Going into CES this year I didn't really know what to expect. Last year's CES was what CES had always been, a Consumer Electronics Show with a few motherboard manufacturers scattered throughout the show. But also remember that last year saw the nail in the coffin for Comdex and most of the companies in the tech industry said that they would instead be at CES, showing off their "convergence" devices as well as some of their conventional PC technology products.

Well, walking the show floor I get the feeling that while some companies do get a clear impression of where we're headed, the vast majority are simply in a confused state of mind. For example, historically I've never found Microsoft's booths at any tradeshow interesting, but for the first time ever at this year's CES, I'd say that the Microsoft booth was by far one of the most interesting. Then I look at other more consumer electronics based companies and I see that they're here at CES promoting the same unintelligent CE devices that they have been for the past several years, maybe with the addition of "HD" to their name.

For years Intel and Microsoft have been talking about this "convergence" between PC technology and consumer electronics and for the first time ever you can actually truly see it happening on a much larger scale than just being able to play your MP3s over your home stereo. At the same time, despite the huge movements forward in this idea of convergence, walking the halls of CES tells me plain and simple that the road to convergence is still a very long one. There are far too many companies that still don't get it and there's still a lot of network infrastructure that needs to be in place before companies can really begin to offer some cooler convergence products. 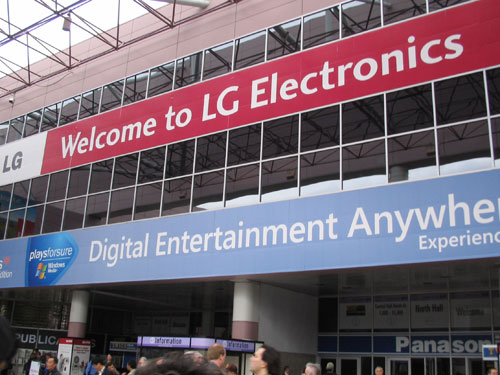 So this year's CES ends up being far from a smoothly integrated show featuring consumer electronics, PC technology and the futures of both. Very few showcases and demos actually presented the convergence of all three, with far more displaying segregated products falling into each individual category. Not that this is a bad thing, it's just more of a wake up call that there's still a lot of work to be done.

That being said, the CES show itself this year is absolutely massive. Transportation to and from the show and meetings is basically impossible unless you have a car or are close to a monorail station. The upwards of 120,000 CES attendees have put a full strain on the Las Vegas taxicab system, making waiting for a cab during CES show hours a 1.5 - 2 hour ordeal. The organizers of CES will make things even more difficult next year as they revisit the Comdex legacy and add a third location to CES - the Sands Expo Center connected to the Venetian hotel in Las Vegas (which always proved to make scheduling meetings and covering the show fun).

With the show over and the AnandTech team out of Vegas, we can finally bring you coverage of the highlights of this year's Consumer Electronics Show.