Core-to-Core Latency: Issues with the Core i5

For Intel’s Comet Late 10th Gen Core parts, the company is creating two different silicon dies for most of the processor lines: one with 10 cores and one with 6 cores. In order to create the 8 and 4 core parts, different cores will be disabled. This isn’t anything new, and has happened for the best part of a decade across both AMD and Intel in order to minimize the number of new silicon designs, and also to build in a bit of redundancy into the silicon and enable most of the wafer to be sold even if defects are found.

So imagine a 10c die as two columns of five cores, capped on each end by the System Agent (DRAM, IO) and Graphics, creating a ring of 12 stops that data has to go through to reach other parts of the silicon. Let us start simple, and imagine disabling two cores to make an 8c processor. It can be pretty straightforward to guess the best/worst case scenario in order to get the best/worst core-to-core latency 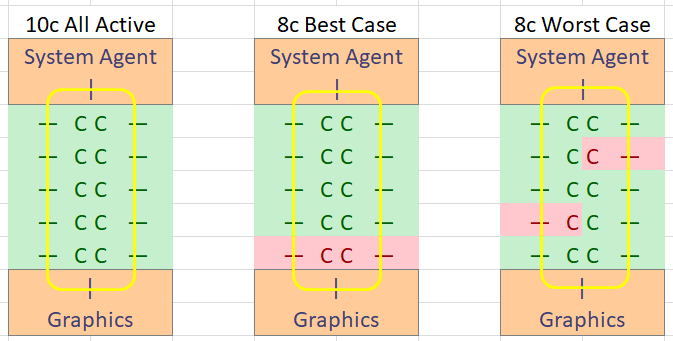 The other worst 8c case might be to keep Core 0 enabled, and then disable Core 1 and Core 2, leaving Core 3-9 enabled.

We can then disable four cores from the original 10 core setup. It can be any four cores, so imagine another worst case and a best case scenario. 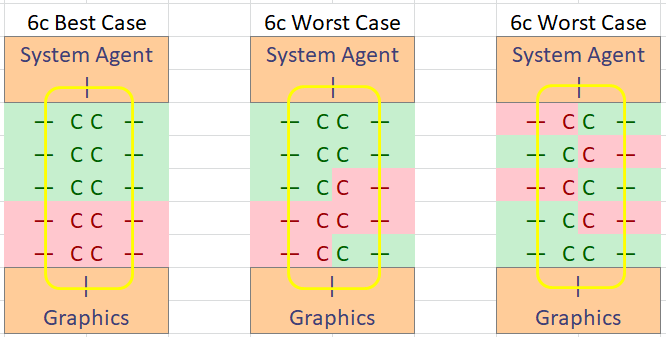 On the left we have the absolute best case arrangement that minimizes all core-to-core latency. In the middle is the absolute worst case, with any contact to the first core in the top left being a lot higher latency with more distance to travel from any core. On the right is an unbalanced design, but perhaps a lower variance in latency.

When Intel disables cores to create these 8c and 6c designs, the company has in the past promised that any disabling would leave the rest of the processor ‘with similar performance targets’, and that while different individual units might have different cores disabled, they should all fall within a reasonable spectrum.

So let us start with our Core i5-10600K core-to-core latency chart.

Cores next door seem well enough, then as we make longer trips around the ring, it takes about 1 nanosecond longer for each stop. Until those last two cores that is, where we get a sudden 4 nanosecond jump. It’s clear that the processor we have here as a whole is lopsided in its core-to-core latency and if any thread gets put onto those two cores at the end, there might be some questionable performance.

Now it’s very easy to perhaps get a bit heated with this result. Unfortunately we don’t have an ‘ideal’ 6c design to compare it against, which makes comparisons on performance to be a bit tricky. But it does mean that there is likely to be variation between different Core i5-10600K samples.

The effect still occurs on the 8-core Core i7-10700K, however it is less pronounced.

There’s still a sizeable jump between the 3 cores at the end compared to the other five cores. One of the unfortunate downsides with the test is that the enumeration of the cores won’t correspond to any physical location, so it might be difficult to narrow down the exact layout of the chip.

Moving up to the big 10-core processor yields an interesting result:

So while we should have a steadily increasing latency here, there’s still that 3-4 nanosecond jump with two of the cores. This points to a different but compounding issue.

Our best guess is that these two extra cores are not optimized for this sort of ring design in Comet Lake. For their Core lineup of processors, Intel has been using a ring bus as the principle interconnect between its cores for over a decade, and we typically see them on four and six core processors. Intel also used a ring bus in its enterprise processors for many years, with chips up to 24 cores, however those designs used dual-ring buses in order to keep core-to-core latency down. Intel has put up to 12 cores on a single ring, though broadly speaking the company seems to prefer keeping designs to 8 or fewer cores per ring.

If Intel could do it for those enterprise chips, then why not for the 10 core Comet Lake designs here? We suspect it is because the original ring design that went into consumer Skylake processors, while it was for four cores, doesn’t scale linearly as the core count increases. There is a noticeable increase in the latency as we move from four to six and six to eight core silicon designs, but a ten-core ring is just a step too far, and additional repeaters are required in the ring in order to support the larger size.

There could also be an explanation relating to these cores also having additional function on that section of the ring, such as sharing duties with IO parts of the core, or PCIe lanes, and as a result extra cycles are required for any additional cacheline transfers.

We are realistically reaching the limits of any ring-line interconnect for Intel’s Skylake consumer line processors here. If Intel were to create a 12-core version of Skylake consumer for a future processor, a single ring interconnect won’t be able to handle it without an additional latency penalty, which might be more of a penalty if the ring isn't tuned for the size. There's also a bandwidth issue, as the same ring and memory has to support more cores. If Intel continue down this path, they will either have to use dual rings, use a different interconnect paradigm altogether (mesh, chiplet), or move to a new microarchitecture and interconnect design completely.

We also performed our frequency ramps on all three processors. Nothing much to say here – all three CPUs went from 800 MHz idle to peak frequency in 16 milliseconds, or one frame at 60 Hz. We saw the peak turbo speeds on all the parts. 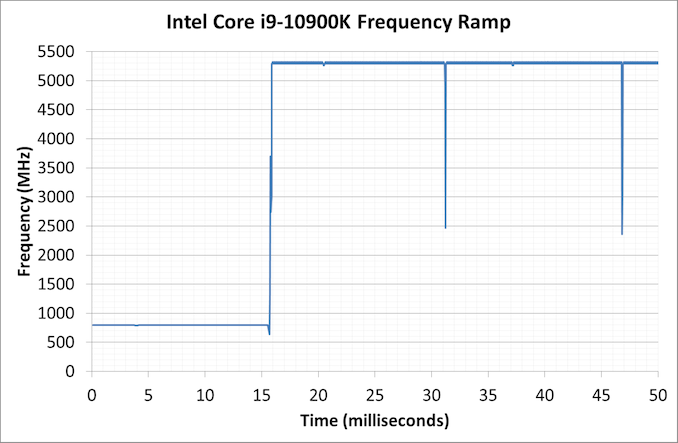 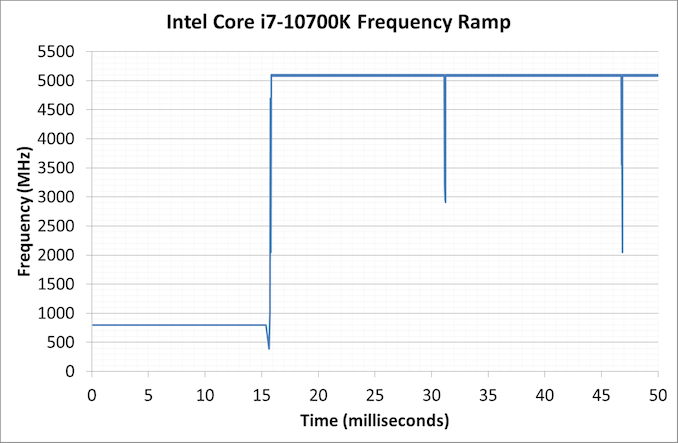 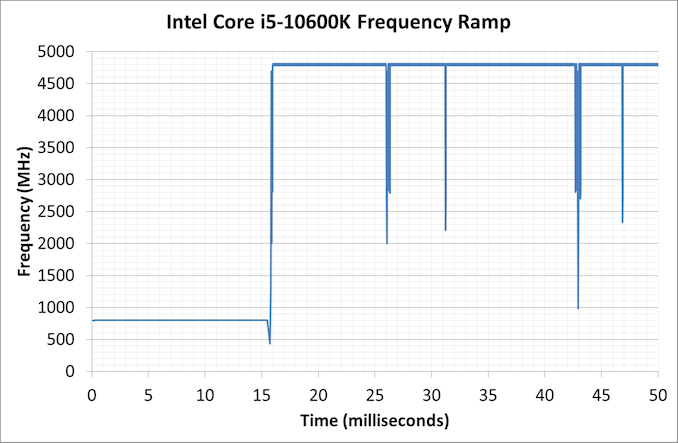