A few weeks ago, we started investigating the possibility of putting Linux on an XBOX. We played with some ideas in our heads, a render farm, a cheap office computer or a distributed crypto platform, just to start. The idea required a little bit of elbow grease, a mod chip, Linux and a bunch of free time.

All XBOXes are locked into only booting the Microsoft BIOS. That is, if you buy a new XBOX, it's basic IO does not let you do all that much, except read DVDs, and XBOX games that have special keys encoded into them. A mod chip is a computer chip with another BIOS that physically overrides the Microsoft BIOS. Since the chip is now in charge of how the XBOX should bootstrap itself, it will allow the XBOX to recognize more discs and operations than for what the XBOX is specifically designed. Thus, backup games or entire operating systems can be loaded onto the XBOX hard drive and run from there.

People have been modifying their XBOXes to run Linux for a long time now. The main factor behind the XBOX modification scene sprung from some extremely gray markets that began selling mod chips for backup games. However, after several years now, the XBOX Linux community has grown very stable. XBOX runs on virtually off-the-shelf components; ergo, porting Linux to the XBOX was a no-brainer after the BIOS issue was resolved. Microsoft dropped the price of XBOXes a few months ago and BMMods approached us about the possibility of checking out Linux on an XBOX. With refurbed and used XBOXes as cheap as they have ever been right now, the stage was set for us to abuse as much XBOX as possible. 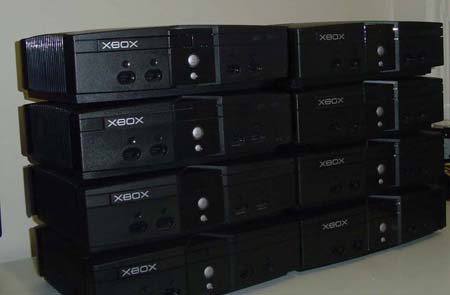 
The goal today is to see if we can modify an XBOX successfully to do something useful that we can't do for the cost of the modification (aside from play XBOX). We will look at a media center, a basic PC and finally, a lot at the possibility of setting our XBOXes up in some sort of cluster, with detailed steps all along the way.