While the world turned I was on a flight over to Taiwan to meet and discuss future products with just about every Taiwanese Motherboard and Video Card manufacturer I could get a meeting with. The discussions yielded a great deal of important information, such as roadmap updates, a better understanding of some of the current supply shortages and some insight into how the markets here in Taiwan and globally were holding up. While I'll talk about most of these topics in a separate article, I couldn't resist but post information on a very interesting product I managed to get some "alone-time" with while in Taiwan.

Just a few weeks ago our own Wesley Fink and I traveled to NYC to meet with NVIDIA and, more importantly, to get some first hand experience with nForce4 and nForce4 SLI platforms. As you'll know from our previous coverage on the topic, nForce4 SLI is the highest-end nForce4 offering outfitted with a configurable number of PCI Express lanes. The beauty of having a configurable number of PCI Express lanes is that you can have a single PCI Express x16 slot, or you can split that one slot into two x8 slots - which is perfect for installing two graphics cards in.

NVIDIA is less than a month away from sending final shipping nForce4 SLI boards out to reviewers, but we managed to get some quality benchmarking time with a pre-release nForce4 SLI board from MSI. The important thing to note here is that it was pre-release and we had a very limited amount of time with it - not to mention that I'm about halfway around the world from my testing equipment and benchmarks, so forgive me if the number of tests or benchmarks is not as complete as you're used to seeing on AnandTech. 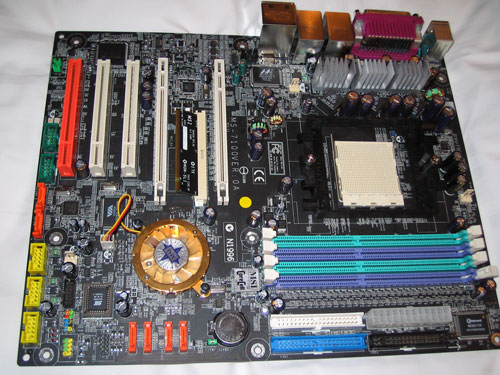 The MSI motherboard we tested is actually the very first working sample of the K8N Neo4 Platinum/SLI; in fact, as of right now there are only 4 working nForce4 SLI samples at MSI in Taiwan, two of which happen to be in my hotel room. Despite the early nature of the motherboard, it was 100% stable and didn't crash once during our hours of testing nor in the 12 hours of burn-in before that. There were some rendering issues during some of the testing but we'd chalk that up to drivers that need some work; one thing to keep in mind is that SLI is extremely driver intensive and we'll explain why in a moment. Please be sure to read our nForce4 review and SLI preview before continuing on with this review to understand what's behind nForce4 and SLI.

We did not have time to run a full gamut of benchmarks, so all of our tests are limited to 1024 x 768, 1280 x 1024 and 1600 x 1200 with 4X AA enabled. We tested using an Athlon 64 FX-55 with 1GB of Corsair DDR400 under Windows XP Professional with DX9c. Finding game benchmarks was a bit of a challenge in Taiwan, but despite the Chinese boxes our copies of Doom 3 and Far Cry were basically the english versions. We also included the Counterstrike: Source Visual Stress Test in our impromptu test suite. But before we get to the benchmarks, let's talk a little bit about how you actually get SLI working.