The ASUS ROG Phone II’s system performance is naturally of double interest: First of all, it’s actually the first Snapdragon 855+ based phone we’ve gotten to benchmark here at AnandTech. We don’t have too high expectations over the meagre clock frequency increase of the Prime core from 2.84 to 2.96GHz, but possibly ASUS’ tuning and the X Mode might be able to differentiate performance a bit more above what we see in other Snapdragon 855 devices out there.

We’re testing the phone in both its default out-of-the-box mode, as well as the X Mode: 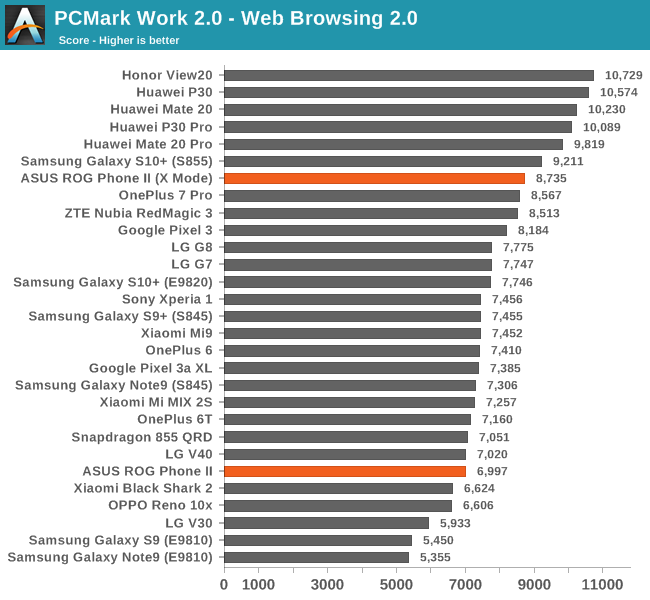 In the PCMark Web Browsing test, we already see quite a bit difference between the two operating modes. The default mode is quite conservative as is matching the lowest scores that we’ve seen of other Snapdragon 855 phones.

X Mode on the other hand seems to increase the performance here to be more equal in behaviour to that of the Galaxy S10 – the best performing S855 device in this test. It’s to be noted that this test is also very sensitive to various DVFS shenanigans – for example the score might go up quite dramatically if the vendor decides to peg the frequencies to a higher minimum frequency. X Mode in this regard doesn’t behave this way and still properly scales along the full frequency curve – albeit doing it in a much more aggressive manner. 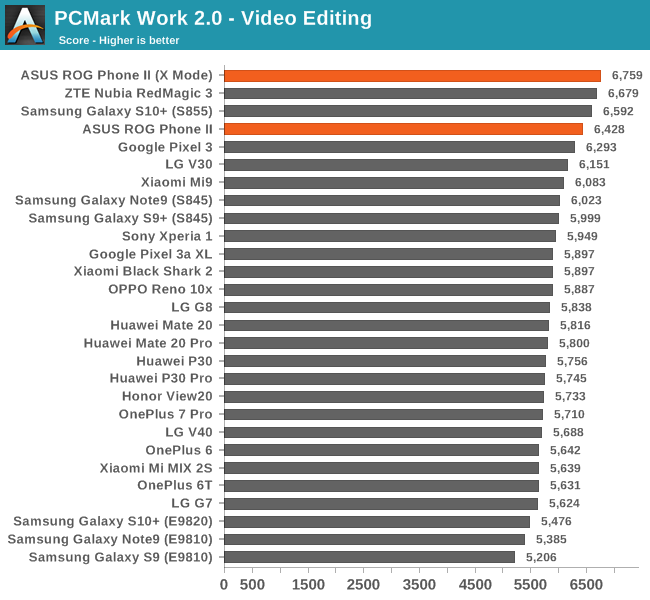 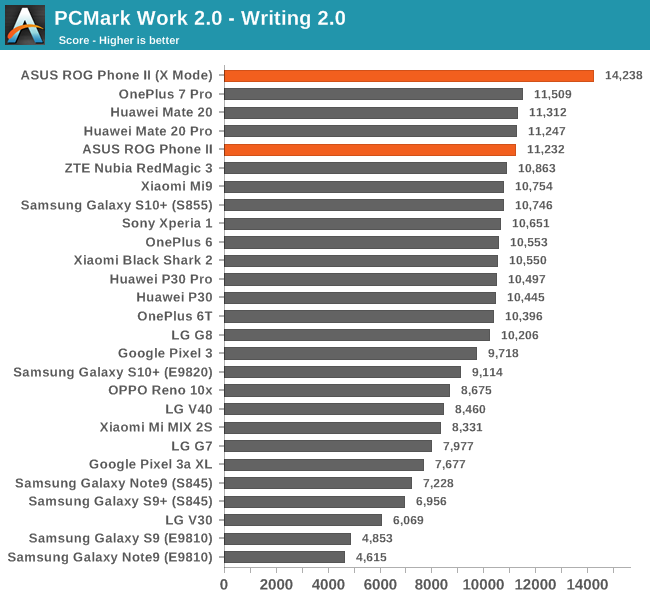 The writing sub-test is one of the most representative of overall performance of a phone. In the default mode the ROG Phone II performs well and is amongst the top S855 devices. Turning on X Mode makes the RP2 stand out amongst its competitors. 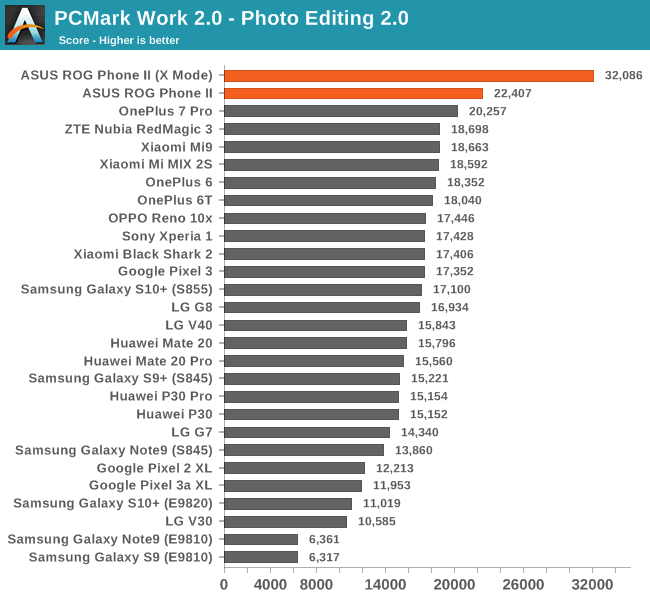 In the Photo editing test, the RP2 performs the best in both its modes. The higher scores here can also be attributed to the higher GPU frequency of the S855+ SoC in the device. 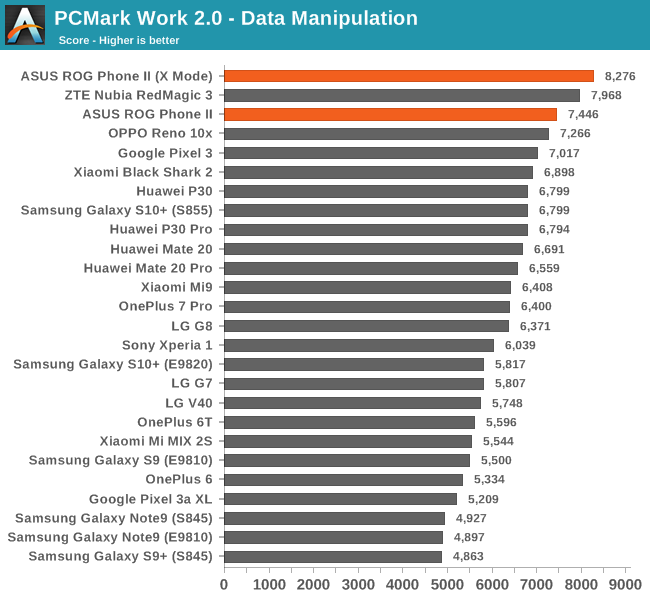 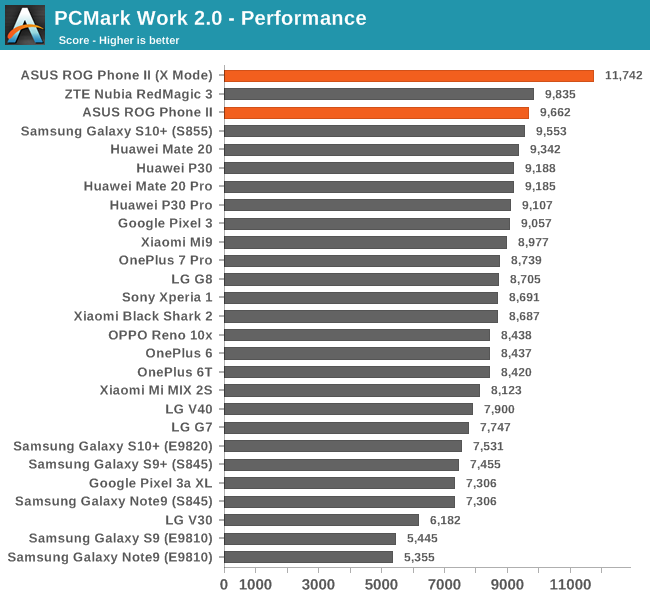 Overall, the RP2 lands in as one of the most performing phones on the market, and the X Mode in particular puts it ahead by a large margin. It would come at a cost of power efficiency, but with a 6000mAh battery, the RP2 shouldn’t worry too much about that. 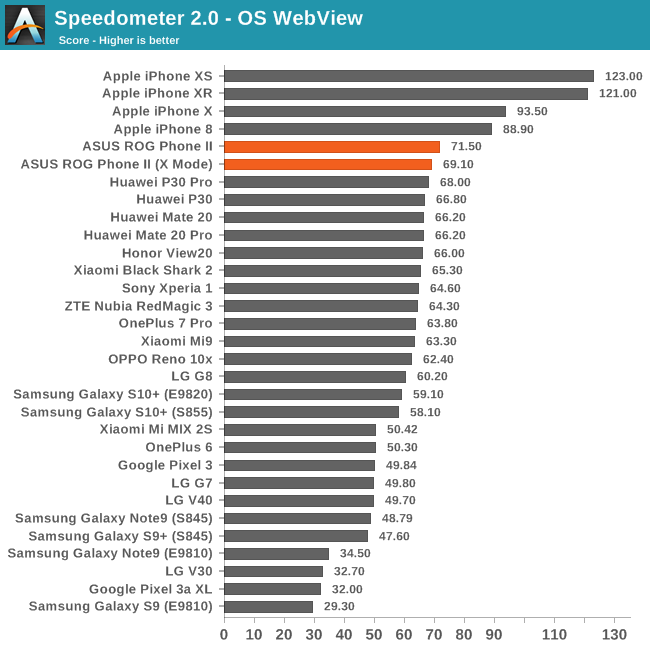 In the web browsing benchmarks, the RP2 oddly falls a bit behind in Speedometer when enabling X Mode. Given that the test is a continuous workload with high load, the different scaling modes should indeed not affect it, but it’s still a bit odd to see the minor regression. 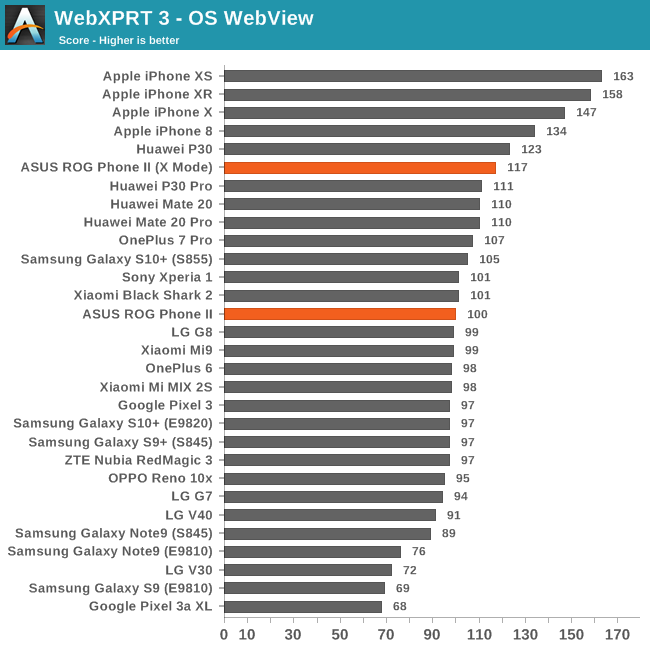 In WebXPRT 3, we’re seeing a more expected scaling between the two modes. The ROG Phone II here is able to take almost the highest scores amongst Android devices, just falling short of the Huawei P30.