Video recording on the iPhone is known to be extraordinarily good in terms of quality. The iPhone 11 series is said to improve in this regard thanks to an improved HDR with more dynamic range (though Apple still stores video in SDR format). Naturally of course what’s also exciting is that we’re now able to capture video with a wide-angle lens, and seeing a lot more content of a given scene.

Apple has improved the EIS this generation, and it now results in a much smoother video capture experience than the past iterations. When you have with a lot of detail in a scene though, you can sometimes see the jitter caused by the OIS and EIS interacting with each other.

In the wide-angle recording, the EIS was a bit haphazard. In the first part of the video walking down the path it doesn’t look to be stabilizing much at all, when I turn left to the second path suddenly the EIS kicked in and things were a lot less shaky, and it then again loses the stabilization for few steps until it finally resumes again. This happened all three recordings with the wide-angle camera, and I don’t know it was me holding the phone any different between those two paths.

The quality and detail of the videos are all great. The one thing noticed though is that there’s the occasional exposure flicker in some areas. In effect Apple here is doing two exposures per frame and combining them together like Smart HDR – we can notice that in parts of the scene, and most visible the sky is flickering or pulsing in brightness.

The handling between the three camera sensors is very good, it’s particularly fast and seamless to switch between the main and wide-angle modules, while there’s a small delay to switch to the telephoto module. Switching between the three modules is only possible in 30fps recording modes; it’s still possible to record 60fps in any of the three modules but you have to start out the video with the camera that you want to use, and you’ll be limited to digital zooming only while recording.

In terms of audio for the iPhone 11 series, Apple’s big addition is the inclusion of Dolby Atmos. Naturally you have to watch multi-channel audio content to be able to take advantage of the feature. For regular stereo audio playback, we investigate if Apple has done any changes to the speaker setup and if it differs to that of the XS. 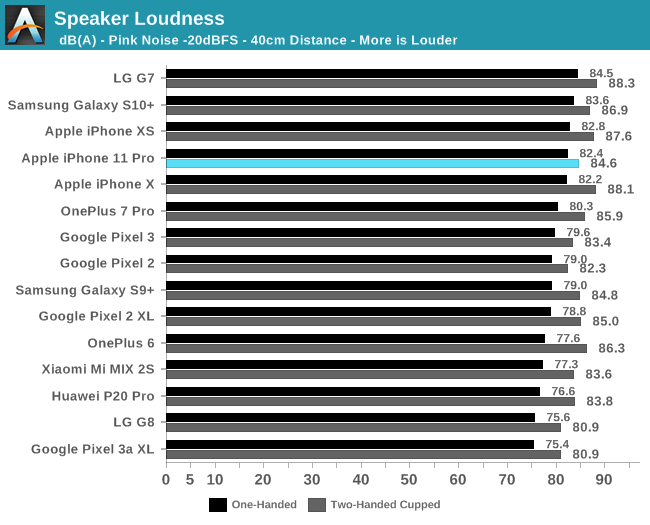 In terms of audio volume, the iPhone 11 Pro is ever so slightly quieter when being held in portrait mode. The bigger difference that’s definitely more audible is when holding the phone in landscape mode with both hands and the palms cupped – the usual way one would hold a phone in landscape. Here it’s 3dB quieter than the iPhone XS, which is a noticeable amount. 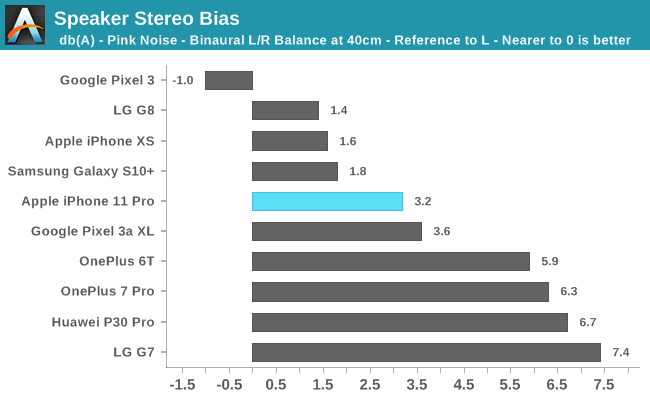 Investigating the phone’s stereo bias thanks to a binaural microphone setup, we see that that things have notably regressed for the iPhone 11 Pro when compared to the XS. It’s relatively normal for the main speaker (Right side) to appear louder, however it’s extremely weird that it’s now 1.6dB more biased than on the iPhone XS. Indeed when comparing the 11 Pro and XS side-by-side, and muting the main speaker by holding a finger on it, volume being equal and otherwise calibrated between the two phones, it’s immediately audible that the 11 Pro earpiece speaker is much quieter compared to what we experience on the XS.

This has a rather large knock-on effect on the spatial sound reproduction of the 11 Pro as it just isn’t able to fill up the surrounding area quite as well as on the XS. 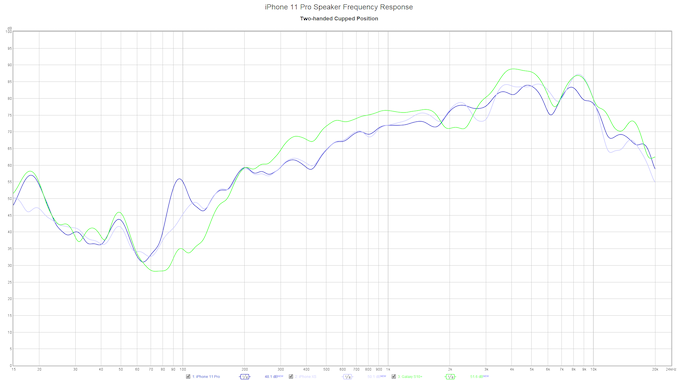 Looking at the frequency response between the 11 Pro and the XS, we see that things are extremely similar up to the high mid-ranges, with a more noticeable peak at 95Hz for the 11 Pro. Towards the treble we see some more deviations, it’s here that the 11 Pro is a bit quieter and I think that’s due to the weaker earpiece speaker.

Overall, the sound signature of the iPhone 11 Pro hasn’t changed all too much, and it is actually more of a downgrade in audio playback due to the weaker earpiece speaker calibration. The Galaxy S10’s notably stronger lower mid-range and mid-range still make for a much superior audio playback and is in my experience the device to beat in terms of speaker quality.