So why all this talk about how each company does its Turbo functionality, as well as its binning strategy? I prepped this story with the differences because a lot of our user base still thinks in terms of Intel’s way of doing things. Now that AMD is in the game and carving its own path, it’s important to understand AMD’s strategy in the context of the products coming out.

With that in mind, let’s cover AMD’s recent news.

Ever since the launch of Zen 2 and the Ryzen 3000 series CPUs, AMD has done its usual of advertising core counts, base frequency, TDP, and turbo frequencies. What has occurred since initial launch day reviews and through the public availability has been that groups of enthusiast users, looking to get the most out of their new shiny hardware, have reported that their processors are not hitting the turbo frequencies.

If a processor had a guaranteed 4.4 GHz turbo frequency, users were complaining that their peak turbo frequencies observed were 25-100 MHz less, or in some cases more than 100 MHz down on what was advertised. This kind of drop in frequency was being roughly reported through the ecosystem, but no-one particularly acted on it until these past few weeks, around the same time that AMD had several other news stories going on.

Multiple outlets, such as Hardware Unboxed, noted that the frequencies they were seeing significantly depended on the motherboard used. Hardware Unboxed tested 14 different AMD AM4 motherboards (some X570, others not X570) with a Ryzen 7 3800X, expecting a peak turbo frequency during Cinebench R20 of 4.5 GHz. Only one motherboard was consistent across most CPUs, while a few others were hit and miss. 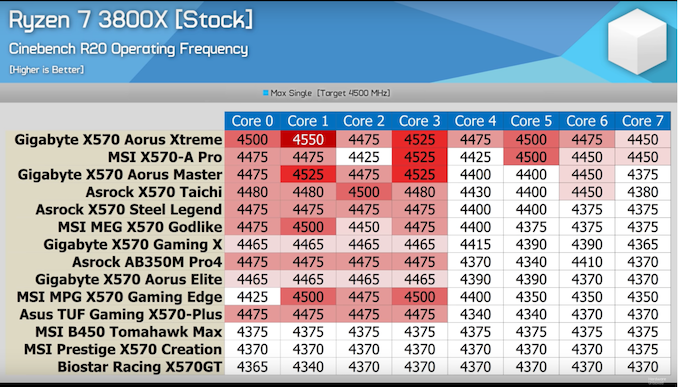 This obviously plays into some reasoning that the turbo is motherboard dependent, all else being equal. It should be noted that there’s no guarantee that all these motherboards, despite being on the latest BIOSes, actually had AMD’s latest firmware versions in place.

Another outlet, Gamers Nexus, also observed that they could guarantee a CPU would hit its rated turbo speeds when the system was under some form of cold, either chilled water or a sub-zero cooling environment. This ultimately would lead some believe that this relates to a thermal capacity issue within the motherboard, CPU, or power delivery.

The Stilt, a popular user commonly associated with AMD’s hardware and its foibles, posted on 8/12 that AMD had reduced its peak temperature value for the Ryzen 3000 CPUs, and had introduced a middle temperature value to help guide the turbo. These values would be part of the SMU, or System Management Unit, that helps control turbo functionality.

Peter Tan, aka Shamino, a world renowned (retired) overclocker and senior engineer for ASUS’ motherboard division, acknowledged the issue in a forum post on 8/22 with his own take on the matter. He stated that AMD’s initial outlay with its turbo boost behavior was ultimately too aggressive, and in order to ensure longevity of the chip, the boost behavior was in line with what AMD needed to achieve that longevity.

It should be stated here that Shamino is speaking here in his personal capacity.

For those not engrained in the minutae of forum life, the biggest arrow to this issue came from Roman Hartung, or Der8auer, through his YouTube channel. He enlisted the help of his audience to tabulate what frequencies users were getting.

In the survey, the following details were requested:

Now obviously when it was announced that this survey was going to happen, Roman and AMD discussed behind the scenes the pros and cons about this survey. As you might expect, AMD had some reservations that this survey was in any way going to be fair – it’s about as unscientific as you can get. Naturally Roman argued that these would be real world results with users machines, rather than in-lab results, and AMD should be guaranteeing users on their home machines with specific frequency values. AMD also pointed out that with this sort of survey, you have an inherent selection bias: users who feel negatively impacted by any issue (through AMD’s fault or the users own) are more likely to respond than those that were happy with the performance. Roman agreed that this would be a concern, but still highlighted the fact that users shouldn’t be having these issues in the first place. AMD also mentioned that the Windows version couldn’t be controlled, to which Roman argued that if turbo is only valid for a certain Windows version, then it’s not fair to promote it, however did concede that the best performance was the latest version of Windows 10, and users on Windows 7 will have to accept some level of reduced performance.

Roman and AMD did at least agree on a testing scenario in order to standardize the reporting. Based on AMD’s recommendations, Roman requested from his audience that they use CineBench R15 as a single threaded load, and HWiNFO as the reporting tool, set to a 500 millisecond (0.5 second) polling interval, with the peak frequency from the CPU listed.

The survey ended up with ~3300 valid submissions, which Roman checked one-by-one to make sure all the data was present, screenshots showed the right values, and removed any data points that didn’t pass the testing conditions (such as PBO enabled). The results are explained in Roman’s video and the video is well worth a look. I’ve summarized the data for each CPU here.

I have corrected a couple of Roman’s calculations based on the video data, but they were minor changes.

On the positive, the modal reported CPU frequency for almost all chips (except the 3900X) is relatively close, showing that most users are within 25-50 MHz of the advertised peak turbo frequency. The downside is that the actual number of users achieving the rated turbo is quite low. Aside from the Ryzen 5 3600, which is 50%, all the other CPUs struggle to see rated turbo speeds on the box.

As you might imagine, this data caused quite a stir in the community, and a number of vocal users who had invested hard earned money into their systems were agonizingly frustrated that they were not seeing the numbers that the box promised.

Before covering AMD’s response, I want to discuss frequency monitoring tools, turbo times, and the inherent issues with the Observer Effect. There’s also the issue of how long does turbo need to be active for it to count (or even register in software).