Overall, the voltages being used for the RTX 2080 Super are not any different than NVIDIA’s other TU104 cards – or any of their other Turing cards, for that matter. At its highest clockspeeds the card runs at 1.05v, quickly stepping down to below 1v at lower clockspeeds. The 0.65v idle voltage is among the lowest we’ve ever recorded for an NVIDIA card, however.

Looking at clockspeeds, we can piece together a couple of interesting pieces of information. On the clockspeed side, NVIDIA hasn’t actually changed the card’s maximum clockspeed all that much. Our RTX topped out at 1900MHz, and the RTX 2080 Super is only a bit higher at 1965MHz. That they’re doing it without more voltage is a bit more interesting – it looks like chip quality may have improved a bit over the past year – but not too surprising.

What is more surprising however are the average clockspeeds we recorded for the RTX 2080 Super. In short, the card spends a lot of time at or near its top turbo bins. With temperature compensation active, our RTX 2080 Super tops out at 1937MHz; a clockspeed that it holds at for over half of our games even at 4K. Quite frankly the RTX 2080 Super is almost a boring card in this respect (in a good way); there’s just not much in the way of power throttling going on here. If anything, the hard part is getting the card above 90-95% power usage.

This, ultimately, is why the RTX 2080 Super is as fast as it is versus the vanilla RTX 2080. The extra SMs help, but it’s the extra 100-150MHz on the GPU clockspeed that’s really driving the card. 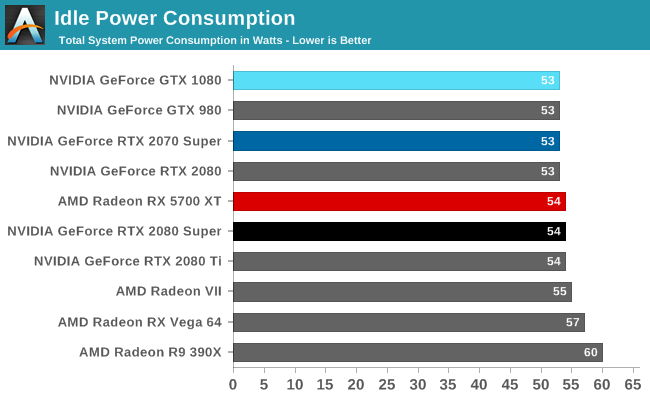 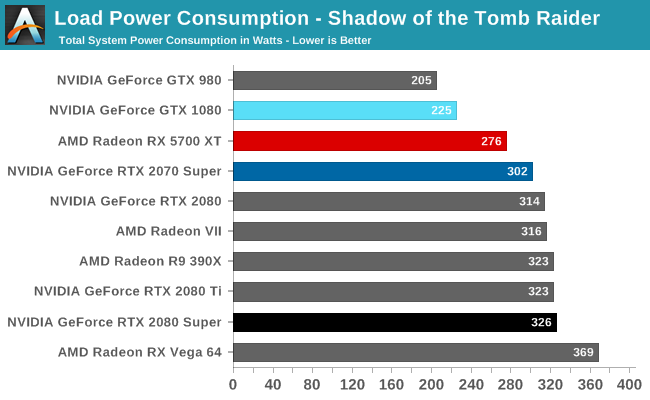 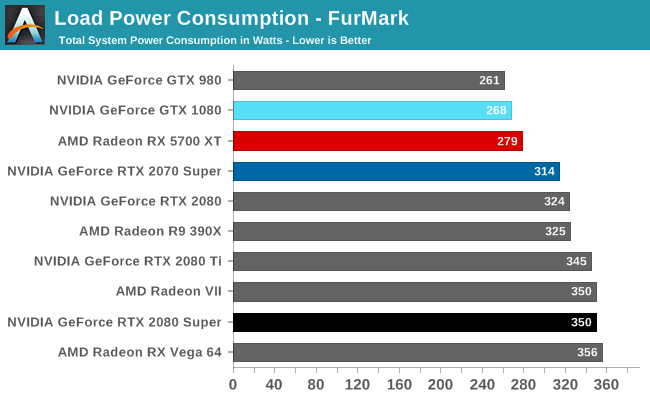 Getting to power consumption itself then, idle is effectively unchanged, exactly as we’d expect it. Load power, on the other hand, is paying the price for those 1900MHz+ clockspeeds. Under both FurMark and Tomb Raider, our RTX 2080 Super-equipped system is drawing almost the same amount of power as the RTX 2080 Ti system with a difference of just a few watts. That performance doesn’t come for free. NVIDIA’s overall power efficiency is still quite good here (the Radeon VII won’t be touching it, for example), but it’s clearly regressed a bit versus the RTX 2080 Ti and vanilla RTX 2080.

It is worth noting, however, that often the card was clockspeed-limited rather than power limited. So while Tomb Raider was specifically picked to be a punishing game – a task it delivered on here – I fully expect that the RTX 2080 Super is drawing a bit less than the RTX 2080 Ti in around half of our other games. 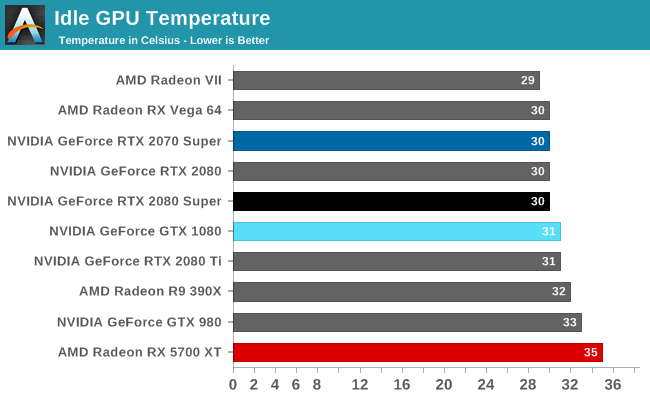 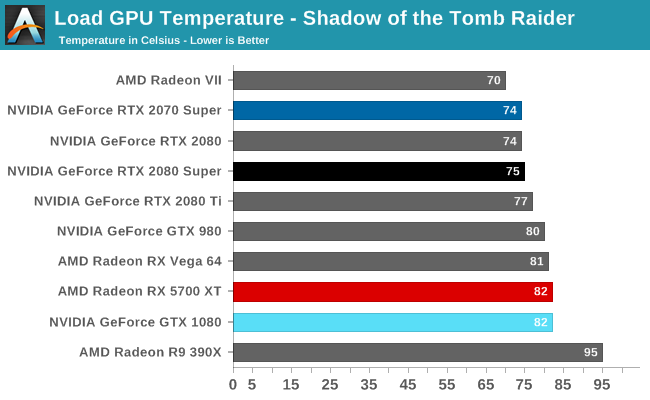 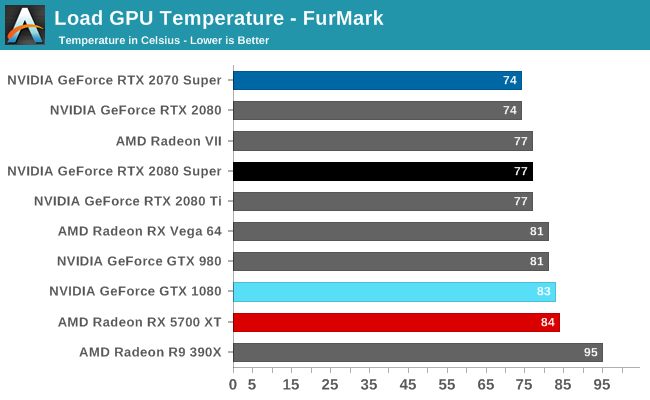 With higher power consumption and the same cooler comes higher temperatures. Even FurMark’s 77C is still several degrees below the card’s 84C thermal throttle point, but it is a very straightforward consequence of the increased power consumption. 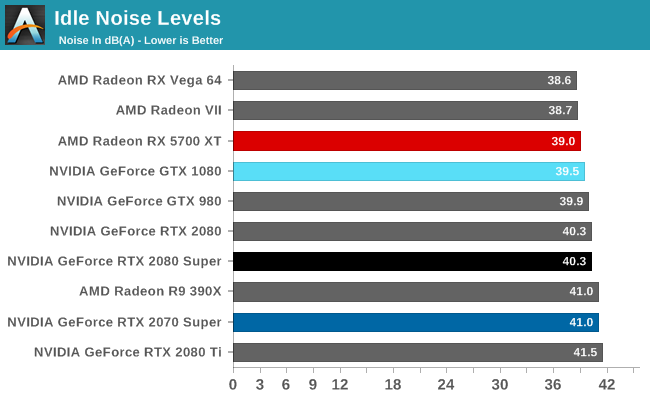 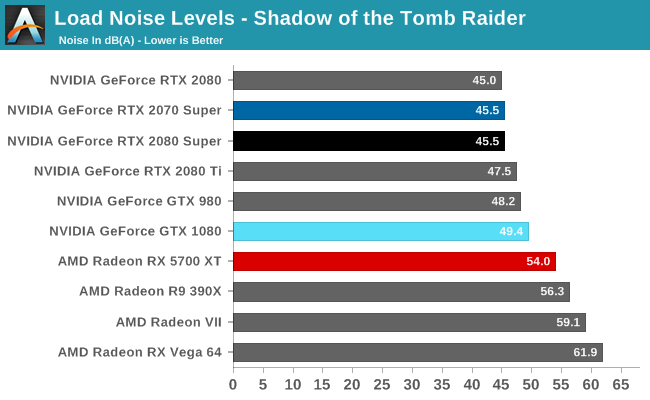 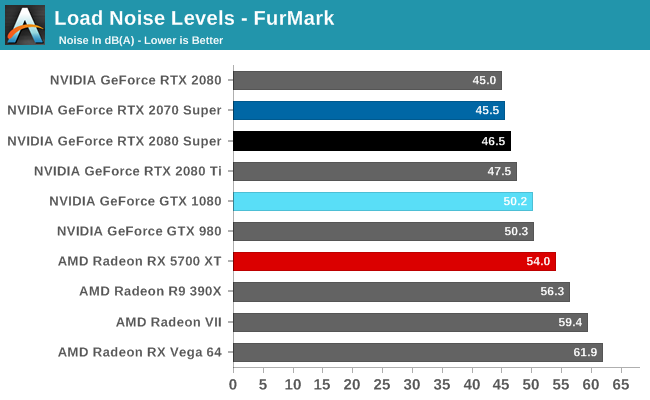