All things considered, it’s been a while since we’ve had anything approaching a complete mid-generation refresh from NVIDIA. After doing 2-year cycles with the GeForce 900 and GeForce 10 series, the company could seemingly do it again with the 20/16 series – and certainly, that’s where their GPU development cadence lies. However the launch of AMD’s capable Radeon RX 5700 series of cards, not to mention the slugging sales of the original GeForce 20 series cards, has changed all of this just enough to give NVIDIA a good reason to release a refreshed line of cards. And of the three Super cards, today we’re finally seeing the fastest of them all, the GeForce RTX 2080 Super.

To be sure, the RTX 2080 Super is the smallest performance jump of any of the Super cards. While the other cards delivered around 15% better performance per dollar than their vanilla predecessors, the RTX 2080 Super is only about half that, at 8%. Which is enough to be meaningful and enough to justify a new SKU (especially with the hardware changes), but it’s not a card that changes the video card calculus significantly. Instead, it’s exactly what it says on the tin: a slightly faster 2080 delivering a bit more performance (and performance per dollar) than before. 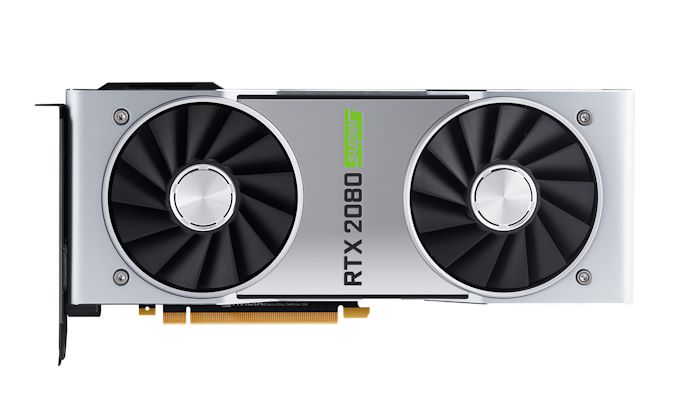 Buried inside of this – and making an otherwise by-the-books launch into something a bit more interesting – is NVIDIA’s choice of VRAM. 16Gbps GDDR6 has been on the development roadmaps for quite some time, and now we finally have a video card using it. Bumping up their memory frequency – even if it’s just to 15.5Gbps – was a good choice to ensure that the card remained well-fed after NVIDIA turned up the clocks on the fully-enabled TU104 GPU.

And looking at the broader picture, this is one of those small but important steps in ensuring that video card performance continues to grow over the coming years. With everyone seemingly done launching cards for now, I’m not sure we’ll see 16Gbps memory show up anywhere else, but it’s a good sign that come 2020, Samsung and the other memory manufacturers will be ready to deliver much-needed higher capacity memory at the same 16Gbps speeds.

Meanwhile, if there is a downside to the RTX 2080 Super from a technical perspective, it’s power consumption. The 250W TDP card actually struggles a bit to chow down on all 250 Watts, so in the real-world the card isn’t always as thirsty as the paper specs say. However it’s still requires more power than the RTX 2080 vanilla, and the increase is more than the associated 8% performance increase. So NVIDIA’s overall power efficiency on this card, while still reasonably good, is lower than other high-end Turing cards.

As for what all of this means for video card buyers then, the situation remains relatively straightforward. AMD’s Radeon VII never really got traction in this space, and the RTX 2080 Super will clear the field. At $699, it’s the best option by far, and as a result it’s really the only option.

Instead, the lingering question is the cards below and above the RTX 2080 Super, namely the RTX 2080 Ti, RTX 2070 Super, and AMD’s Radeon RX 5700 XT. As far as the RTX 2080 Ti is concerned, it’s still a distinctly faster card, delivering around 18% better performance at 4K, and all at the same power consumption, no less. It’s also $450 more expensive, which was hard to justify before the RTX 2080 Super launched, and is even harder to justify post-Super. That card has its place in the world – it is after all the fastest GeForce – but it’s definitely a card you buy only if you can truly part with the money. Otherwise, the RTX 2080 Super is a bit of a spoiler, which its much better performance-per-dollar ratio.

Equally spoiling matters from the other end, however, are the RTX 2070 Super and Radeon RX 5700 XT. These cards are distinctly slower than the RTX 2080 Super – the 2080 leads the 2070 by 14%, for example – but then they’re $200 and $300 cheaper respectively. As a result, while they aren’t in the same performance tier, they offer even better performance for the money than the RTX 2080 Super. Spoilers are always hard to assign an absolute value to, but I will say that the RTX 2080 Super is almost overpowered for 1440p; at least unless you’re using a high refresh rate display.

As for gamers looking for an upgrade, the limited performance bump on the RTX 2080 Super means that things haven’t really changed here. GeForce 10 series owners who are looking to spend no more than they did last time can easily stay put. Meanwhile the original RTX 2080 was already a solid upgrade for the GTX 980 (Ti), and the RTX 2080 Super improves on that a bit. The GTX 980 Ti launched at almost the same price point, and with the RTX 2080 Super offering almost 2x the performance, it fits the usual upgrade cadence well. The same goes for upgrades from AMD’s Radeon Fury cards, for that matter.

Past that, it seems like after two months of tit-for-tat, the video card industry may be ready to take its own summer vacation. AMD has made their big move, and NVIDIA hasn’t announced any more Super cards. I don’t expect that we’re going to be done for the year – there still needs to be lower-end AMD Navi cards at some point – but barring any more surprises, it looks like the high-end of the market has fallen into place for the next several months. It’s still very much NVIDIA’s market, but the fact that we’re even talking about a refreshed RTX 2080 card means that things have changed, and that they’ve changed for the better.