Kinesis took a huge leap of faith last year with the Kinesis Gaming brand, focusing on ergonomic peripherals designed exclusively with gamers in mind. Following a crowdfunding campaign, Kinesis released the Freestyle Edge, the first mechanical keyboard that combined ergonomics with advanced gaming. Despite the fact that most users do not react positively towards products that stray from the standard designs and layouts – and this is especially true with gamers – the Freestyle Edge did quite well on the market. Now, over a year later, Kinesis has introduced the successor to that keyboard, the Freestyle Edge RGB, a keyboard that adds a whole lot more than just RGB backlighting. 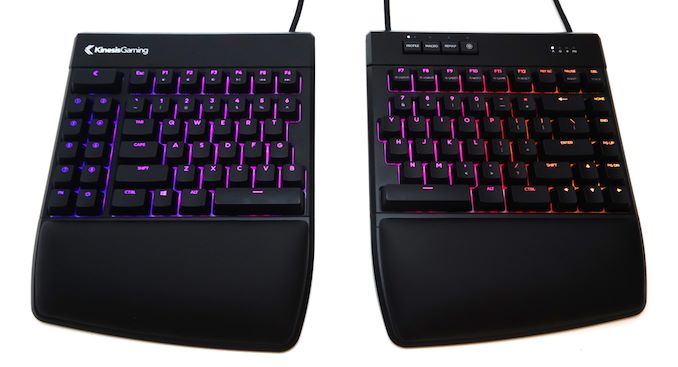 Getting right down to matters, for users coming from more traditional keyboards, the Freestyle Edge RGB’s split layout definitely requires a learning curve. On the other hand, it is definitely more comfortable for long-term use, especially when using the optional lift kit at a low tilt. Using the Freestyle Edge RGB for just a couple of hours is enough to notice that the strain on the arms, fingers, and tendons is greatly reduced, making the keyboard perfect for both professional use and long gaming hours. Gamers will also benefit from the ability to move the right half out of the way and get their mouse straight in front of their arm and towards their body, which is a much more natural and comfortable position for the arm than extending it to the right. For gaming, the Freestyle Edge RGB is a very flexible device, capable of adjusting to virtually any user and/or situation.

Another advantage of the Edge RGB is the integration of all advanced programming into the keyboard itself. The supplied software reprograms the keyboard at the peripheral level, rather than being implemented as a software package that runs on (and is tied to) the host OS. Once programmed, the keyboard does not require any software to perform any of its advanced functions. It will retain its functions when connected to any other system, even if that other system runs an entirely different OS. Some OS-specific commands may not work but that is it. This feature admittedly comes with a drawback – the keyboard cannot perform very complex macros or commands that have to signal the OS, such as launching external applications – so gamers who use third-party macro programming software will want to take note of this.

In some sense then, it's unfortunate that Kinesis integrated so many improvements into the Edge design and merely called it an RGB model, as that significantly undersells what the company has done. Rather than being an RGB-ized version of the original Edge – as is usually the case with "RGB" keyboards – this is a new and improved keyboard in and of itself. In fact even I didn't initially pick up on this; at first I expected the Freestyle Edge RGB to be the same – just a classic Freestyle Edge with RGB switches on it and that’s it, off to the store shelves you go. Instead, Kinesis took their time and gathered feedback, evaluated it, and then restructured the keyboard to improve it. Little adjustments, such as the move of the ESC key back to where it belongs and the fantastic wrist cushions, make a great difference, allowing me to honestly say that the Freestyle Edge RGB is truly a better keyboard than the last year’s version.

All-in-all, the Kinesis Freestyle Edge RGB is a very high-quality keyboard and is made by a company that listens and seems to care a lot about their customer base. For professional users or gamers who spend very long hours in front of a PC, and especially those who switch between different PCs, the Freestyle Edge RGB is a definitely worthwhile investment. Once accustomed to it, your hands and body will verify just how good of an investment the keyboard really is.

If the keyboard has any real drawbacks then – other than a split keyboard not being for everyone – it would be the $220 price tag. Make no mistake, it's a great keyboard that I think is worth the money, but it's very much a premium keyboard in every sense of the word. This, I suspect, is likely why Kinesis is offering a risk-free customer satisfaction plan for the keyboard, allowing buyers to return the keyboard within 60 days if not fully satisfied. 60 days, in turn, should be more than enough time for someone to get used to the keyboard and decide if it is the right product for them – or at least decide if the keyboard is worth the price. Ultimately, if you are considering the purchase of an expensive gaming keyboard and are willing to entertain the thought of checking out an ergonomic design, we strongly advise giving the Freestyle Edge RGB a try.