The nature of the platters in a hard drive (CMR or SMR), unless explicitly mentioned, is not immediately evident from the specifications or even artificial benchmark tests that use a small work set. Even replaying real-world work traces often only provides slight hints about the presence of SMR. Our first tryst with SMR in the lab was the 8TB Seagate Archive HDD, followed by the retail-focused Seagate Innov8. While the Archive HDD (one of the first SMR drives from Seagate that went into mass production) had dismal performance consistency, the Innov8 carried substantially improved firmware that enabled much better overall performance numbers. With the passage of time, Seagate has improved the firmware to such an extent that the tests detailed in the link above can no longer reliably detect the presence of SMR in a drive.

One of the tests we have recently started doing on flash-based storage devices is performance consistency under extremely stressful sequential write workloads. The fio workload used for this purpose was adapted for running on the external hard drives. This 128K sequential write workload was set to span the entire capacity of the drive. First off, we take a look at the processing of this workload on a CMR drive - the WD My Passport 4TB. 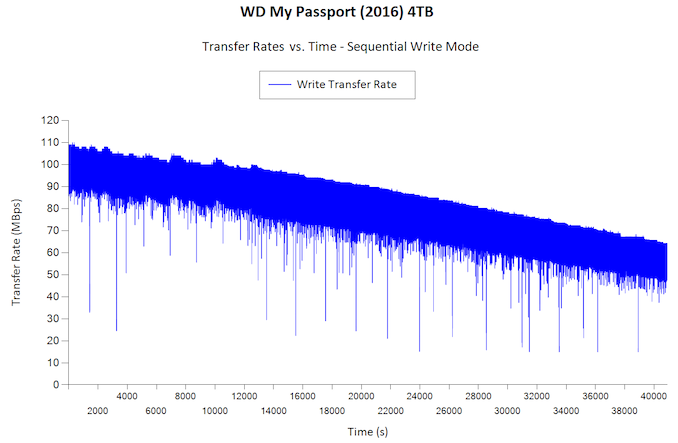 We see the bandwidth numbers between 90 MBps and 110 MBps as we start off at the outer edge of the platters. We see a gradual steady drop down to 50-70 MBps as we move towards the center. This drop (based on the sector location in the drive's platters) is a well-known phenomenon due to the presence of a larger number of sectors on a per-revolution basis as we move further away from the center of the platter.

The Seagate Backup Plus Slim, on the other hand, starts off between 125 and 135 MBps and ends up between 60 and 80 MBps. Worryingly, we have drops down to 10 MBps frequently. It can be seen that the firmware tries to avoid these slow write scenarios as much as possible (almost a hour of sustained sequential writes), but, the amount of traditional PMR space in the platters eventually runs out and the drive is forced to record to the shingled space. This results in the drop of the instantaneous write rates to 10 MBps periodically. 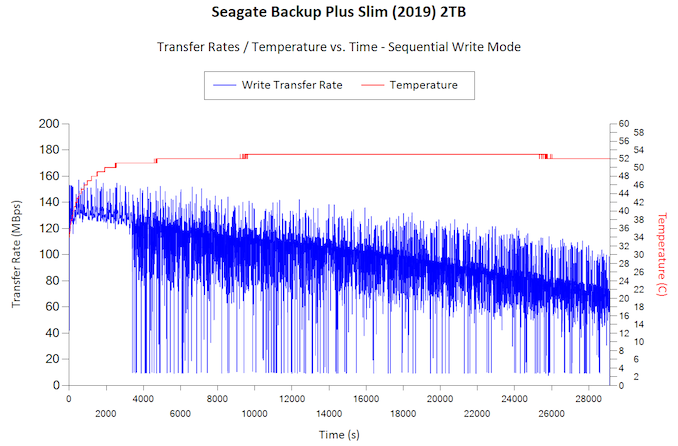 The same behavior is seen in the Seagate Backup Plus Portable 5TB drive also. 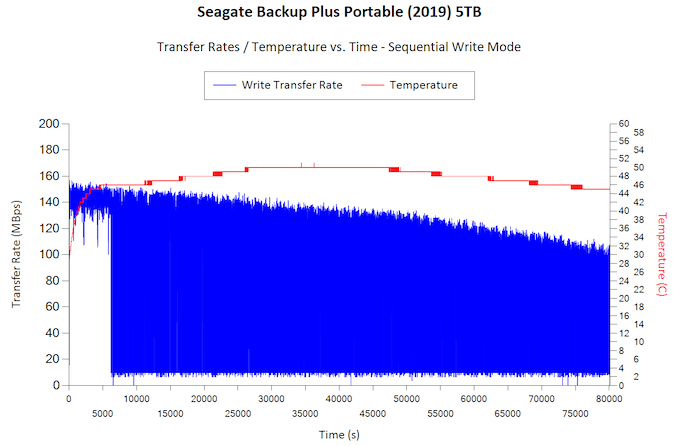 The 5TB drive is actually able to avoid writing to the SMR space for more than 90 minutes before yielding to the inevitable.

Sustained sequential writes for a hour or more are not realistic workloads for a majority of the retail consumers. However, it must be noted that the drop in transfer rates may start to happen after all the non-shingled areas are already filled with data. Thus, once the SMR drive is, say 20 - 25% full, it is likely that users will see considerably worse performance compared to a fresh drive. To test this, we brought back the LaCie Porsche Design Mobile 4TB (also a SMR drive) and filled it to around 14% of the capacity with system images of different PCs created using the System Image Backup native utility in Windows. The same data was also used to put the other hard drives in the 'used' state.

A system image of the testbed was then taken on the extrnal drive, while the read and write transfer rates to the drive were monitored. 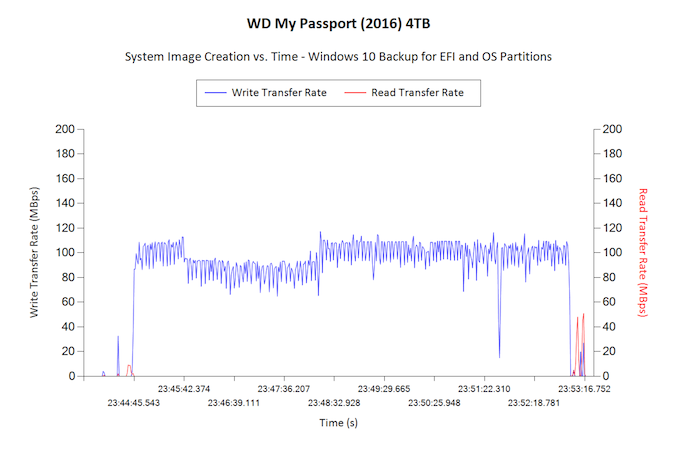 The WD My Passport 4TB shows the system image write out being consistently between 70 MBps and 110 MBps. In contrast, the Porsche Design Mobile drive (of the same capacity) had frequent dips to around 20 MBps. The peaks were higher at 130 MBps. Despite the higher peaks, the LaCie Porsche Design Mobile took more time compared to the WD My Passport for recording the system image. 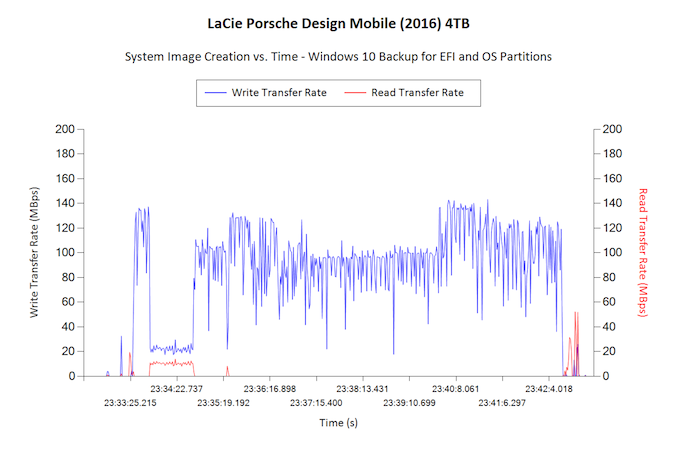 Graphs for the same scenario involving the Backup Plus Slim and Backup Plus portable show that the SMR issue is still exposed. However, the valleys are spread much farther apart compared to the LaCie Porsche Design Mobile from a couple of years back. 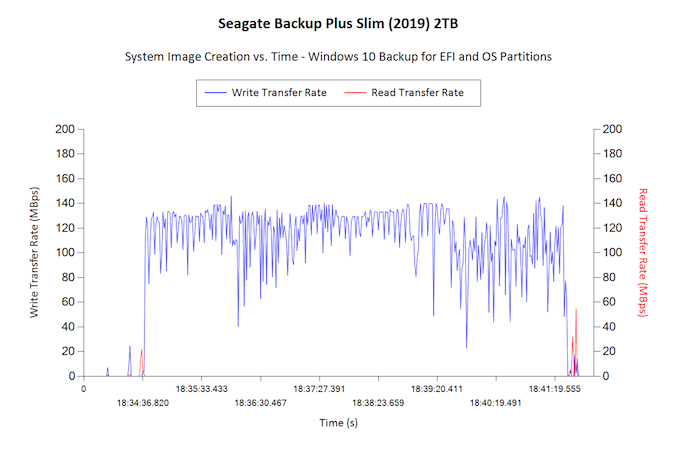 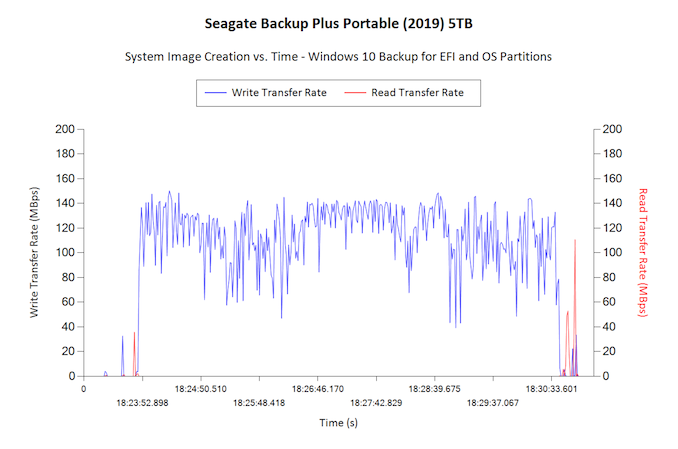 SMR drives do show higher peak performance numbers compared to CMR drives with the same capacity. However, the lack of performance consistency means that a CMR drive is a more predicable medium for typical consumer workloads in the long run.