System performance of the Pixel 3a XL is an interesting topic given its mid-range SoC. Here as aforementioned in the introduction, the CPU power of the SoC should match up with that of the Snapdragon 835 from 2 years ago. The Snapdragon 670 in the Pixel 3a has two Cortex A75 derived CPU cores running at 2.0GHz, while the Snapdragon 835 had four Cortex-A73 derived cores at 2.45GHz. In general, the 22% clock frequency disadvantage should be compensated by the ~25% higher IPC of the newer core microarchitecture. It should be noted that the Snapdragon 670’s CPU cores aren’t expected to perform quite as high in IPC as the Snapdragon 845’s as it employs smaller cache configurations to reduce die size and cost. Thus it should be pretty much a toss-up between the S670 and the S835. 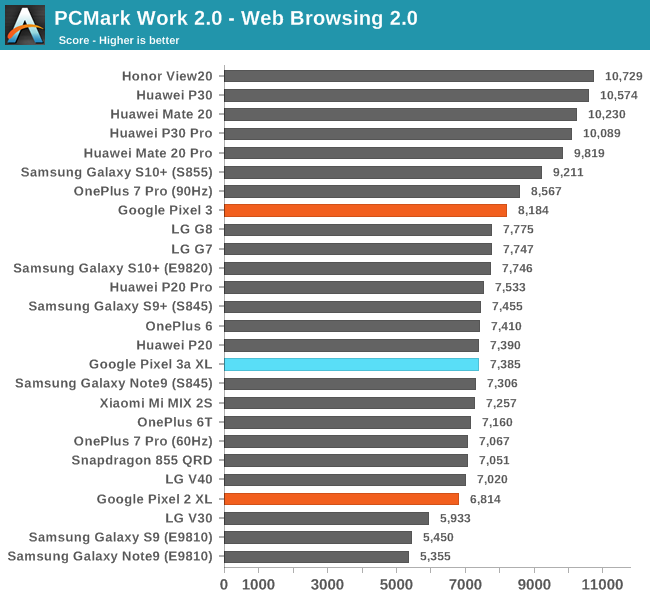 Starting off with the web-browsing workload in PCMark, the newer Pixel 3a does manage to stay ahead of the Pixel 2 XL, while as expected lagging behind the 2018 and newer devices. 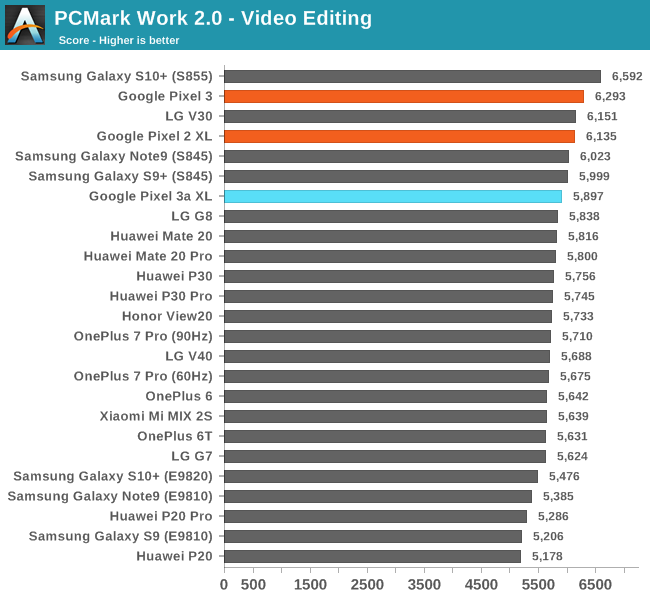 The video editing workloads has hardly any significant performance differences on devices of the last few years, and the Pixel 3a performs well here although it’s to be expected. 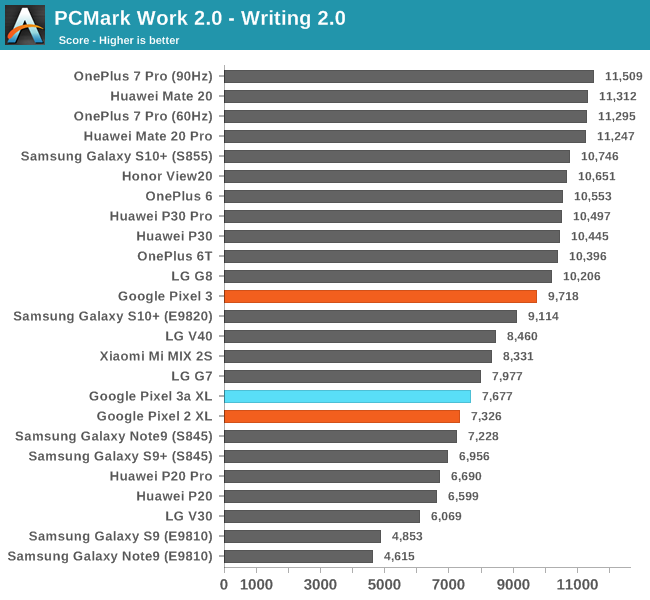 The Writing 2.0 sub-test is the most important of PCMark. The Pixel 3a still manages to hold up well with some Snapdragon 835 devices and even some S845 phones such as the Galaxy S9 and Note9. 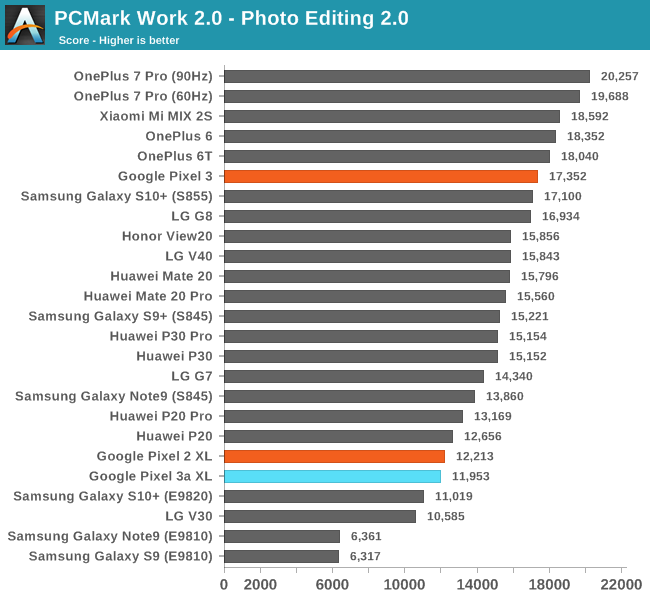 The photo editing score is competitive, again in line with the Snapdragon 835 generation. 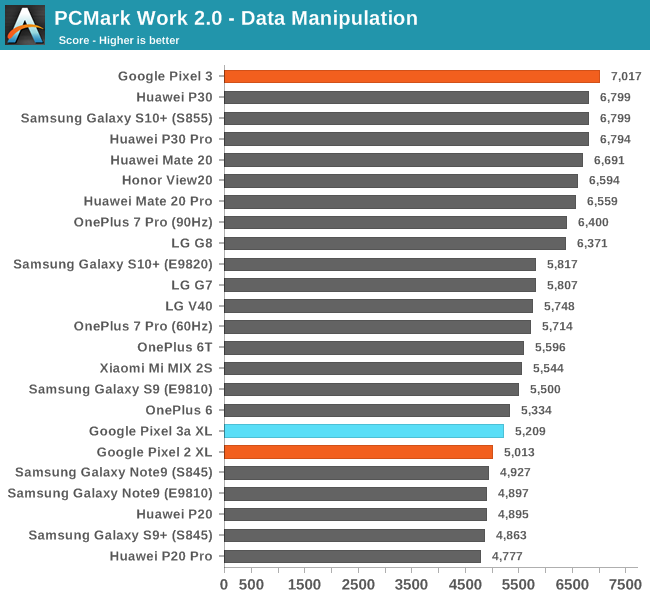 The data manipulation framerate performance is in line with the Pixel 2 XL. 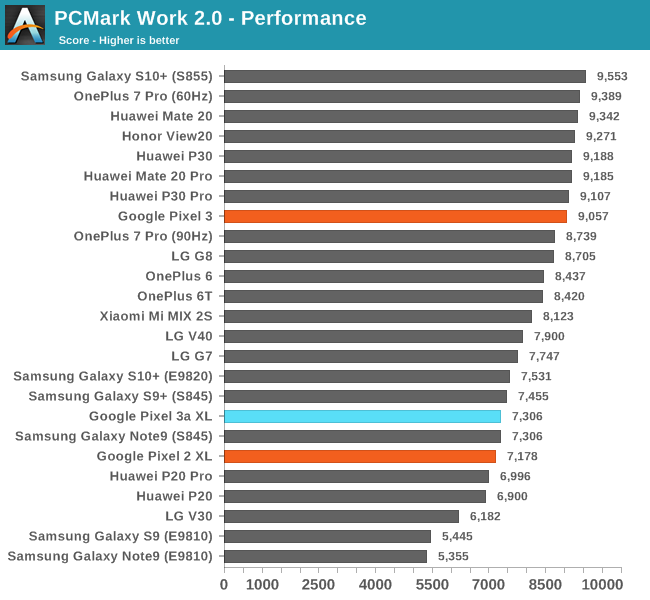 Overall in PCMark, the Pixel 3a performed surprisingly well. It was able to keep up with the Pixel 2 XL whilst even competing some of the worse Snapdragon 845 flagships from last year. There’s still evidently quite a larger gap to the more recent Pixel 3, but again that’s to be expected. 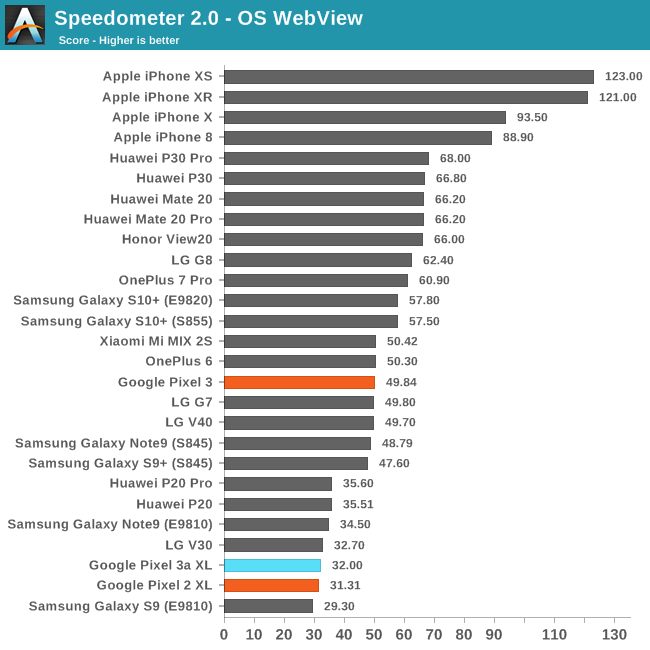 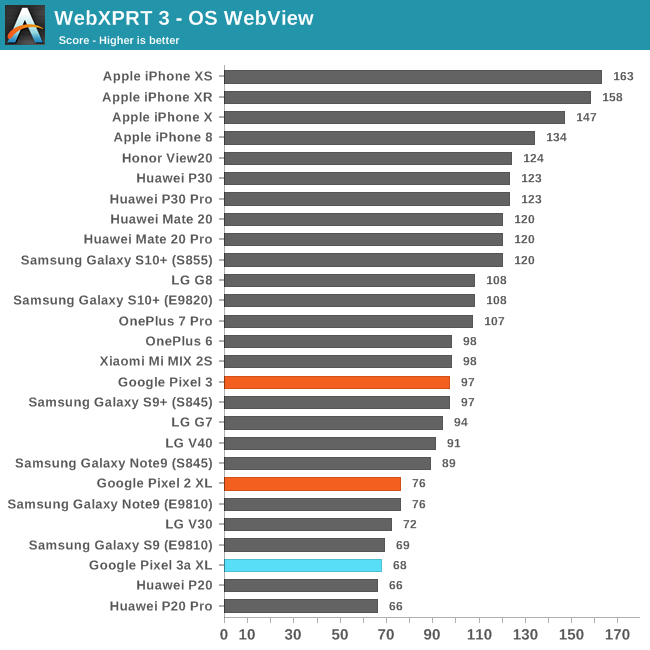 The web-browsing JS tests is where we’ll see more major differences to the Snapdragon 845 and newer devices, again, whilst the Snapdragon 670 performs well against the 835, it does have a significant lag behind newer generation SoCs.

Overall I was very satisfied with the performance of the Pixel 3a XL. It was extremely snappy in everyday usage, and if all you do on a smartphone is social media-like activity, then you’d be hard to press to find any differences between the 3a and other flagship devices.

Where the Pixel 3a more notably fell behind in was web browsing and loading of heavier pages. Here it was evident that there is indeed quite a generational performance gap and the mid-range SoC isn’t quite able to give the same experience.

One thing to note and again we can’t accurately measure with existing tools is the storage performance of the eMMC module of the phone. I did notice quite significantly slower installation speeds compared to newer phones. It’s not a total deal-breaker as some eMMC implementations of years past, but again it’s a compromise Google had to make to reduce the costs of the phone.

Overall, system and application performance of the Pixel 3a XL is very good for a mid-range device.