The MSI Prestige X570 Creation is designed with content creators and enthusiasts in mind with similar aesthetics to its HEDT counterpart, the MSI X399 Creation, and implements them onto an E-ATX sized consumer desktop model. On the rear panel cover is a funky RGB enabled design, with the creation logo being the centrepiece. This covers the large power delivery heatsink which features an extended design from around the MOSFETs, down the side of the memory slots and into the chipset heatsink. The X570 chipset heatsink also includes a cooling fan, while the two M.2 heatsinks are moulded into the board's design. 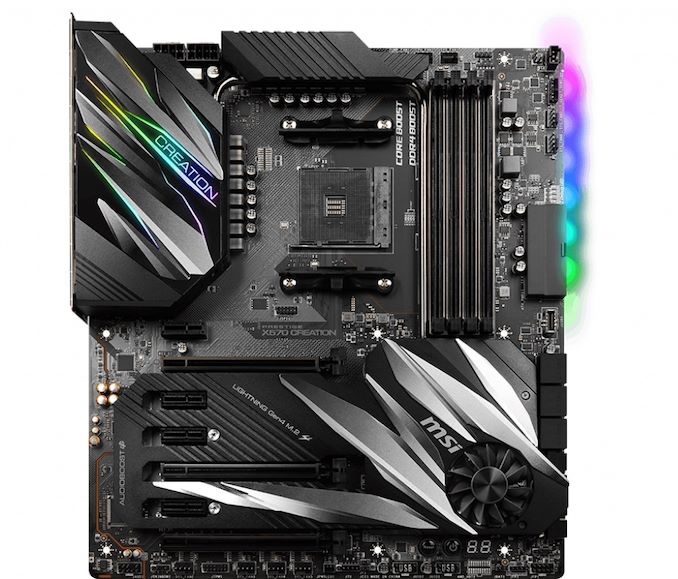 Across the PCI area is a PCB cover which gives the X570 Creation a premium look as it also blends into the aesthetic of the chipset heatsink. Included is three full-length PCIe 4.0 slots which run at x16, x8/x8, and x8/x8/x4 as well as four PCIe 4.0 x1 slots. This means that the X570 Creation supports up to three-way AMD CrossFire, and two-way NVIDIA SLI multi-graphics card configurations. The MSI Prestige X570 Creation is using a 14+2 power delivery with two 8-pin 12 V ATX CPU power inputs, and a single 24-pin 12 V ATX motherboard power input designed to power the board. Storage options include two PCIe 4.0 x4 M.2 slots, with six SATA ports. In the top-right hand corner are four memory slots with support for DDR4-4600, and up to 128 GB.

MSI's Prestige X570 Creation has one of the most impressive rear panels for USB 3.1 Gen2 connectivity. The X570 Creation has eleven USB 3.1 Gen2 Type-A, and a single USB 3.1 Gen2 Type-C port. There's also two USB 2.0 ports and a PS/2 combo port. Also included are two Ethernet ports with one controlled by a 10 GbE Aquantia AQC107 NIC, with the other being controlled by an Intel I211-AT Gigabit NIC; also featured is an Intel AX200 Wi-Fi 6 wireless interface. The board's onboard audio is handled by a Realtek ALC1220 HD audio codec which gives users five 3.5 mm audio jacks and a S/PDIF optical output on the rear panel.

The MSI Prestige X570 Creation represents more elegant range directed towards content creators and professional users. Although this model is the only E-ATX sized offering from MSI at present on X570, the rear panel includes the most impressive selection of USB 3.1 G2 Type-A ports of any model on the chipset with a total of twelve; eleven Type-A and one Type-C. This coupled with a 14+2 phase power delivery, support for DDR4-4533, and an MSRP of $499, this could be the most attractive of all the higher-end X570 models at launch.