How much do you all remember about Tejas (and Jayhawk, Tulsa)? What was to be the fourth generation NetBurst CPU line was originally canceled in favor of dual core 90nm processors. Although we can't comment on the fate of Tejas, we can comment on its replacement.

With Intel's latest roadmap, the thought on everyone's mind is "DUAL CORE PENTIUMS WOW!" - and believe me, it takes a lot to get the boss excited. Indeed, it looks like that magic "Tejas" core that disappeared off the face of the earth has resurfaced as a dual core "Smithfield." From what we can tell from the roadmap, Smithfield will show up in Mid 2005 with three desktop SKUs. Remember, AMD's dual core Toledo Opteron will debut as server chips. Both AMD and Intel's chips are scheduled to be 90nm processor cores. 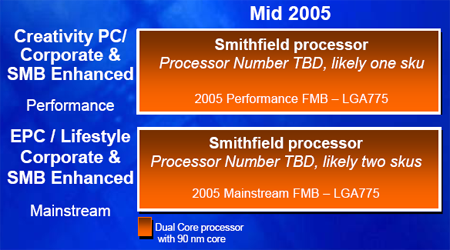 Intel's dual core approach looks extremely promising as they anticipate launching directly on the desktop with the Glenwood and Lakeport platforms. According to the roadmap, Intel states that two of the Smithfields will launch as mainstream processors, while an additional processor SKU will be positioned as a performance processor. All three processors will launch on the LGA775 socket. Unfortunately, details are still light at this time. As to whether or not the much rumored Tejas New Instructions (TNI) shall show up in Smithfield will remain something we cannot confirm or deny just yet.

There has been a significant amount of speculation that these Smithfield processors will offshoot from the Pentium M or Pentium 4 processor lines. Since Alderwood and Grantsdale (925X and 915) support both cores, we cannot assume that Smithfield is a NetBurst CPU.

We have more Intel roadmap news coming up, as well as massive revisions on our CPU processor core cheatsheet, so keep up for the next few weeks!