Samsung promises significant video recording improvements for the Galaxy S10+ with help of the newly introduced HDR10+ mode as well as a new new significantly enhanced electronic image stabilisation. Recording on the new wide-angle lens should also be a new experience for Samsung users. On the HDR10+ side of things, this should not only be the first smartphone to be able to record in the new format, but if I’m not mistaken the S10 should also be the first easily obtainable consumer electronics equipment supporting the technology.

HDR10+ is a Samsung creation first introduced in their TV line-up, and is meant to compete with the Dolby Vision HDR standard. The key differentiating feature for both standards is the inclusion of dynamic metadata into the video stream. HDR10 non plus only supports static metadata, meaning the brightness boundaries in the video encoding mastering remains static. On the Galaxy S10+, when in HDR10+ mode video recording, the phone masters the display luminance from 0.005cd/m² to 1000cd/m² - but again this is just what the metadata first shows as this range will vary throughout the video.

One other important aspect of the ability to record in HDR isn’t just the increased luminance range of your video, but also the fact that the phone is recording in a wide gamut format. Although the format dictates BT.2020, the phone doesn’t master in this gamut as the display isn’t calibrated for it. Instead, HDR10+ is mastered for Display P3 as the wide-gamut recording format of the Galaxy S10. Encoding of the video is fixed to HEVC with 10bit encoding and a L5.1 Main profile.  The audio encoding is stereo 256kbps AAC LC at 48KHz.

One big aspect of recording in HDR10+ is that there’s some inherent limitations that come into play; such as not having access to the telephoto module. To sum up the different video recording modes:

Another limited mode is the 60fps recording: Here you do not have access to EIS nor to any of the additional camera sensors besides the main unit. 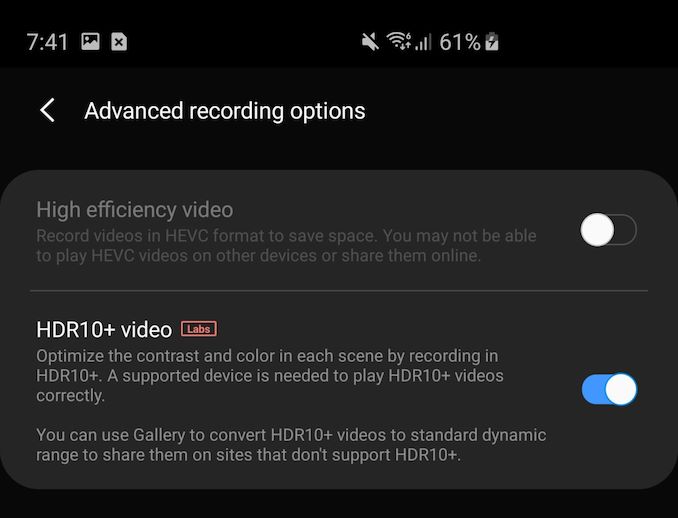 There's one feature that Samsung advertises in the Camera app in the HDR10+ setting, namely saying that one can use the Gallery app to convert HDR10+ videos into standard dynamic range videos for sharing on sites that don’t support HDR. I’ve seen quite a few publications struggle to find this setting, and the reality of the situation is that it’s currently simply not available on the Snapdragon version of the phone. On the Exynos variant, this does shows up in the Gallery settings, and the converting functionality is only available from the video preview screen's share function within the Gallery app, and specifically only this one share function as sharing through the thumbnail view or the actual video play does not trigger the conversion.

We’ve uploaded the videos directly to YouTube, however it becomes evident that YouTube has trouble in terms of correctly recognising the format and correctly re-encoding it for the platform – both for HDR playback as well as converting it to SDR video.

On the device itself, the video looks flawless, but viewing it anywhere else will result in issues. Actually, there’s issues even viewing the YouTube videos on the S10 itself. 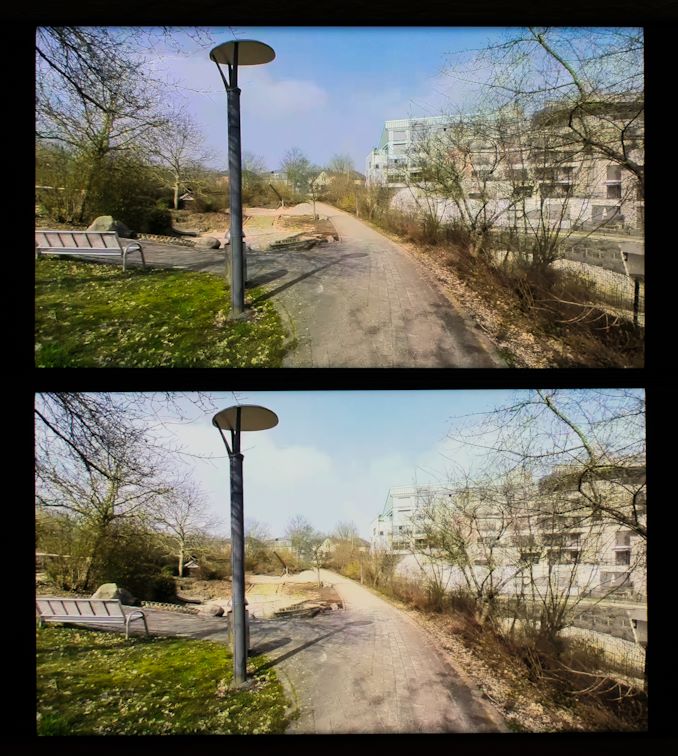 The above is a camera shot of both Galaxy S10’s playing back the same YouTube video. Both units reported as being in HDR and both seemingly were playing the same VP9 stream. However the Snapdragon unit’s rendering was evidently not correct and brightness was off. Playing the video as recorded on the Exynos unit on the native video player on the Snapdragon resulted in identical playback between both devices, and since YouTube’s VP9 encoding seems relatively ok on the Exynos, so this might be an issue with HDR decoding VP9 on the Snapdragon phone.

However the issues with the format don’t end there. Using Samsung’s own Gallery app conversion to SDR results in something akin to a bad joke. The video is mastered in far too low brightness and the whole thing is just flat. We attempted a quick offline re-encode with FFMPEG, and while the result was still bad, it was at least better than what the Gallery app achieved.

Currently unless the HDR10+ isn’t natively played back on a HDR10+ device, the format just isn’t compatible with anything else. Every YouTube video recording, even in HDR, is going to be off, and every SDR conversion, unless more professionally done, is also going to be way off.

So for the time being, unless you want to keep your videos on-device, I would recommend not using HDR10+ on the Galaxy S10 and sticking to SDR video. This is actually a big pity as the mode does vastly improve recorded dynamic range and the increased gamut is also very welcome. I wish Samsung had opted to go the Apple route of recording high dynamic range video yet storing it in SDR format; the iPhones currently beat the SDR result of the Galaxy S10 in this regard.

As for video recording quality itself: It’s good. As with other phones, recording with the wide-angle module is a joy. It’s to be noted because the module doesn’t have OIS you do have to have EIS on for this mode otherwise it results in very shaky video, however because the module is such a wide angle, the cut-off margins due to EIS aren’t as problematic. Video detail is good in all modes, and the EIS doesn’t seem to result in noticeable losses. Transitioning between modules when zooming in and out is good and with minimal delay. Audio recording quality is incredibly good and clear, Samsung has been strong in this regard for a long time.

Overall, the Galaxy S10’s main advertised video recording feature is a gigantic double-edged sword. The video quality in it is fantastic, however you will have a very hard time sharing your videos with anybody as the ecosystem just isn’t ready.

The speakers of the Galaxy S10 were a big surprise for me as the company hadn’t really mentioned the improvements. With the new screen design, Samsung has also seemingly completely redesigned the earpiece speaker on the S10. In fact, it serves as a full-blown stereo speaker which is of significant higher quality than what we’ve seen on the S9. 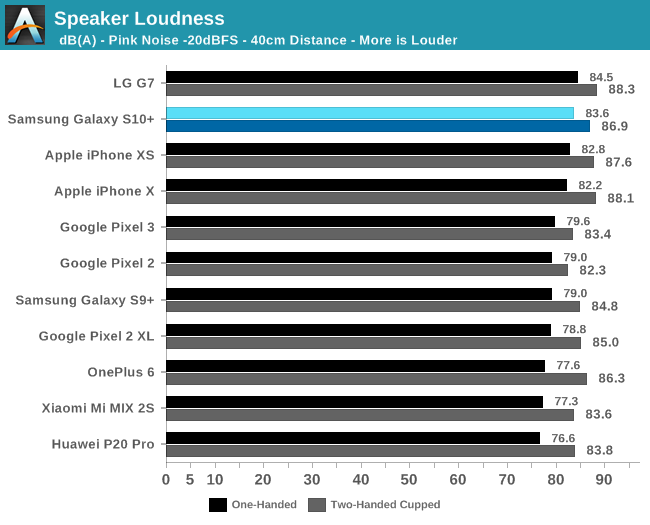 Looking at our speaker loudness tests, we see the Galaxy S10+ perform significantly better than the S9+. What is important to note here in the results is the very small difference in loudness between holding the phone one-handed in portrait mode versus holding it two-handed with cupped palms. The only other phones who had such small deltas were the Pixel 2 and Pixel 3’s front-facing speakers, however the Galaxy S10 goes a lot louder than both of these, without distortions if I might add. Currently the Galaxy S10 is the phone with the best frontal directionality in audio playback, something I did not expect. 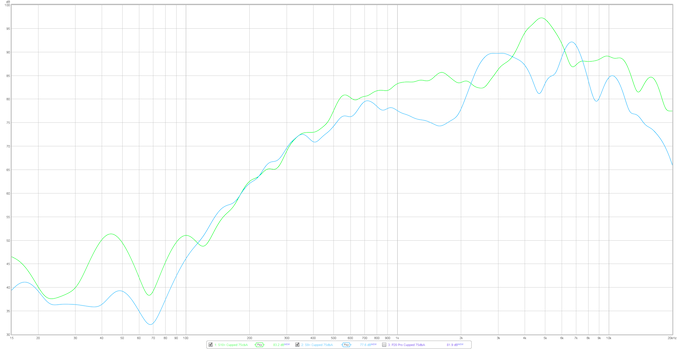 Looking at the frequency response of the Galaxy S10, we see that Samsung not only makes the speakers loud, but they’re also of very high quality. The S10+ has notably improved the bass, upper-mid-ranges as well as treble versus the Galaxy S9+.

In fact the new upgrades on the S10 now put the phone comfortably ahead of any other smartphones in the market in terms of speaker quality, it’s just that much better.

The one thing I would critique Samsung on is the new volume control steps. The audio is now so loud and clear, that sometimes at night I want to have it set quieter, but the issue is that the new volume controls in OneUI have a lot less discrete steps, with less finer button-pressed levels than in previous generations, requiring one to fiddle with the volume slider to get to a certain volume. This is also valid for headphone playback.

Speaking of headphone playback, one thing I wanted to do late last year was reintroduce audio jack playback quality evaluation. This was something that was triggered by the loss of headphone jacks by many vendors who replaced them by low-quality 3.5mm dongles with bad audio quality. Only Apple unfortunately managed to deliver a sensible dongle with good audio quality.

During this testing I noticed that another difference between the Snapdragon and Exynos units is the audio quality of the DAC. The Exynos units have this reputation of being the ones with the high quality audio playback quality, but this is mostly just reputation based on these variants having Wolfon/Cirrus Logic audio chips, and not actual measurements.

Publishing audio measurements is like opening up Pandora’s box in terms of what I’m getting myself into, as very many people get it wrong. In many cases what you’re measuring isn’t actually the audio playback the audio device, but rather the input characteristics of your measurement hardware. Another popular mobile review site has as such been hitting the limits of their audio interface for several years now, with the resulting numbers not actually showcasing much of the capability of the devices at hand anymore.

As such, even my own figures here will be hitting the limits of my own measurement hardware, but if we keep in mind that these are not definitive measurements of the devices, then we can have a more balanced view. In particular for the Galaxy S10, these are very indicative of what you’re to expect as a difference between the two units. 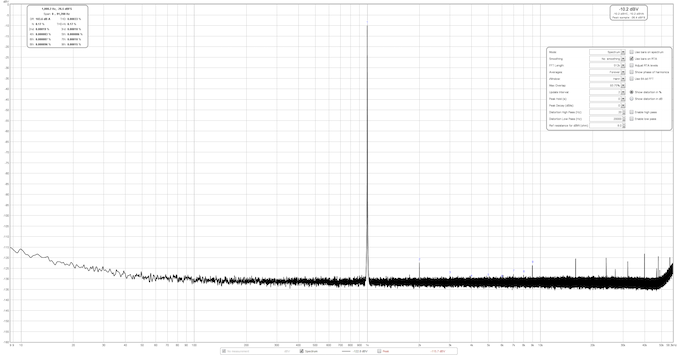 The Snapdragon Galaxy S10 continues to showcase excellent results with what was in line with Qualcomm’s Aqstic line of DACs over the last few years: a very clean output with very little noise. 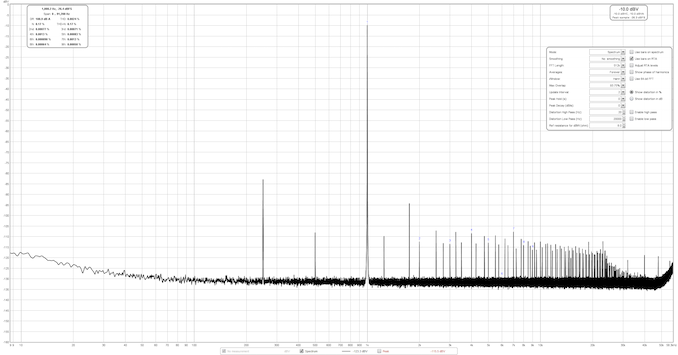 Switching over to the Exynos Galaxy S10 however we’re seeing some pretty shocking results. The phone uses a Cirrus Logic CS47L93 audio codec chip which has actually been used in Exynos variants since the Galaxy S8. Unfortunately in recent years this was surpassed by Qualcomm’s audio chips, and in particular the Galaxy S10 suffers from a pretty bad implementation. Here we’re clearly seeing noise components that are not part of the reference 1KHz signal, with a particularly odd 250Hz component. The measurements were done in sequence with just re-plugging the input from the Snapdragon to the Exynos under the same conditions. Audio output level was calibrated at near -10dbV / 312.5mV RMS on both devices.

In practical terms, there is audible difference between the two as the Exynos unit sounds warmer (in a bad way) and more muffled. The Snapdragon achieves higher clarity and the sound stage appears wider. This was my subjective evaluation using the same Samsung’s included AKG headphones on both units, both having the same software audio settings.

I applaud Samsung for still including the 3.5mm headphone jack on the Galaxy S10 – however a big part of the world will unfortunately experience lesser audio quality on their model variants.