Since the first reports of Intel's overclock lock, the web has been buzzing with speculation about what Intel did and how to fix the lock. There has been so much misinformation, partial truths, and downright confusion regarding the lock that it's time to set the record straight.

Asus and Abit have been most successful so far in finding ways around the lock, so we spent some time with both companies to determine what they have found and how they are bypassing the lock. How do we measure success? It is simply a matter of performance. Abit has managed to produce a 925X that is capable of a 258 CPU Frequency. 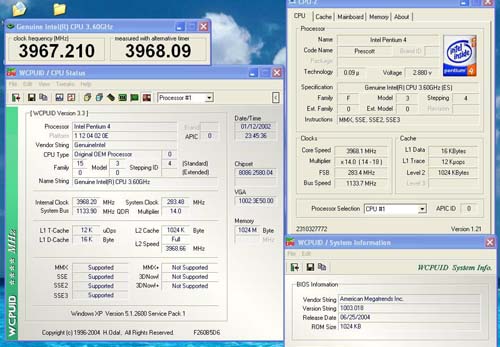 
Asus has enjoyed even more spectacular success. With their latest BIOS revision 1.04 and higher, Asus is now reaching our CPU limit of 278-283 CPU frequency. This is confirmed with a SATA hard drive and PCIe video card, since you will see there is much more to the story than Northbridge voltage.

Yes, Virginia, There IS an Overclocking Lock

The overclock lock is very real on the Intel 925X/915 chipset. Sources close to Intel have confirmed that the 925X/915 chipset was designed with a 10% overclock limit as a design parameter. This is not a simple lock loop, but involves several components according to Engineers at Asus and Abit: