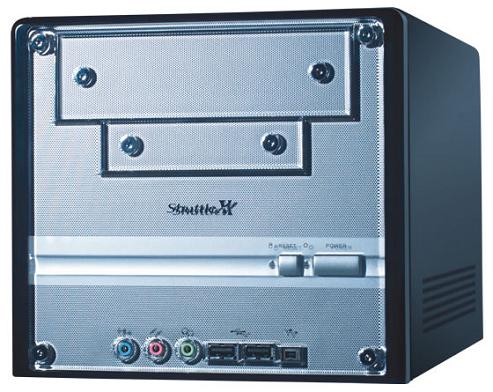 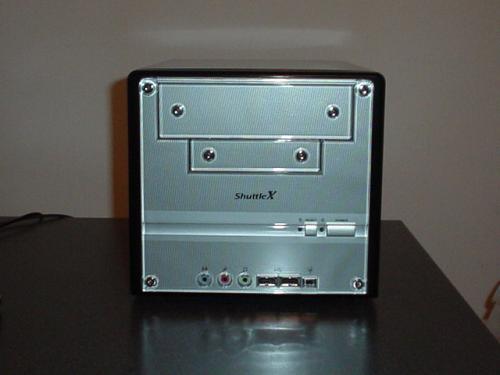 The front panel of the Shuttle SK83G consists of your standard array of I/O ports; it includes two USB 2.0 ports, audio ports (Mic In, Line In, Line out) and a microphone jack. For some reason, Shuttle continues to ignore their optical drive bay(s) by not building a matching plate into the face of the SK83G, which would stop beige optical drives from clashing with the black and grey colors of this SFF. I suppose you could always buy a black optical drive, and that's a fine choice, but many manufacturers have already constructed their SFFs with built-in face plates, so we're not sure what's holding up Shuttle. 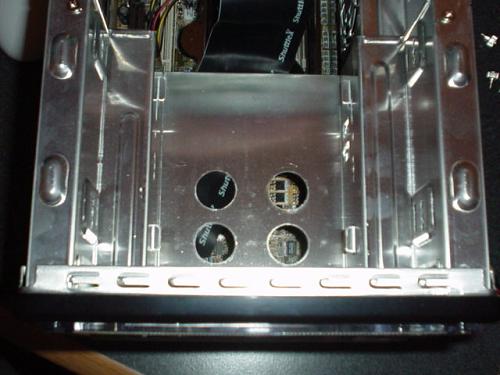 The SK83G is only able to store one optical (ATAPI) drive, one floppy drive, and one hard drive at a time. Or, you could opt to install two hard drives and one optical drive if you have no use for a floppy drive, and vice versa. Regardless of the combination, you're not going to be able to install more than three drives total due to the SK83G's small dimensions. This isn't terribly inconvenient, but other manufacturers have found a way to avoid this restriction by building slightly larger SFFs without getting too big. We hope that Shuttle can move toward slightly larger SFFs so as to create another drive bay with their future models. Anyway, routing cables to their destinations from the optical, floppy and hard drives that we installed was a cinch using the bundled rounded cables, even though we would have liked the Floppy cable to have been rounded too. All in all, the way the SK83G's internals were organized allowed us to move through areas seamlessly, and space in general wasn't too cramped or tight by SFF standards.


Shuttle, like most SFF manufacturers, uses special heatpipe cooling to dissipate the heat coming from the Athlon 64 3200+ processor that we used for testing. With the SK83G, Shuttle has improved upon their previous "ICE" heatsink by adding a heavier and generally thicker copper base, and slightly thicker aluminum fins as well. The ICE now also has a new Everflow cooling fan, which can be manipulated in the BIOS through the PC Health section's CPU Fan Speed Control option. 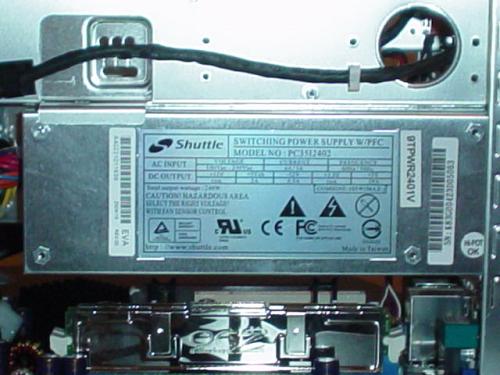 The SK83G's PSU is a 240W version of Shuttle's recently introduced series of "SilentX" products. Basically, what you're getting here is the more silent and cooler version of Shuttle's first iteration of their Athlon 64 SFF, the SN85G4 (version 1). The original SN85G4's PSU ran very hot and was quite loud, which of course didn't sit well with the enthusiast community. Luckily, that was completely fixed with the SN85G4V2 and is not an issue in the SK83G. Anyway, 240W won't be enough to support high end, next generation video cards, but it will be able to support power hungry hard drives (yes, even SCSI) and processors. Just make sure you understand that with a system like this, you probably aren't going to be doing much overclocking at outrageous levels.

Like most good SFFs these days, the Shuttle SK83G left enough room for high end video cards such as the Radeon 9800 Pro or GeForce FX 5900 Ultra. We were, therefore, able to fit a standard 128MB 9800 Pro inside the SK83G quite easily. Even though both ATI and NVIDIA's high end cards are still primarily 9800 Pro cards or 5900 Ultra cards, their next generation cards are just starting to reach retail in quantity. ATI's X800 and their various iterations have been on the market for several weeks in low quantity, and we were able to test one out successfully inside the SK83G. Just as with the 9800 Pro, the X800 was easy to install and didn't really take up any space that would interfere with other components in the SK83G. Unfortunately, since GeForce 6800 cards aren't available in retail (or are only barely trickling in), and because we couldn't get the few samples that are available at the moment, we were unable to confirm whether or not a GeForce 6800 of any kind would fit in the Shuttle SK83G's AGP slot. Obviously, we realize that a GeForce 6800 Ultra won't fit due to its two-slot design, assuming manufacturers follow reference design. But a slimmed down version of the GeForce 6800 Ultra, like a GeForce 6800GT, should fit. UPDATE: After weeks of waiting, we were finally able to test out a GeForce 6800 series card to see if it could fit and operate in an SFF system. We tested a PNY GeForce 6800GT (taken from a local Best Buy) inside the Shuttle SK83G, and experienced no issues with installation or operation. It was a tight fit, but it worked, and the PSU was able to handle a Windows XP install and multiple gaming apps. 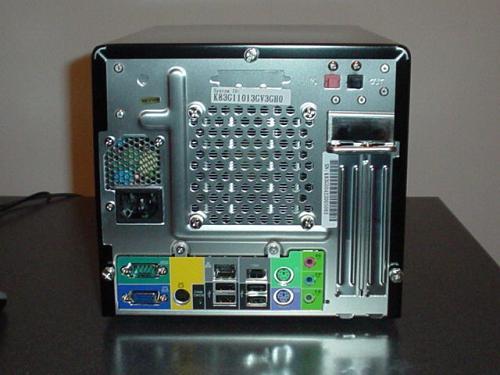 The SK83G also includes a good collection of I/O ports in its back panel. Specifically, there are four USB 2.0 ports, one IEEE1394 FireWire port, one S-video and VGA port, three audio ports (Mic in, Line in, Line out), two PS/2 ports, and a serial port. The IEEE 1394 port is a nice touch and is necessary for users who demand high throughput for large files, such as digital camera users. Four rear USB 2.0 ports are fairly standard nowadays, so that's nothing new. Everything else is standard but the VGA output, which is, of course, an excellent addition to an SFF for enthusiasts looking for reliable backup video in case their AGP card dies. While UniChrome II video is nowhere near acceptable for 3D gaming, it is an adequate 2D accelerator. 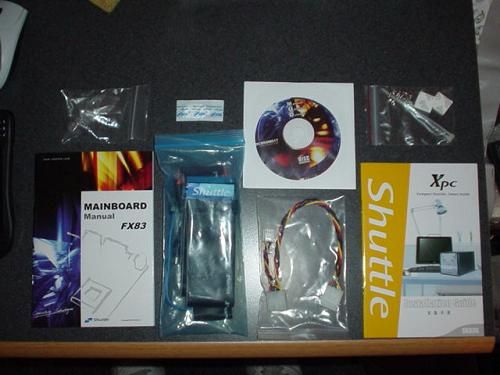 Shuttle's bundle is primarily made up of your standard set of cables, screws, floppy, etc. There is one SATA cable, one IDE cable, one Floppy cable, a 4-pin male/female power connector, an S-video connector, a motherboard driver CD, and heatsink compound bundled with the SK83G. The IDE cable that is bundled with this SFF isn't a rounded cable unfortunately. Rounded cables in an SFF can be exceedingly useful because they make it much easier to route and organize cables within a system as cramped as an SFF. Unfortunately, we didn't get a rounded IDE or Floppy cable with this bundle. But in the end, it's a minor drawback.