Flying out to Taipei, the AnandTech team was expecting the BTX form factor to be the center of attention at Computex. Judging from the lack of BTX boards, we found this to be far from true. The only manufacturer who displayed a decent sized line of BTX boards was, not surprisingly, Intel. In turn, only a few manufacturers came to the show with their BTX style cases.

Besides cases, many booths showed off other pieces of hardware from traditional power supplies to fan-less cooling equipment. Some of these manufacturers included Thermaltake, showing off its new fan-less power supplies, which made use of copper piping and fins to cool the unit, as well as other cooling hardware. Zalman also brought its line of cooling equipment along with its noise-less monster of a case, the TNN500AF. 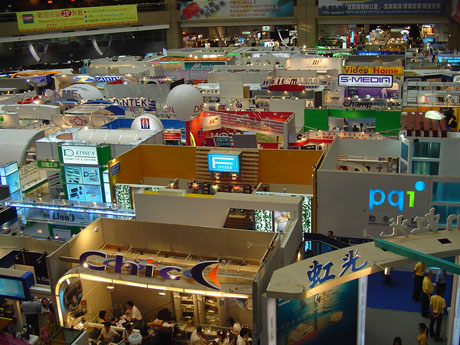 
Other manufacturers, like Enlight and Aopen, brought their renditions of the new BTX format cases, while Lian Li and SilverStone presented us with their BTX look-a-likes.

There were many innovative products at 2004's Computex show in Taipei. We enjoyed our week-long stay there, taking in the sights and sounds. We know that you're all anxious to see what we saw, so without further ado...