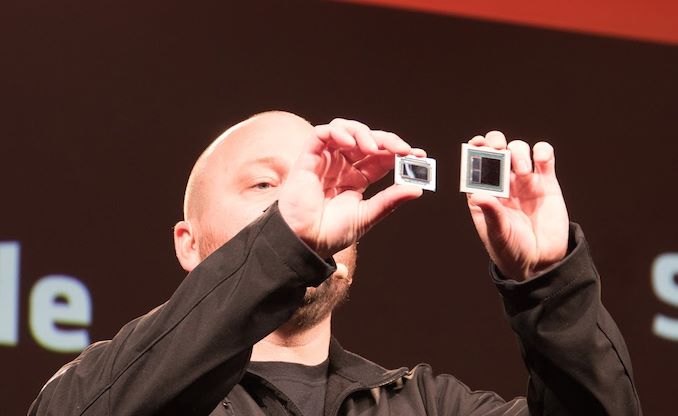 Buried towards the tail-end of today’s MacBook Air press release from Apple was a second announcement: that they’d be releasing a minor MacBook Pro refresh next month. Though curious in and of itself – the MacBook Pros were just updated in July – more interesting is what they’d be refreshed with: new AMD GPUs. Announced by AMD at the same time, we now have confirmation that AMD’s missing mobile GPU is finally shipping. It will be arriving first as the Radeon Pro Vega 20 and Radeon Pro Vega 16, upgradable graphics options for the 15-inch MacBook Pro set to become available next month.

As a bit of background, AMD first announced the Vega Mobile GPU – which we believe is codenamed Vega 12 – at the start of the year at AMD’s CES Tech Day. The company stated the GPU would be coming later this year, and even showed it off. While details were scarce at the time, it was announced that it would be a smaller, lower-power GPU specifically for mobile devices. And of particular note, it would have a z-height of only 1.7mm, the same as AMD’s mobile Polaris 11 GPU, making it suitable for installation in relatively thin laptops.

However between CES and today, AMD has been completely silent about the GPU. Even when I reached out to them I couldn’t get a solid answer, and to be perfectly honest, I had given up on seeing the GPU. Sometimes products hit too many problems, or can’t find interested customers; it happens. With everyone (sans Apple) already having their holiday 2018 products on store shelves, it seemed like AMD had all but missed their launch window, and with it, any real chance of adoption.

Instead, as we now know, it will be making it to commercial products after all as an upgrade option for the 15-inch MacBook Pro. And while the lack of a shipping date for the new models is not especially confidence-inspiring given everything else that has been going on, none the less I have to admit that I was premature in giving up on AMD.

The flip side to this however is that because the first Vega Mobile SKUs are going into Apple products, AMD has limited what they’re saying about the products, as is traditional for Apple suppliers. So while the company is proud to announce the part – they even have a short video showing it off – specific details are a bit thinner. As a result, the following is a mix of details from AMD and some guesses on my part.

Perhaps the most important bit of news here is that the new GPU is definitely an actual Vega GPU. This is no mix-and-match semi-custom GPU like the “Vega M” GPU in Kaby Lake G – which turned out to be Polaris’s graphics core with Vega’s memory controller – but rather it’s a bona fide Vega GPU with all of the features that entails, including Rapid Packed Math. So, if only at long-last, we finally have a second discrete GCN 5 GPU from AMD.

AMD’s announcement and the resulting SKUs also strongly point to this part having a total of 20 CUs (or 1280 SPs). As a mobile part we were already expecting it to be less than half of a Vega 10 (64 CUs), but this is actually smaller than we were expecting. In practice this puts Vega Mobile much closer to Polaris 11 than it does Polaris 10 or Vega 10; in fact even “Vega M” has more CUs. Which again, we’re looking at mobile parts here, so it becomes a matter of what’s viable in terms of chip size and power consumption. But it also means that we shouldn’t expect to see Polaris 10-like performance out of the part, while the performance improvements over Polaris 11 remain to be seen. Apple for their part is touting a “60%” improvement, but they don’t actually specify what they’re comparing the new GPUs to.

Meanwhile AMD was also able to send over clockspeed information for both SKUs. The Pro Vega 20 has an “engine clockspeed” – which I’m interpreting to mean the boost clock given that we’re talking about mobile parts – of 1300MHz. Meanwhile the lower-end Pro Vega 16 tops out at 1185Mhz. The Pro Vega 16 also only features 16 CUs out of 20, so on-paper we’re looking at around 70% of the Pro Vega 20’s theoretical throughput.

Past that, we don’t have any further confirmed information on the GPU itself. Specifically, we don’t know the number of ROPs or the clockspeeds. 32 ROPs is likely since that would be half of a Vega 10, but then “Vega M” included 64 ROPs anyhow. We also don’t have a good estimate on die size at this time, as we don’t have better pictures of the GPU. What we do know however is that the chip is being fabbed on a 14nm FinFET process, which means it’s almost certainly being done by long-time partner GlobalFoundries.

Moving on, feeding the new GPU is a single HBM2 memory stack, which means we’re looking at a 1024-bit wide memory bus. Because these are mobile parts, AMD has clocked them fairly conservatively, with a memory clock of 1.5Gbps. Even then, a single HBM2 stack offers 192GB/sec of memory bandwidth, a more than 70% improvement over the best Polaris 11 product and even more over the various mobile SKUs which Apple uses. So there is far more bandwidth available here to feed the GPU. Meanwhile it’s worth noting that Apple’s SKUs are all using 4GB stacks here, but if AMD wanted to, they should be able to offer 8GB (8-Hi) configurations as well.

Once Apple’s machines do ship, it will be interesting to see what performance is like. The Radeon Pros Apple current uses are no slouches, but they are limited by their relatively small size, not to mention the TDP limits of the notebook itself. Improving performance on the MacBook Pro means not only offering a larger GPU, but also better performance-per-watt than the current GPUs. In the desktop space AMD has struggled mightily here as they’ve aggressively pursued absolute performance, however we’ve never seen what Vega is like in a more conservative configuration. So it will be interesting to see what AMD and Apple can do.

Finally, looking at the broader landscape, I’m curious to see whether Vega Mobile will be adopted anywhere else. AMD is quite late in this generation, and as I’ve mentioned previously they’ve missed the rest of the 2018 laptop updates. However as we still don’t have a good replacement for NVIDIA’s GP106 GPU – the workhorse of many high-end laptops – AMD may not be as late as they seem if they can sign up more laptop manufacturers in the first part of next year.