With all this hype about 16X and 12X burn speeds, where are consumers expected to get the newest media? At this time of publication, we still only have two manufacturers who can reliably produce dual layer media, and only a handful that can reliably produce 8X/12X certified media. During the show, we had a chance to talk to some of Taiwan's larger media manufacturers, including Ritek, Prodisc and CMC Magnetics.

Much to our surprise, all three manufacturers had 16X DVD+R media on display. There seems to be enough expectation that 16X DVD-R media will also follow, although we did not see samples of that particular disc on the show floor. As we saw with the AOpen and BenQ drives, chipset companies like MediaTek and Ricoh are confident enough of 16X DVD-R media support to advertise it in their upcoming chipset specifications. Sanyo and Philips are expected to follow suit. However, as common as 16X media was, dual layer media seemed almost untalked about.

Some manufacturers seemed extremely receptive of BluRay (BD). From all manufacturers to whom we spoke, most seemed to agree that we will see top BluRay devices before 2006. 18 months does not seem very far for a future format that has virtually nothing to show for at this time. Quanta hinted at even earlier devices on their roadmap. BD uses 450nm lasers while DVD uses 650nm. 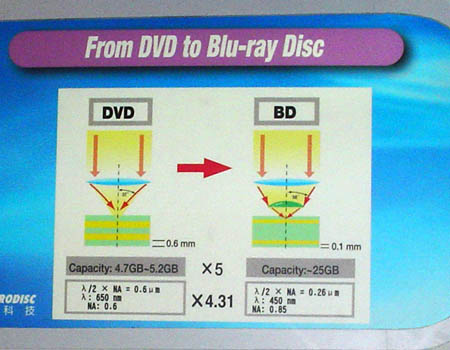 
ProDisc, on the other hand, had a significant amount of material contradicting the advancement of BluRay in favor of HD-DVD. Whether or not some of ProDisc's claims are valid has yet to be decided, but below is a snapshot of how the Taiwanese manufacturer sees the cards fall with regards to future optical formats. 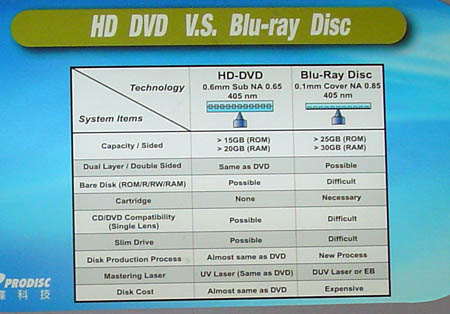 
Although difficult to see, ProDisc had a small display that almost seemed in favor of Near-Field magnification (which is a key component of BD technology). Below, you can see some teasers of 50nm radius pits. The theoretical capacity on such discs is 100GB. 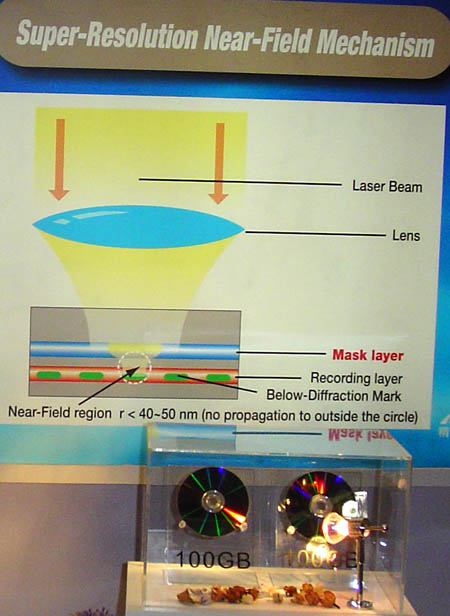