After invitation to the AOpen suite at Computex Taiwan, we had a chance to see the newest 16X dual layer DVD recorders in action; and we were surely not disappointed. Recent AOpen recorders, including the DDW8800, were based on alternative OEM designs and re-branded as AOpen. The newest DDW1608, on the other hand, will use an entirely new design and construction from AOpen. However, most intriguing is the Ricoh chipset inside. You may recall Ricoh's involvement in the first DVD recorder chipsets several years ago when 2.4X DVD+R drives were the norm.

Here is a teaser of AOpen's DDW1608 burning a 16X DVD+R disc. When we actually receive the drive in a few weeks, we will run our typical battery of read, write and error tests. 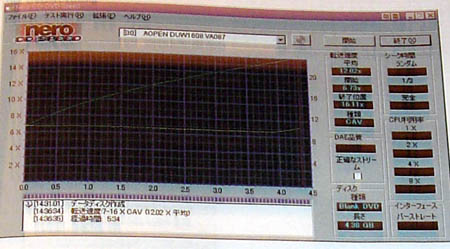 
Below is a screenshot of BenQ's next generation 16X burner writing a disc in under 6 minutes. 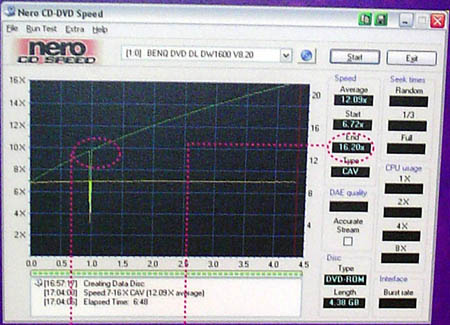 
For an additional teaser, we included a shot of BenQ's entire next generation burner lineup, including 4X DVD+R9 devices.


Other prototype designs were also featured on the show floor, including 16X LiteOn/Gigabyte designs using MediaTek's 16X MT1818E successor. Philips Taiwan also had a Nexperia reference design in a private booth, of which we were able to snag a picture. NuTech/Quanta has been using the Nexperia chipset design for their recent line of dvd recorders. Feel free to check out this document that we also snagged from Philips, which talks about the upcoming Nexperia 725x chipset.