AGP on Intel 9xx chipsets? We explain how.

At Computex we saw something very interesting - both Intel and SiS based motherboards featuring dual graphics slots, AGP and PCI Express x16 to be specific. What makes these dual slot motherboards so interesting is that supposedly on VIA's chipsets actually featured both AGP and PCI Express x16 interfaces. So were Intel and SiS pressured into following in VIA's footsteps? We hit the show floor at Computex to try and find out.

Gigabyte had a board on display when we did our Early Bird Computex coverage that used Intel's 915 chipset and featured both slots, but when we went back to visit their booth the motherboard had mysteriously disappeared. In fact, when we asked Gigabyte about it they denied all knowledge of the board. Curious. 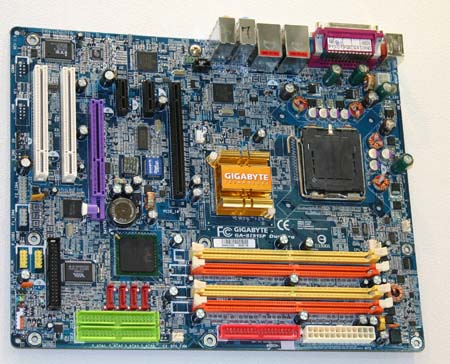 ECS also had a board on display with similar properties, but unlike Gigabyte they were not afraid to show it. They informed all who asked that there was a performance hit when using the AGP slot on their motherboard (between 5 - 20%), but they didn't really explain how it was done. ECS also mentioned that you could populate both AGP and PCI Express x16 slots at the same time, but also, they didn't really explain how it worked.

Further inspection revealed that on both the Gigabyte and ECS boards there were no bridge chips or ASICs that would explain how they acheived adding AGP support to chipsets that supposedly don't support it. So were we just lied to? Does Intel actually support AGP and are they not telling anyone about it? As nice as that would be to believe, it's wrong.

Instead, what the manufacturers have done is gotten a little creative with their AGP interfaces and are actually running the slot off of the PCI bus, stemming from the South Bridge. Remember that the AGP interface is only 32-bits wide, the same width as the PCI bus and you can actually run an AGP card in PCI mode, giving up all of the benefits of AGP obviously. Remember that the PCI bus runs at 33MHz, offering only 133MB/s of bandwidth vs. AGP 8X's 2.1GB/s of bandwidth to the card. The incredible drop in bandwidth explains the performance hit, and although we haven't tested any of these solutions we'd say that running a fast AGP card on the PCI bus is probably not the best idea for performance. It was a valiant effort by these motherboard companies, but if you're interested in a high performance system then this isn't a solution. You'll either have to turn to VIA or bite the bullet and buy a PCI Express x16 card when they're available.

We believe that the SiS board we saw was most likely using a similar technique to achieve both AGP and PCI Express x16 support. This would also explain why the AGP slot on these boards was located far away from the North Bridge, which would normally be a routing/trace length nightmare.