Conclusion: Cheap, But Don't Fill It

Mushkin has been basing its SSDs off Silicon Motion controllers for years, and they have produced a few hits when they have managed to deliver a good-performing SMI platform at great prices. That was clearly the case with the last Mushkin drive we reviewed, the Reactor. The Mushkin Source isn't one of those clear winners. Instead, it's a cheap drive that makes some compromises and comes with some caveats. 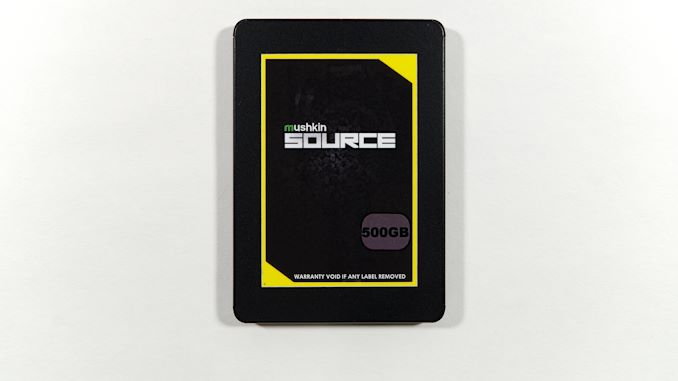 The Mushkin Source provides about what we expect from an entry-level SATA SSD. The choice of a DRAMless SSD controller means that random I/O performance lags well behind mainstream SATA SSDs, but sequential I/O performance is for the most part competitive. The lack of DRAM lowers power consumption a bit, so for sequential workloads where the Source performs well, the power efficiency tends to be better than most mainstream SATA SSDs, but the power savings aren't enough to match the much lower performance on workloads with random I/O.

Like any other consumer SSD using TLC NAND, the SLC write caching used by the Mushkin Source is an important part of the overall performance profile. Without it, write performance would be unacceptable, but the cache on the 500GB Source we tested is adequately sized to handle most of our tests and most real-world consumer workloads. For the few tests that wrote enough data to overflow the SLC cache, the effects can be seen as substantially lowered write performance and worse read performance as the controller is too busy shuffling data around. The worst-case performance of the Mushkin Source is just as bad as other DRAMless SSDs we've tested, which is a bit of a disappointment given how mainstream SATA and NVMe SSDs have shown Micron's 64L 3D TLC to be significantly faster than their first generation 3D NAND. The Mushkin Source doesn't offer the kind of generational improvement we wanted to see over older DRAMless drives like the HP S700.

For lighter consumer workloads that don't routinely throw around multi-GB datasets, the DRAMless design of the Mushkin Source is a minor hindrance, not a crippling flaw. It's slower than mainstream SATA SSDs, but still far faster than a hard drive for both random and sequential I/O. When subjected to a more intense workload, the Source can offer adequate performance for a while before the SLC cache runs out and latency goes through the roof. Given its entry-level positioning, the Source is quite capable of handling the kind of workloads it can be reasonably expected to encounter.

Black Friday and Cyber Monday sales are just days away (and in some cases, already underway), but there's a chance that this may not actually be the best week out of this year to buy a new SSD. NAND flash memory prices have been falling fast in recent months and that trend is set to continue well into 2019. A record-low price per GB this week could be the everyday going rate in a few weeks or months. In addition to this volatility, it appears that the sales are causing major online retailers to run out of stock of some of the SSDs they are offering the best deals on. So any assessment of the current market conditions and the pricing on the Mushkin Source will have a short shelf life.

But as things stand now, the Mushkin Source doesn't stack up very well against the best prices for mainstream SATA SSDs. The clearest niche for drives like the Source is at the 120GB capacity point that the mainstream drives have abandoned. At larger capacities, the Source is either more expensive than something like a Samsung 860 EVO, or jumping up to an 860 EVO or MX500 is only a few well-justified dollars more. Unless price per GB is the ultimate goal at the 500GB, then the Source is difficult to recommend. The annoying thing is, the performance when full means that users get the best when they do not fill it, so if the 'useable capacity' is reduced in this way, then price per GB goes up. That's when the MX500 comes into play at 500GB, or the 860 EVO at 1TB.

The Future Value is in QLC

Looking forward, DRAMless SATA drives like the Mushkin Source will be competing against the coming wave of QLC SATA SSDs. Many of these should be able to include DRAM caches and still offer lower prices per GB than DRAMless TLC SSDs. At high capacities (1TB+), QLC SATA drives will probably destroy the market for DRAMless TLC SATA SSDs. At smaller capacities, QLC drives will suffer even more severely from the performance limitations of only having a few NAND flash dies to use in parallel, and may not be able to beat a DRAMless TLC drive.