Professional users looking to purchase an ASUS Z390 board without much of the cost-upping controllers and aesthetics will probably be looking towards the Prime series. The Prime series offers an entry-level jump onto the chipset with bare minimum features, but like the rest of the Z390 chipset, they still support overclocking through the Z390 chipset and look to offer better value overall than the far-reaching gaming targeted boards.

Starting with the premier entry-level Prime range, the ASUS Prime Z390-A is an ATX sized motherboard and features a white, silver and black design throughout. The board has a white rear panel cover and chipset heatsink, with integrated RGB on both with support for ASUS AURA Sync. The PCB has a white patterning which contrasts quite nicely and represents one of the more subtle looking ASUS Z390 options. The Prime Z390-A has three full-length PCIe 3.0 slots with two getting treated to ASUS Safe slot armor protection and the slots operate at x16, x8 and x4 from top to bottom. This means the Prime Z390-A officially supports two-way SLI and up to three-way CrossFire multi-graphics card configurations. 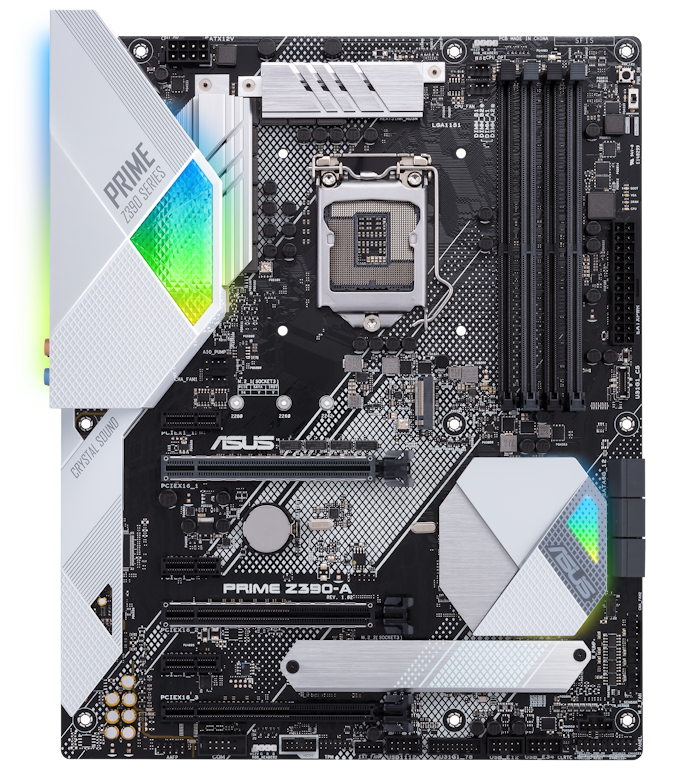 Memory capability comes from four RAM slots with support for DDR4-4266 and a maximum capacity of up to 64 GB. The storage solutions offered on the Prime Z390-A include two PCIe 3.0 x4 M.2 slots, with only one of them offering support for SATA drives; this seems to be a regular occurrence on the ASUS Z390 line-up. Also included are six SATA ports with the ability to operate RAID 0, 1, 5 or 10 arrays.

This top Prime Z390 model has a total of seven USB ports consisting of three USB 3.1 Gen2 Type-A, one USB 3.1 Type-C, two USB 3.0 Type-A and two USB 2.0 ports. A combined total of six audio ports split into five 3.5 mm audio jacks and single S/PDIF optical output controlled by a Realtek S1220A HD 8-channel audio codec, with a single LAN port being powered by an Intel I219V Gigabit networking controller. Finishing off the rear panel is a DisplayPort and HDMI 1.4b pairing of video outputs, as well as a handy PS/2 keyboard and mouse combo port.

The ASUS Prime Z390-A has an unknown MSRP as of yet and looks to offer users not looking to spending the additional budget on gaming related feature sets and flashy aesthetics; RGB is included on this model and white panels with RGB sets this system up really well from a design perspective. The native integration of USB 3.1 Gen2 into the Z390 chipset has been used well on this board and it looks to be a popular board for users not looking to use a WI-Fi enabled model.