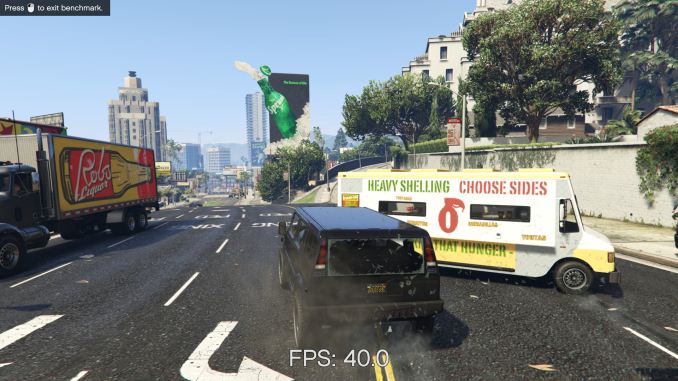 There was an interesting issue during testing that affected the RTX cards at 4K; running the benchmark would result in a blank screen for the entirety of the run. The image would appear with Alt+Enter to put it in windowed mode, but disappear again back in fullscreen. An external overlay resolved the issue, but performance results were identical either way. We really didn't have time to investigate thoroughly, but GTA V, especially with Social Club, can be quite finicky and I hesitate to call it a driver bug without digging into it more.

It's a testament to both GTA V and the nature of graphics optimization work that a GeForce card can only now average 60fps. Even still, it's restricted to the RTX 2080 Ti performance tier, which is roughly where the Titan V stands as well. Regardless, the results represent the performance scenario that NVIDIA is ultimately hoping to avoid: the 1080 Ti exceeding the 2080 in performance even with the Founders Edition tweaks. At this point, the 1080 Ti is a mature card and the offerings will skew towards tried-and-true halo custom cards, factory overclocked and well-cooled. Plain performance regression in reference settings is not something the RTX 2080 can easily afford with the higher price - Founders Edition or otherwise.