The Seagate Fast SSD seems to have a 67C cut-off before thermal throttling kicks in. After that, the writes go down to around 100 MBps (with drops even going as low as 10 - 20 MBps). On the other hand, the SanDisk Extreme Portable SSD is a lot more consistent. The cut-off is 75C, and the drop after thermal throttling is to 50 MBps. However, the device tries to get back to peak write performance as often as possible, in constrat to the behavior of the Seagate Fast SSD.

The Seagate Fast SSD shows two inflection points. The first one is quite early - after around 12GB of data transfer (as shown in the above graph). This is due to the shift from SLC cache to either directly writing data to the TLC region, or, a slowdown while transferring data from the cache to the TLC region. The SanDisk Extreme Portable SSD, on the other hand, shows a drop only after writing more than 250GB of data continuously. Even at that point, the drop is due to thermal throttling.

The SSDs being considered today are bus-powered, and it is given that the peak power consumption can't go beyond 4.5W to maintain compatibility with as wide a range of systems as possible. It is still relevant to take a fine-grained look at the power consumption profile. Using the Plugable USBC-TKEY, the bus power consumption for both SSDs was tracked while the CrystalDiskMark workloads were processed. The workloads were set up with an interval time of 30s.

The Seagate Fast SSD has peaks as high as 5W, while the SanDisk Extreme Portable peaks at 3.4W. The latter is obviously much more power efficient.

The performance of both SSDs is great and as advertised. The Seagate Fast SSD has higher short-term write transfer rates for real-world workloads, but, even a slightly sustained workload involving say, 15 - 20 GB, is likely to be handled in a more consistent manner by the SanDisk Extreme Portable SSD.

Moving on to the pricing aspect, we find Seagate at a disadvantage. The Fast SSD is priced at $280, but the SanDisk model is at $225, and the T5 1TB version is $250. The lack of verical integration might prevent Seagate from competing on price. 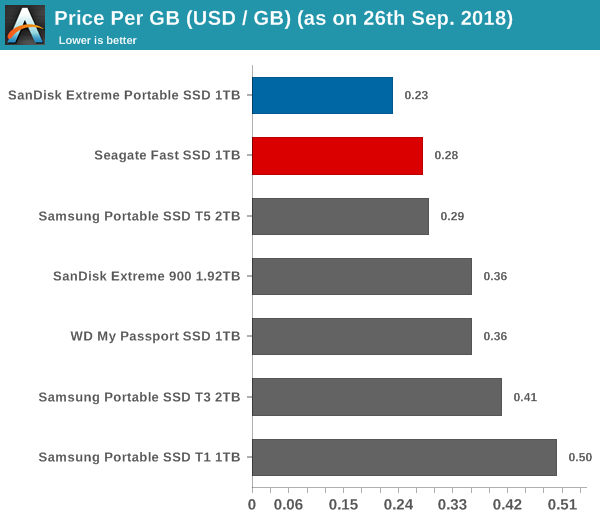 The Fast SSD does come with certain value-add features like dead-simple backup and sync software, and the Adobe Creative Cloud subscription. If the Fast SSD and the SanDisk Extreme Portable are within $5 - $10 of each other, the value additions could help tilt the choice in favor of the former. As it stands, the 1TB version of the SanDisk Extreme Portable is very attractively priced at $0.23 / GB. Compared to the Samsung T5, it boasts equivalent performance with a lower price and an IP55 rating. The choice of the SanDisk Extreme Portable is a no-brainer for power users. That said, the Seagate Fast SSD does come out on top in a lot of our typical DAS workloads that involve bursty writes. Some consumers might appreciate that aspect. However, at $280 (compared to SanDisk's $225), it appears to be a tough sell.