The 'Dynamic Thermal Guard' technology adopted by Samsung appeared interesting from the marketing description (automatic throttling to keep the case temperature below 45C). In order to figure out the impacts, I deleted the volume on the X5, and set up a fio workload to write sequential data to the raw drive with a block size of 128K and iodepth of 32 to cover 90% of the drive capacity. The internal temperature, instantaneous write data rate, and total amount of data written in total till that point of time were recorded.

We see that the thermal management scheme adopted by Samsung is very detrimental to long-running sequential write jobs (typical of first-time backups), despite managing to limit the internal SSD temperature to less than 56C. Write speeds often got down as low as 60 MBps. On the other hand, our DIY configuration with the SanDisk Extreme Pro 1TB SSD in the TEKQ Rapide aluminum Thunderbolt 3 enclosure managed to pass the same test without any issues in less than 1/10th of the time taken by the X5 for the same amount of data. The internal SSD temperature did go above the X5's (reached 57C at the end of our test), but, the passive-cooling friendly ridged aluminum enclosure managed to do an effective job.

Compared to the TEKQ Rapide, it does appear that the X5 chassis is unable to keep temperatures down without extensive throttling. The choice of magnesium compared to aluminum is puzzling (given that the thermal conductivity of aluminum and magnesium are 205 w/mK and 156 W/mK). In addition, the absence of additional surface area in the chassis to dissipate the heat (in the form of ridges or fins) is also a negative. Combined together, we see that the Samsung Portable SSD X5 throttles more under heavy loading compared to some of the other Thunderbolt 3 SSDs in the market.

The experiment also allowed us to determine the approximate SLC cache size of the internal SSD. On plotting the instantaneous write transfer rate along with the total data written up to that point of time, we see that the X5's SSD has around 40 - 45GB of SLC cache, while the SanDisk SSD in our DIY configuration has around 16 - 20GB of SLC cache.

The Thunderbolt 3 specifications indicate that the host port must be able to supply up to 15W for bus-powered devices connected to it. Since the Samsung Portable SSD X5 is a bus-powered device, it is given that its power consumption can't exceed 15W in order to be a certified Thunderbolt 3 device. It is still relevant to take a fine-grained look at the power consumption profile.. Using the Plugable USBC-TKEY, the bus power consumption for both SSDs was tracked while the CrystalDiskMark workloads were processed. The workloads were set up with an interval time of 30s.

We find that the power consumption stays mostly south of 7W, though we did notice spikes of up to 9W in our high-queue depth sequential write tests.

The Samsung Portable SSD X5 has no trouble supporting TRIM commands from the OS. The performance for most consumers is good enough - in fact, in our DAS suite, the X5 managed to lead the charts in almost all the tests. The issues start cropping up only under sustained loading in cases such as transferring 50+GB into the X5 without any break inbetween. I am still waiting to hear from Samsung on why they opted for a magnesium chassis compared to the aluminum used by most other competitive offerings. [Update (Samsung's response, paraphrased): Since the X5 is a portable product, it needs to be durable against external impact, light-weight, and dissipate heat well. Magnesium is much lighter than aluminum/steel and also durable, enabling use in products that require rigidity and lightness such as cell phones, cameras etc. Although aluminum has better thermal conductivity, we have found that magnesium is the optimal metal solution to meet all the three conditions - weight, durability, and heat dissipation.]

Moving on to the pricing aspect, we find that the X5 is not particularly cheap - we would have no trouble with that had the X5 not throttled significantly in our new extended sequential writes test. 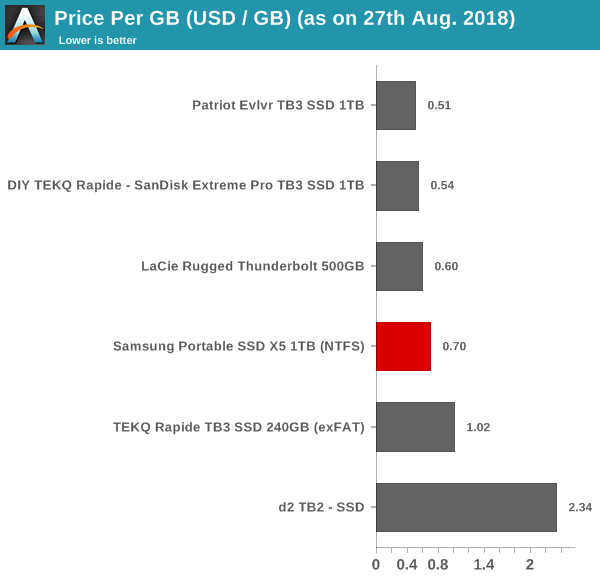 Consumers would be prudent to treat the X5 as a premium product - it performs admirably for the vast majority. However, for power users who frequently transfer 100s of gigabytes in one go, a solution like our DIY Thunderbolt 3 SSD is a better choice. Our DIY device does not look as sleek as the X5, but, it is cheaper and has more consistent performance.