A month ago we saw Qualcomm release a new “upper mid-range” SoC with the announcement of the Snapdragon 710 – the emphasis was on the fact that this was a new market tier aiming slightly below the top-tier flagship chipsets. Today, we’re seeing Qualcomm expand the traditional mid-tier and also what can be considered the low-end for smartphone devices. The Snapdragon 439 and 429 follow in the footsteps of the 435 and 425 and bring FinFET to the low-end; the Snapdragon 632 is more akin to the Snapdragon 652 as it’s now the first time we see big cores brought down to the lower mid-tier successor to the Snapdragon 630.

Starting off with the Snapdragon 632, the new SoC is positioned as a successor to the Snapdragon 630. The 600 series suffered from quite a bit of naming confusion as we saw very large performance differences between the 65x and 66x series and the lower numbered ones such as the Snapdragon 630, 615 and 617 – this was largely due to the fact that the lower 600 series SoCs were missing the processing power of larger “big” CPU microarchitecture cores, while the 650 and up were effectively positioned as more expensive tiers.

The Snapdragon 632 now continues this lower-tiered positioning within the 600 series, but brings for the first time the performance benefit of big cores to this price segment. For these big cores we find 4x Kryo 250s running at up to 1.8GHz. Qualcomm didn’t confirm what CPU core this is based on, but looking at the CPUID of an unannounced device it matches the Cortex A72 and this would also make sense given the lower Kryo 2xx naming scheme. Qualcomm reached back confirming these are Cortex A73s. The big cores are paired with another 4x Kryo 250s – but again we’re effectively talking about Cortex A53 cores as the little cores in the efficiency cluster. 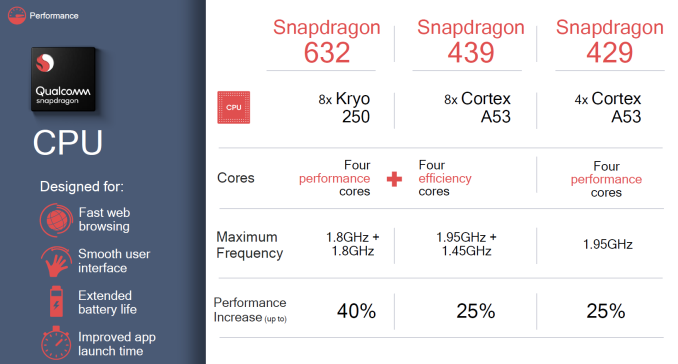 One of the most important characteristics of these new low-end SoCs is however that they’re manufactured on FinFET nodes – Qualcomm didn’t specify exactly the foundry or exact node but we’re likely talking about 14LPP or a 16FF variant, with the possibility of Qualcomm also third-sourcing these from UMC as well. Qualcomm reveals on its website the 632 is 14nm which likely points to Samsung 14LPP, and the 439 and 429 are listed as 12nm which points out to 12FFC from TSMC. This marks a generational shift as we see Qualcomm effectively have completed a total transition to FinFET products across its whole mobile SoC product line.

A large commercial advantage of the new chips is their design compatibility; the Snapdragon 632, 439, 429 are software compatible with each other and with the existing 626, 625 and 450 platforms. Furthermore the 632 is pin compatible with the 626, 625 and 450, and the 439 and 429 are pin compatible with each other. The software compatibility allows for a smaller resource investment on the part of OEMs and an accelerated time-to-market for devices. In particular, what seems to be very interesting here is the 632 being pin compatible with several older chips – It would be great to see OEMs be able to release quick refreshes of their devices with the new chip given that it’ll bring large performance improvements thanks to the new big CPU cores. 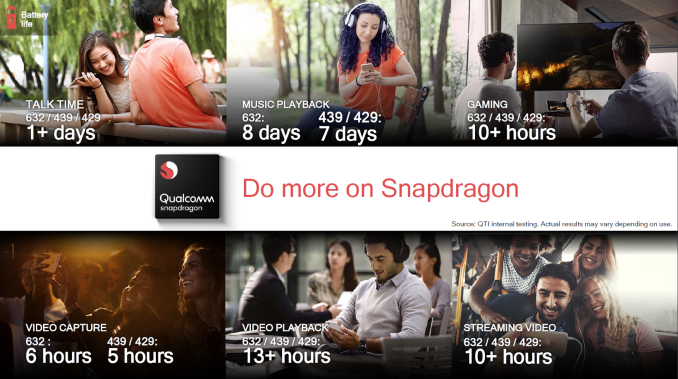 Overall the new mid- and low-end Snapdragons bring a generational improvement thanks to Qualcomm’s total switch to FinFET nodes across all of its line-up. The new SoC platforms are quoted be used in commercial devices released in the second half of 2018, which essentially means very soon.