Conclusion: Going for a Data Cache

At the hardware level, the Optane Memory M10 is a simple and straightforward update to the original Optane Memory, bringing a new capacity that some users will appreciate, and power management that was sorely lacking from the original. On the software side, the experience is quite similar to the first iteration of Optane Caching that Intel released a year ago with their Kaby Lake platform. The only big user-visible change is the ability to cache non-boot drives. This corrects the other glaring omission, giving the Optane Memory system an overall impression of being a more mature product that Intel is taking seriously.

Optane Memory caching now seems to be limited primarily by the fundamental nature of SSD caching: not everything can fit in the cache. Occasional drops down to hard drive performance are more frequent and more noticeable than when a flash-based SSD's SLC write cache fills up, or when a M.2 SSD starts thermally throttling. Neither of those happens very often for real-world use, but cache misses are still inevitable.

The latency from a flash-based SSD tends to grow steadily as the workload gets more intense, up to the point that there isn't enough idle time for garbage collection. The performance of most modern flash-based SSDs degrades gracefully until the SLC cache fills up. The latency distribution from an Optane+hard drive cache setup looks very different: latency is excellent until you try to read the wrong block, then you have to wait just as long as in a hard drive-only setup. 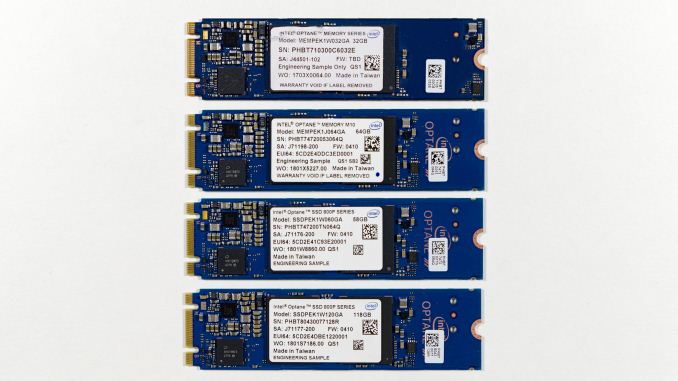 The key to making SSD caching work well for desktop use is thus to ensure that the cache is big enough for the workload. For relatively light workloads, the 32GB Optane Memory is often sufficient, and even the $25 16GB module that we haven't tested should offer a noticeable improvement in system responsiveness. For users with heavier workloads, the larger 64GB Optane Memory M10 and even the 118GB Optane SSD 800P may not be big enough, and the price starts getting close to that of a good and reasonably large SATA SSD.

For power users, the data drive acceleration mode is more appealing. A gamer might want to use a 256GB or 512GB SATA SSD for the OS and most programs and documents, but would need a 1TB or larger drive for his entire Steam library. A 1TB 7200RPM hard drive plus the 64GB Optane Memory M10 or the 58GB Optane SSD 800P is cheaper than a good 1TB SATA SSD, and the cache is large enough to hold one or two games. A 2TB hard drive plus the 118GB Optane SSD 800P can cache the even the largest of AAA games and is no more expensive than the cheapest 2TB SATA drive. For capacities beyond that, caching only gets more appealing. 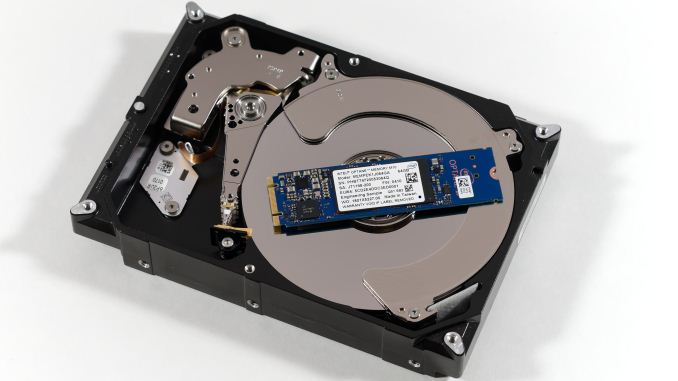 Our SYSmark testing showed that for many common tasks, adding even a 32GB cache to a hard drive can bring performance up to the level of a SSD-only configuration. There are a lot of lightweight everyday workloads that can fit well in such a cache, and for those users the larger 64GB Optane Memory M10 doesn't bring worthwhile performance improvements over the 32GB Optane Memory.

On the other hand, it is clear that no amount of fast storage can make up for a system crippled by too little RAM, which is a disappointment in a time when SSDs are getting cheaper but RAM prices are still climbing. Optane SSDs may be the fastest swap devices money can buy, but they're no substitute for having adequate RAM. The 4GB low-end configuration we tested is simply not enough anymore, and for future storage caching tests we will consider 8GB as the absolute minimum requirement before any storage performance upgrades should be considered.

Our synthetic benchmarks of Intel's Optane Memory caching confirmed the most predictable effects of cache size compared to working set size, but didn't reveal many nuances of Intel's cache management strategies. There is clearly some overhead relative to accessing just the SSD, but not enough eliminate the fundamental performance advantages of 3D XPoint memory. There also appears to be some write caching and combining done with system RAM, trading a bit of safety for improved write performance beyond even what the Optane SSDs alone can handle. Whether it's advertised or not, this tends to be a feature of almost every third-party add-on software for storage acceleration. It's the simplest way to improve storage benchmark numbers and the tradeoffs are quite acceptable to many users.

The Optane Memory caching seems to be quite responsive to changes in usage patterns. One launch of an application is sufficient to bring its data into the cache, and Intel isn't shy about sending writes to the cache. It doesn't appear that the Optane Memory caching system does anything significant to reduce wear on the cache device, so Intel seems confident that these cache devices have plenty of write endurance.

Intel's 3D XPoint memory is clearly a far better media for small cache drives than NAND flash, but it is still afflicted by a very high price per GB. Only the 16GB Optane Memory at $25 seems like an easy purchase to make, but it is small enough that its performance potential is much more limited than the larger Optane products. The 64GB Optane Memory M10 is expensive enough that skipping caching altogether and going with just a SATA SSD has to be seriously considered, even when shopping for 1 or 2 TB of storage. In spite of the power management the Optane Memory M10 adds over the original cache module, it still doesn't seem like a hard drive plus a cache module makes any sense for mobile use. Optane prices need to come down faster than NAND prices in order for this caching strategy to gain wide acceptance. This doesn't seem likely to happen, so Optane Memory will remain a niche solution—but that niche is definitely not as small as it was when Optane Memory was first introduced.