It’s fair to say that AMD’s notebook processor architecture has been somewhat lackluster in recent years, and as we saw back when Ian visited AMD, as the company tried to get by with Kaveri and Carrizo, it was somewhat hamstrung by the OEMs as well, with low-cost, low-quality devices, and performance constraints like single-channel RAM. That’s not the case with Ryzen Mobile though. Acer is offering it in a proper laptop, with an IPS display, SSD storage, and dual-channel memory.

As it did on the desktop, AMD is launching Ryzen Mobile as a turning point for their products. They are offering full quad-core processors in their 15-Watt range, with eight threads. That’s the same as Intel who only recently switched from dual to quad-core in the U series. But while Intel still has a CPU advantage with Kaby Lake Refresh, they’ve been let down with their UHD 620 graphics. AMD on the other hand, was able to leverage their Vega graphics processor and package it with the Ryzen Mobile CPU.

AMD has also been able to move to the 14 nm FinFET process by GlobalFoundries, so they are no longer as far behind on the foundry side either.

With the Zen core, AMD has been able to achieve the scalability of low-power processors such as the Ryzen Mobile with one CPU Complex (CCX) of four cores, all the way up to their larger desktop processors. They leverage their Infinity Fabric for memory, I/O, and PCIe, but also for their SenseMI interconnected sensor system which provide the telemetry to adjust the processor power and frequency on the fly. As we recently saw in the desktop Ryzen 2nd generation, AMD introduced Precision Boost 2 to the desktop, but that technology first launched on Ryzen Mobile. Precision Boost 2 is a telemetry-aware DVFS system which provides finer control over the CPU core frequency, with 25 MHz increments. The new system allows for higher boost levels under multi-core loads when the overall workload is not as demanding, whereas in the original technology they only offered two boost levels depending on if two or more than two cores were loaded. The advantage of the new system is that it listens to the telemetry to ensure that the CPU is boosted to the highest it can be without hitting a thermal, electrical, or utilization boundry, which should improve performance quite a bit over the original version.

Although the CPU frequencies are similar, the GPU is a larger unit in the 2700U, which is the model we have for review. It’s also important to note that unlike Intel, AMD only supports DDR4 on Ryzen, which is going to have an impact on laptops power usage compared to LPDDR3 that we still see in most Ultrabooks.

We’ve run the Acer Swift 3 through our standard laptop suite. We’re going to be updating our test suite soon with a few new tests, such as PCMark 10, and new web tests, but for this review it’s important to have more data to fall back on for comparisons. If you’d like to check out the Acer against any laptop we’ve tested, please use our online Bench. 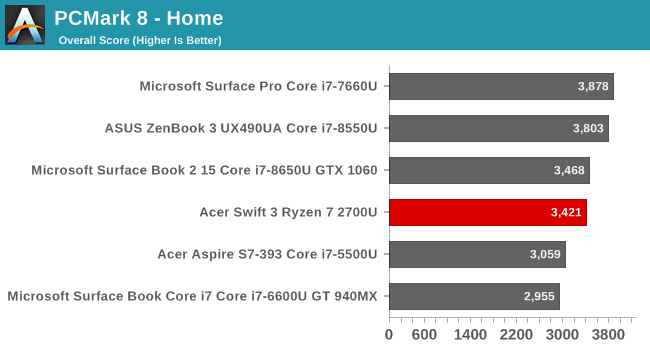 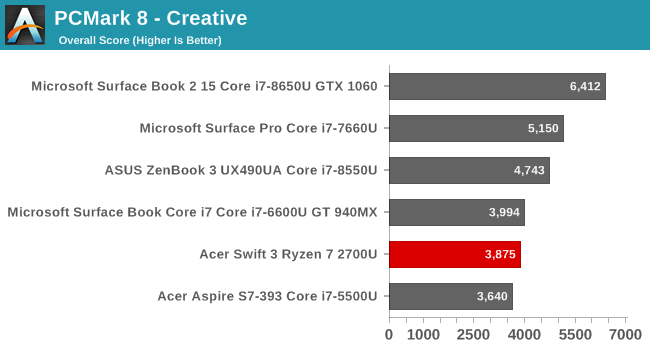 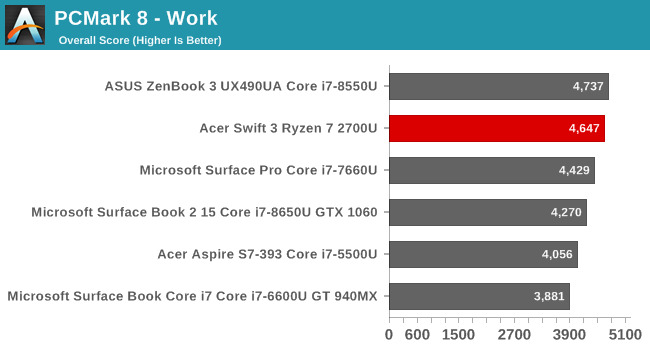 As an all-around test, PCMark tests every aspect of the system, so the CPU, GPU, memory, storage, and even display can impact the resuts. Here we see some interesting results. The Ryzen can’t quite hang with the latest Intel quad-core laptop processors, although it’s very competitive with the Skylake based notebooks, at least in terms of this test. 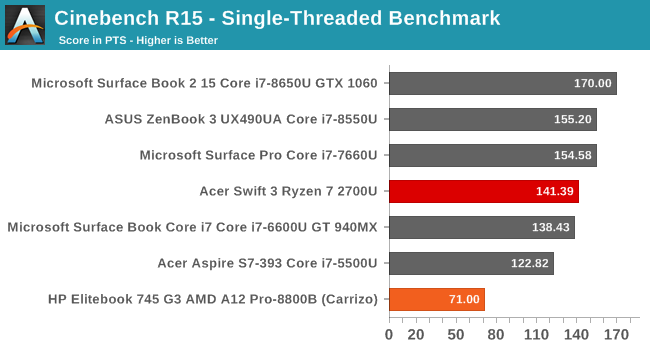 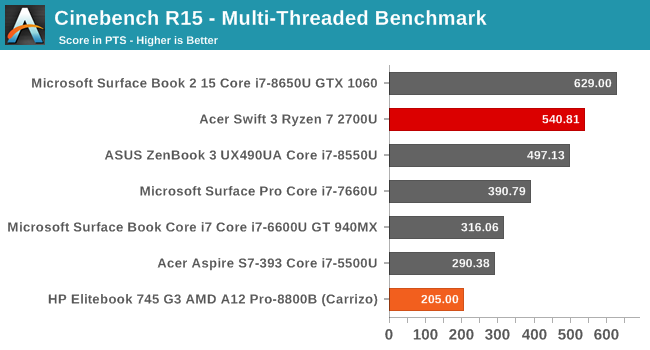 Cinebench is a pure CPU test, where higher IPC, higher frequencies, and more cores are the main ingredients to a strong result. Thanks to the four cores and eight threads, the multithreaded results are very good on the Acer, and in fact despite it not having as strong single-threaded performance as the ASUS Zenbook 3, it surpasses it in multithreaded. AMD says they have a “highly efficient SMT implementation vs. other 4C8T SoCs” and it does appear to be the case. Even compared to the Surface Book 2 which has the fastest KBL-R quad, the ratio of single-threaded to multi-threaded is higher on the AMD part. No, it can’t quite hit the same levels of performance, but it’s significantly faster than any of the 7th generation Core results. 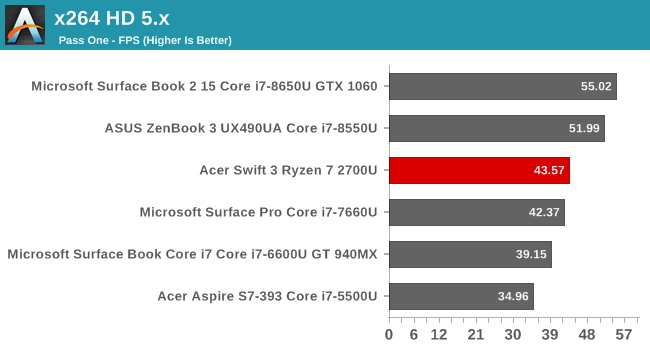 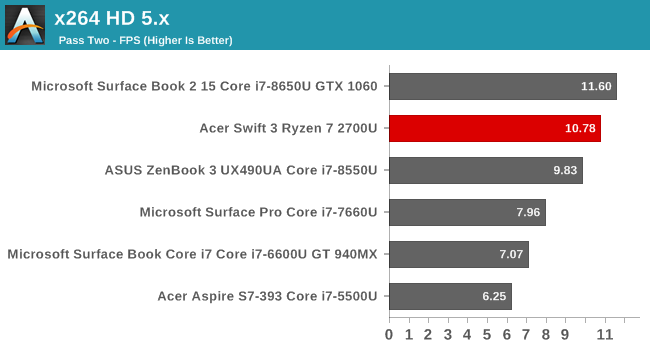 This test converts a video using software, and like Cinebench, is a CPU bound test which relies on more cores and higher frequency to go with strong IPC. Here we see a similar story to the Cinebench results, where the easier pass one result is not quite as strong as KBL-R, but the multithreaded result is much stronger. AMD has done some nice work to keep the Zen cores fed under multi-threaded loads even if they don’t quite have the IPC of KBL-R.

Web performance is important due to the volume of web use on a typical PC, so good performance here can translate to a good user experience, with less scrolling hiccups, and more responsive pages. We use Microsoft Edge on the current build of Windows 10 as our test vehicle. Web performance is one part CPU, and one part browser engine though, so over time, the same system should trend upwards in performance on the same tests, as improvements are made to the underlying browser. 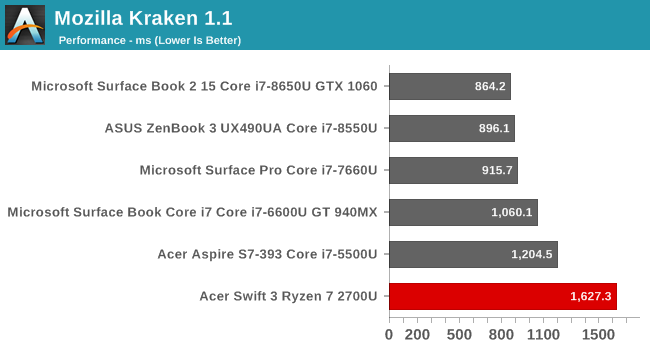 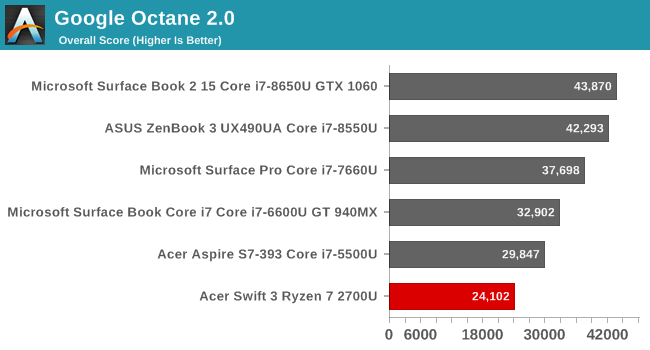 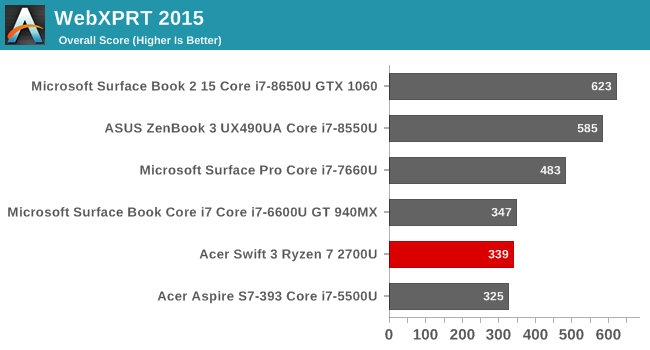 Here the results aren’t quite as rosy for AMD. The performance on the web benchmarks is a significant departure on what was seen on the previous benchmarks, with results firmly lower. Some of that will be down to Intel being able to boost to higher frequencies than the AMD chip, with Intel having about a 10% advantage in maximum boost on the Core i7-8650U, but Intel has also spent quite a bit of effort on their SpeedShift to be able to ramp up the frequency very quickly. This is especially important for the web tests which do a short amount of work. Precision Boost 2 just can’t seem to keep up.

Even though the AMD chip can’t quite offer the same levels of performance when compared to the latest Intel U series, it still offers competitive results, and is a massive step forward from Carrizo. We never got to test a Carrizo laptop, other than the one article Ian wrote, so we don’t have comprehensive results from our laptop suite, but even just looking at the Cinebench results, the HP Elitebook 745 G3 only got a ST score of 71, and a MT score of 205, compared to 141 ST and 540 MT for the Ryzen 2700U. That’s a 98.6% increase in single-threaded performance and a 163.4% increase in multi-threaded.

But Ryzen isn’t just about the CPU of course. AMD’s Vega GPU is packed in too.