The noise profile of the NUC8i7HVK is surprisingly good. At idle and low loads, the fans are barely audible, and they only kicked in during stressful gaming benchmarks. From a HTPC perspective, we had to put up with the fan noise during the decode and playback of codecs that didn't have hardware decode acceleration - 4Kp60 VP9 Profile 2 videos, for instance. Obviously, the unit is not for the discerning HTPC enthusiast who is better off with a passively cooled system.

Starting with Haswell, Intel, AMD and NVIDIA have been on par with respect to display refresh rate accuracy. The most important refresh rate for videophiles is obviously 23.976 Hz (the 23 Hz setting). As expected, the Intel NUC8i7HVK (Hades Canyon) has no trouble with refreshing the display appropriately in this setting. 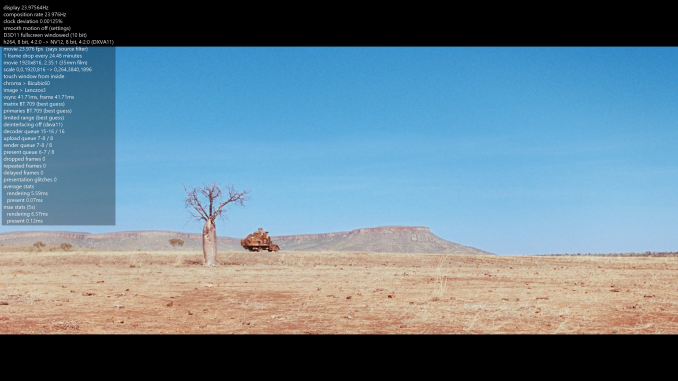 Evaluation of OTT playback efficiency was done by playing back the Mystery Box's Peru 8K HDR 60FPS video in YouTube using Microsoft Edge and Season 4 Episode 4 of the Netflix Test Pattern title using the Windows Store App, after setting the desktop to HDR mode and enabling the streaming of HDR video. 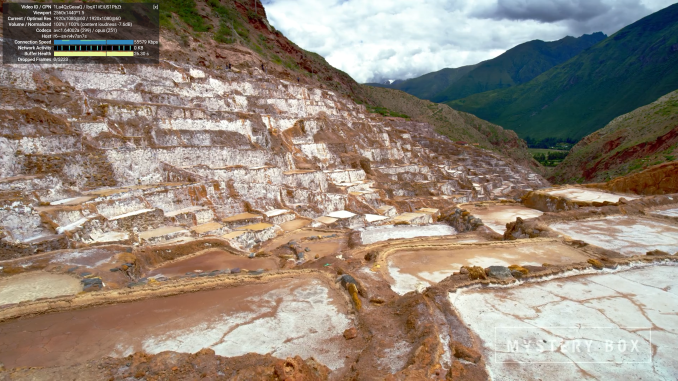 The YouTube streaming test, unfortunately, played back a 1080p AVC version. MS Edge utilizes the Radeon GPU which doesn't have acceleration for VP9 Profile 2 decode. Instead of software decoding, Edge apparently requests the next available hardware accelerated codec, which happens to be AVC. The graph below plots the discrete GPU load, discrete GPU chip power, and the at-wall power consumption during the course of the YouTube video playback. 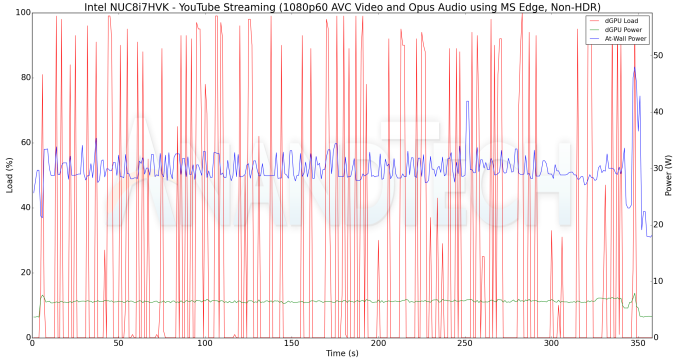 Since the stream was a 1080p version, we start off immediately with the highest possible bitrate. The GPU power consumption is stable around 8W, with the at-wall power consumption around 30W. The Radeon GPU does not expose separate video engine and GPU loads to monitoring software. Instead, a generic GPU load is available. Its behavior is unlike what we get from the Intel's integrated GPUs or NVIDIA GPUs - instead of a smooth load profile, it has frequent spikes close to 100% and rushing back to idle, as evident from the red lines in the graphs in this section. Therefore, we can only take the GPU chip power consumption as an indicator of the loading factor.

A similar graph for the Netflix streaming case (16 Mbps HEVC 10b HDR video) is also presented below. Manual stream selection is available (Ctrl-Alt-Shift-S) and debug information / statistics can also be viewed (Ctrl-Alt-Shift-D). Statistics collected for the YouTube streaming experiment were also collected here. 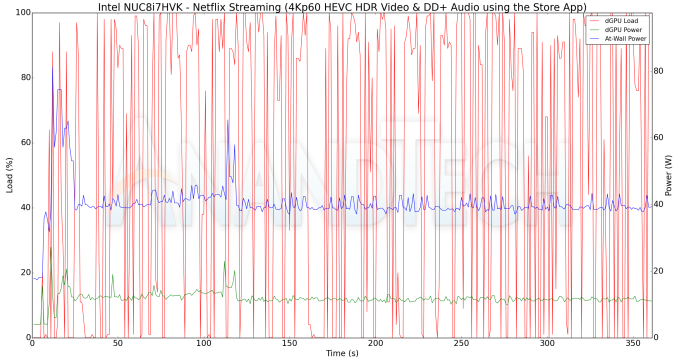 It must be noted that the debug OSD is kept on till the stream reaches the 16 Mbps playback stage around 2 minutes after the start of the streaming. The GPU chip power consumption ranges from 20W for the low resolution video (that requires scaling to 4K) to around 12W for the eventually fetched 16 Mbps 4K stream. The at-wall numbers range from 60W (after the initial loading spike) to around 40W in the steady state.

Update: I received a request to check whether the Netflix application was utilizing the Intel HD Graphics 630 for PlayReady 3.0 functionality. The screenshot below confirms that the 4K HEVC HDR playback with Netflix makes use of the Radeon RX Vega M GH GPU only. 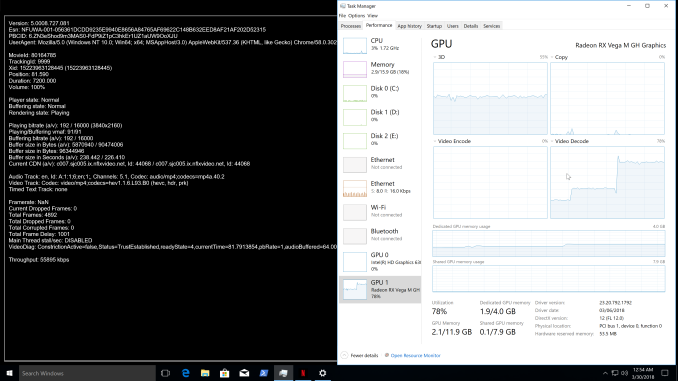 In order to evaluate local file playback, we concentrate on Kodi (for the casual user) and madVR (for the HTPC enthusiast). Under madVR, we decided to test out only the default out-of-the-box configuration. We recently revamped our decode and rendering test suite, as described in our 2017 HTPC components guide. 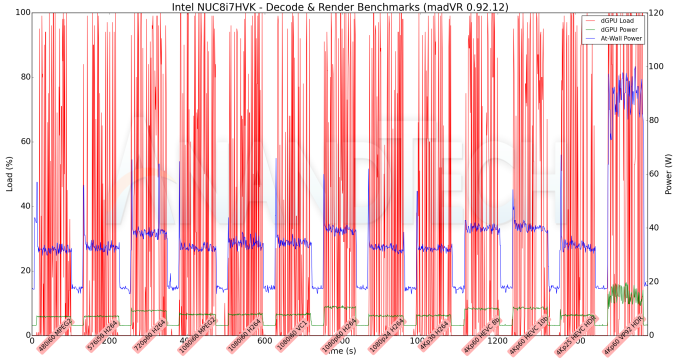 One of the praiseworthy aspects of the madVR / MPC-HC / LAV Filters combination that we tested above was the automatic switch to HDR mode and back while playing the last couple of videos in our test suite. All in all, the combination of playback components was successful in processing all our test streams in a smooth manner.

The same testing was repeated with the default configuration options for Kodi 17.6. The at-wall power consumption is substantially lower (around 30W) for the hardware-accelerated codecs. The GPU chip power is around 8W consistently for those. For the VP9 Profile 2 case, the at-wall number rises to 70W, but, there is not much change in the GPU chip power. We did encounter a hiccup in the 1080i60 VC-1 case, as the playback just froze for around 5 - 10s - evident in the graph below (the files were being played off the local SSD). 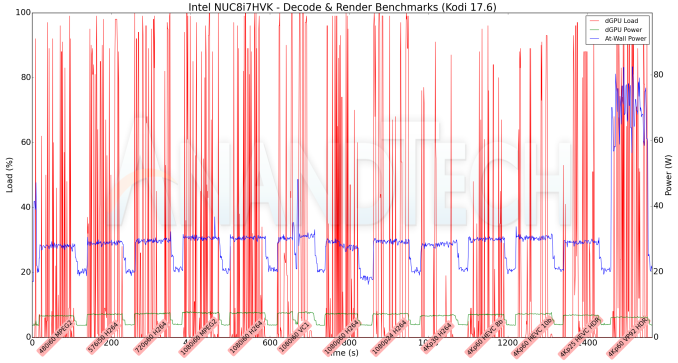 We attempted to perform some testing with VLC 3.0.1, but, encountered random freezes and blank screen outputs while using the default configuration for playing back the same videos. It is possible that the VLC 3.0.1 hardware decode infrastructure is not as robust as that of the MPC-HC / LAV Filters 0.71.0 combination, and the hardware acceleration APIs behave slightly differently with the Radeon GPU compared to the behavior seen with Intel's integrated GPU and  NVIDIA's GPU.

Moving on to the codec support, while the Intel HD 630 is a known quantity with respect to the scope of supported hardware accelerated codecs, the Radeon RX Vega M GH is not. DXVA Checker serves as a confirmation for the former and a source of information for the latter. 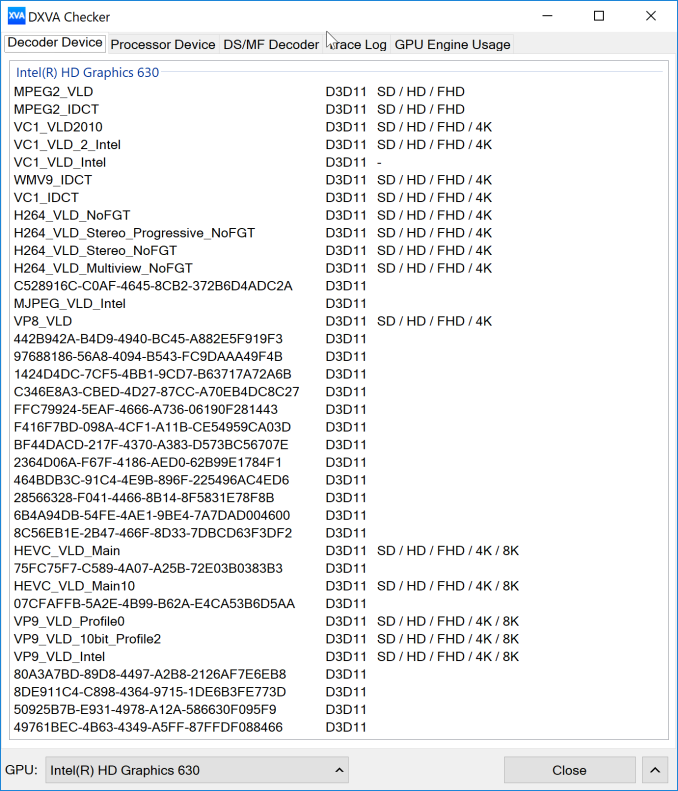 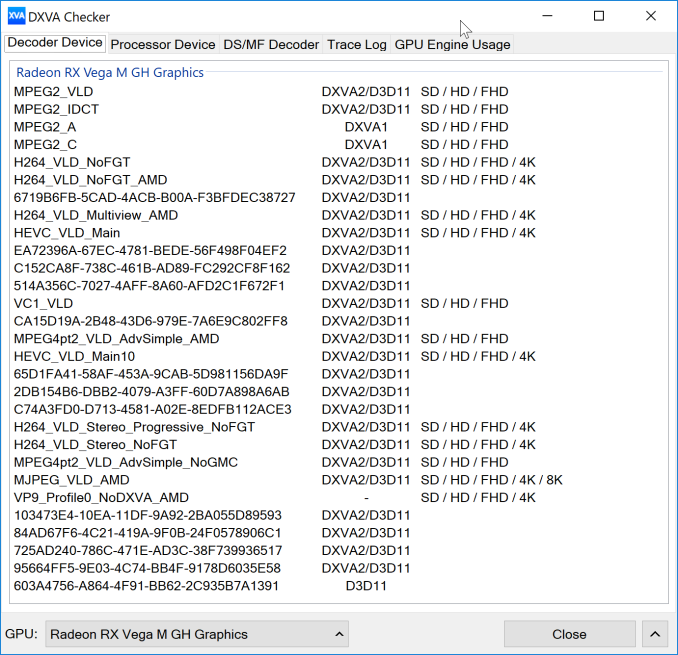 We can actually see that the codec support from the Intel side is miles ahead of the Radeon's capabilities. It is therefore a pity that users can't somehow set a global option to make all video decoding and related identification rely on the integrated GPU.

Intel originally claimed at the launch of the Hades Canyon NUCs that they would be able to play back UltraHD Blu-rays. The UHD BD Advisor tool from CyberLink, however, presented a different story. 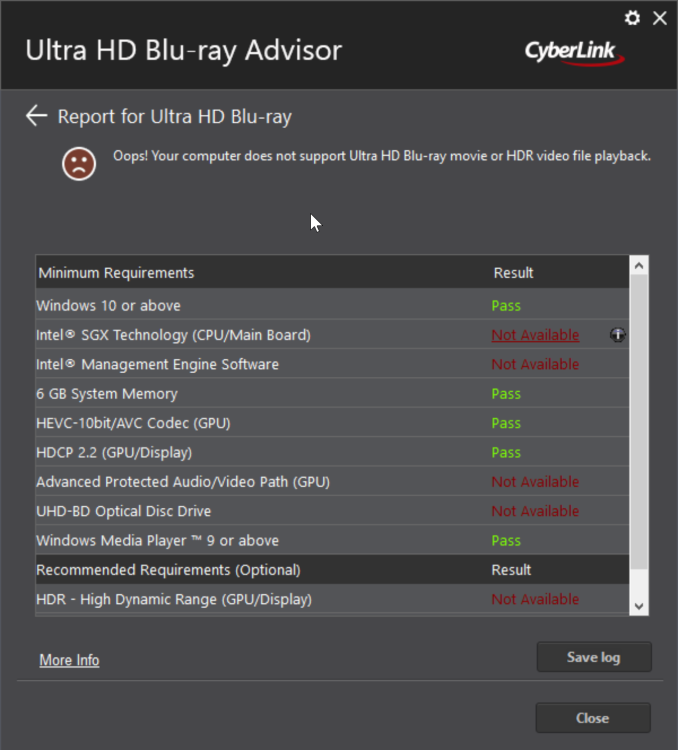 After a bit of back and forth with Intel, it appears that the Hades Canyon NUCs will not be able to play back UHD Blu-rays. Apparently, the use of the Protected Audio Video Path (PAVP) in the integrated GPU is possible only if the display is also being driven by the same GPU. It turned out to be quite disappointing, particularly after Intel's promotion of UHD Blu-ray playback and PAVP as unique differentiating features of the Kaby Lake GPU.