The E8 controller supports two idle power states, implemented as NVMe Power States 3 and 4 (power states 0, 1 and 2 are operational states with successively lower power limits). The firmware version E8FM11.4 used by the MyDigitalSSD SBX doesn't use power state 4 when the NVMe Autonomous Power State Transition (APST) feature is enabled, which is what most systems in the real world rely on for NVMe power management. The drives can be put into PS4 when APST is disabled and the OS manually manages the drive's power states. The relatively new power and thermal management features from the version 1.3 NVMe spec are not implemented.

(PS4 not usable by APST with current firmware)

Note that the above tables reflect only the information provided by the drive to the OS. The power and transition latency numbers are often very conservative estimates, but they are what the OS uses to determine which idle states to use and how long to wait before dropping to a deeper idle state. 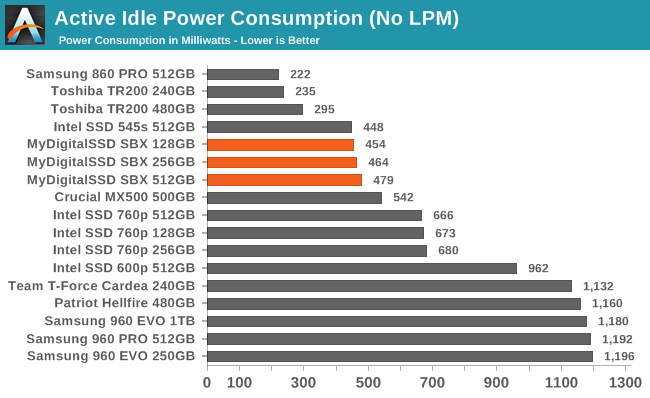 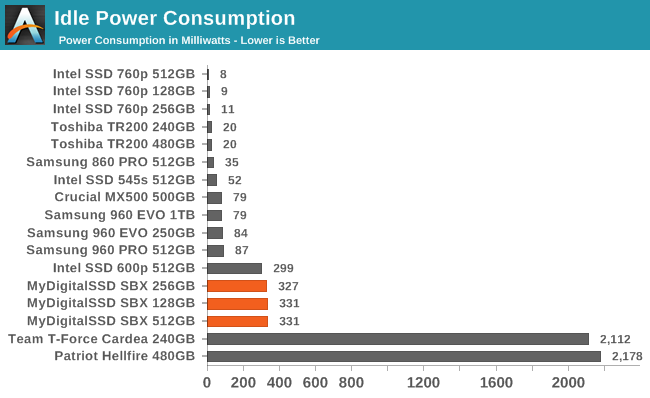 The active idle power draw of the MyDigitalSSD SBX is pretty good for a NVMe drive and on par with many mainstream SATA SSDs. The situation when PCIe ASPM and NVMe APST are enabled isn't great, but at least the Phison controllers are no longer freaking out and paradoxically increasing power consumption. The power savings we observed seem to come mostly from PCIe ASPM, and it makes little difference whether the drive is asked to use APST or not. The drive doesn't stay within its own declared limit of 100mW for PS3.

Also important to the E8 platform's overall idle power consumption is how background processing is handled. When idle, the drive will periodically wake up to perform background processing such as garbage collection. For the first few minutes after the drive is powered on, the interval between those wake-ups is 0.8 seconds, then the drive slows to waking up once every 5 seconds. These wake-ups continue whether or not the drive has background garbage collection or SLC cache flushing to do. Since the drive's power spikes to just over 1W during these active periods and they last for about 200ms each, this increases the overall idle power draw by more than 20%. 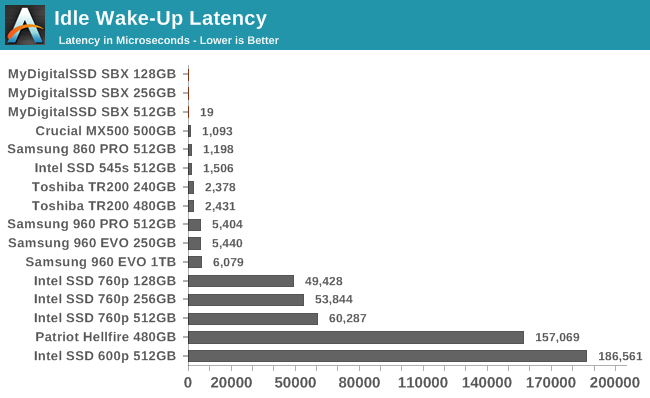 The idle wake-up latency test shows no significant difference in performance for the SBX between having all the power management features enabled or disabled—sometimes the measurements are faster with power management enabled, but still within the margin of error, so we're showing the latency as just zero in those cases. It is clear that no deep power saving measures are being taken within the SSD in this configuration, so there is nothing that would impose a significant wake-up delay.