The Intel SSD 760p is intended to be a mainstream product for a retail SSD market that is increasingly migrating away from SATA SSDs. Critical to that goal, the Intel SSD 760p is almost always faster than any SATA SSD, and it is one of the first NVMe SSDs to offer idle power levels that are competitive with the best SATA SSDs. Those are important thresholds for budget NVMe SSDs, and the Intel 600p frequently fell short of that standard. And on the few synthetic tests where the 760p is slower than Samsung's new SATA king (the 860 PRO), it isn't far behind.

It was difficult to justify paying for the Intel 600p over a good SATA drive, because the workloads where the 600p was sure to outperform the SATA drive were the lighter tasks where either drive would be plenty fast. The Intel SSD 760p does not suffer from this problem. It handles light or heavy workloads well, and it doesn't lose much performance as it fills up. In any use case, the performance is a step up from SATA SSDs.

Compared to other NVMe SSDs, the 760p is clearly not a high-end drive. It beats the once-premium but now outdated 400GB Intel SSD 750 in most performance tests, but Samsung's recent NVMe SSDs are often far faster than the 760p. The Samsung 960 PRO is clearly in a different league from the 760p, but the TLC-based PM981 also outperforms the 760p and its eventual retail version may not carry much of a price premium over the 760p. The Samsung 960 EVO is currently a bit more expensive than the 760p but largely justifies that price. 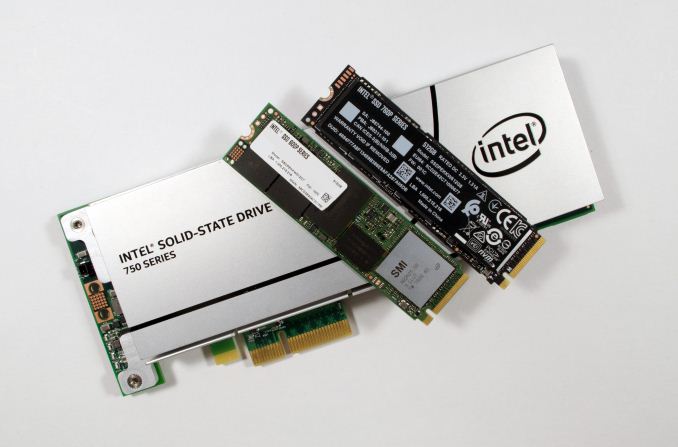 Historically, TLC-based SSDs tend to be slower than MLC-based SSDs. That trend doesn't hold true at the moment: the combination of 64L 3D TLC and Silicon Motion's second-generation NVMe controller is competitive with the NVMe SSDs that paired Toshiba's 15nm planar MLC NAND with controllers from Phison and Marvell. Almost all SSD manufacturers are eliminating MLC NAND from their consumer product lines. The Intel SSD 760p, in turn, is one of several drives that show this can be a reasonable strategy. It works especially well for Intel since they have Optane SSDs to overshadow Samsung's MLC-based 960 PRO.

We expect the remaining NVMe products based on planar MLC NAND to quickly disappear from the market now that Toshiba and Micron are shipping 64L 3D TLC that works well with SSD controller solutions from Silicon Motion and Phison. Unlike when the mainstream SATA market first switched over to TLC, this transition shouldn't be a big step backwards for performance and endurance.

Even though the 760p represents a big step forward for Intel's consumer SSDs, it feels like Intel is still playing catch-up. Samsung's current 960 EVO has been offering somewhat better performance than the 760p for over a year, and the next generation based on the OEM PM981 should be announced soon. We are also looking forward to testing how well other new entry-level NVMe SSDs perform. Our samples of the MyDigitalSSD SBX based on the Phison E8 controller arrived yesterday. These drives are even cheaper than the Intel 760p, and DRAMless NVMe SSDs should be cheaper still.

Intel has been shipping their 64L 3D TLC to consumers since the June 2017 launch of the Intel 545s. They clearly needed to wait for a suitable controller and sufficient supplies of NAND before launching the 760p. Fortunately for them, most of their competition has also been unable to jump ahead. Compared to Samsung, Intel's consumer SSDs are lagging, but against the rest of the market, Intel is doing alright.

Meanwhile the pricing of the Intel SSD 600p doesn't stand out as clearly as it once did, but it is still nice to see the 760p debut below that level. The Western Digital WD Black matches the pricing on the 760p, and the 760p is a very clear winner in that match-up. With the 760p now on the market, Western Digital needs to start taking the NVMe market more seriously and update the WD Black as soon as possible.

Likewise, the drives still using planar MLC NAND are ready for retirement. They trade blows with the 760p on performance but they cost too much. Some—like the Intel SSD 750 and some Phison E7 drives—are clearly out of production and getting harder to find, but the Toshiba OCZ RD400 is still out there with an unjustifiable price and no publicly announced successor. The Plextor M8Pe is still on the market, but at least its successor M9Pe with 3D TLC has been announced and sampled for review and should hit the shelves soon.

In today's market, the Intel SSD 760p looks like a reasonable choice for an entry-level NVMe drive. But with so many big changes arriving this quarter and the next, it is hard to make predictions about where the 760p will stand in a few months. The entry-level NVMe market is starting to really take off, and we don't know who will be most aggressive with their pricing.