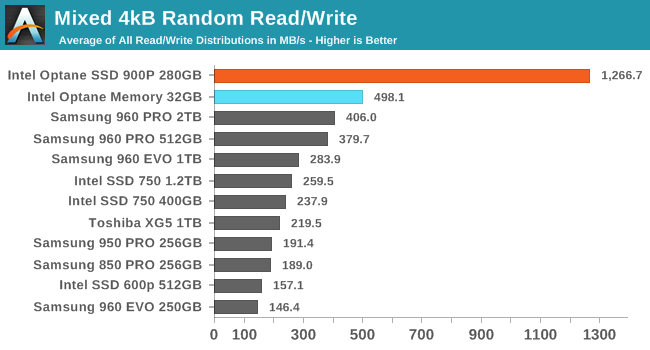 The mixed random I/O performance of the Intel Optane SSD 900P is completely unmatched. The small Optane Memory M.2 is the second fastest drive we've tested, and the fastest flash-based SSD is only a third as fast as the Optane SSD overall.

At the very end of the test, when the workload shifts to pure random writes, Samsung's fastest SSDs are able to batch the writes and dramatically improve throughput, almost enough to catch up to the slowest speed the Optane SSD hits during this test. 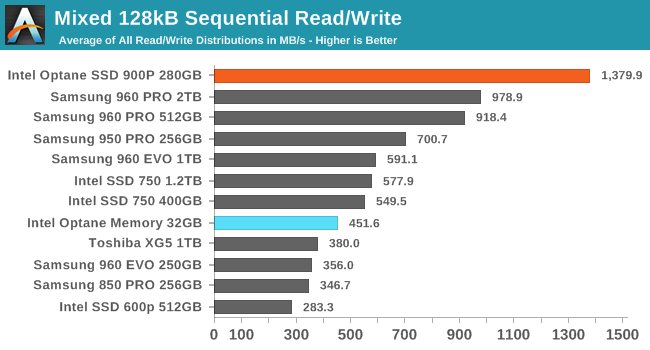 The Intel Optane SSD 900P doesn't quite dominate the mixed sequential I/O test to the extent that it trounced the competition in the mixed random I/O test, but it still breaks the record with a 40% higher average throughput than the fastest flash-based SSD.

The Optane SSD 900P's performance wavers a bit as the workload changes, but the general trend is a gradual reduction in performance as the proportion of writes increases. The flash-based SSDs tend to show an sharper decline in performance during the first half of the test, and the good ones recover most of that performance over the course of the second half. But the low performance in the middle of the test brings the averages way down and leaves the Optane SSD alone at the top.