Opinion: Why Counting ‘Platform’ PCIe Lanes (and using it in Marketing) Is Absurd

It’s at this point that I’d like to take a detour and discuss something I’m not particularly happy with: counting PCIe lanes.

The number of PCIe lanes on a processor, for as long as I can remember, has always been about which lanes come directly from the PCIe root, offering full bandwidth and with the lowest possible latency. In modern systems this is the processor itself, or in earlier, less integrated systems, the Northbridge. By this metric, a standard Intel mainstream processor has 16 lanes, an AMD Ryzen has 16 or 20, an Intel HEDT processor has 28 or 44 depending on the model, and an AMD Ryzen Threadripper has 60. 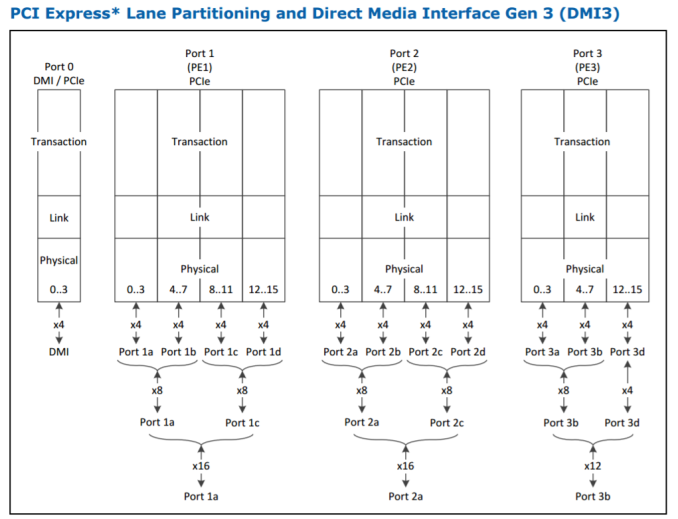 In Intel’s documentation, it explicitly lists what is available from the processor via the PCIe root complexes: here 44 lanes come from two lots of sixteen and one twelve lane complex. The DMI3 link to the chipset is in all but name a PCIe 3.0 x4 link, but is not included in this total.

The number of PCIe lanes on a chipset is a little different. Chipsets are for all practical purposes PCIe switches: using a limited bandwidth uplink, it is designed to carry traffic from low bandwidth controllers, such as SATA, Ethernet, and USB. AMD is limited in this regard, due to spending more time re-entering the pure CPU performance race over the last few years and outsource their designs to ASMedia. Intel has been increasing its PCIe 3.0 lane support on its chipsets for at least three generations, now supporting up to 24 PCIe 3.0 lanes. There are some caveats on what lanes can support which controllers, but in general we consider this 24.

Due to the shared uplink, PCIe lanes coming from the chipset (on both the AMD and Intel side) can be bottlenecked very easily, as well as being limited to PCIe 3.0 x4. The chipset introduces additional latency compared to having a controller directly attached to the processor, which is why we rarely see important hardware (GPUs, RAID controllers, FPGAs) connected to them.

The combination of the two lends itself to a variety of platform functionality and configurations. For example, for AMD's X399 platform that has 60 lanes from the processor, the following combinations are 'recommended':

What has started to happen is that these companies are combining both the CPU and chipset PCIe lane counts, in order to promote the biggest number. This is despite the fact that not all PCIe lanes are equal, they do not seem to care. As a result, Intel is cautiously promoting these new Skylake-X processors as having ’68 Platform PCIe lanes’, and has similar metrics in place for other upcoming hardware.

I want to nip this in the bud before it gets out of hand: this metric is misleading at best, and disingenuous at worst, especially given the history of how this metric has been provided in the past (and everyone will ignore the ‘Platform’ qualifier). Just because a number is bigger/smaller than a vendor expected does not give them the right to redefine it and mislead consumers.

To cite precedent: in the smartphone space, around 4-5 years ago, vendors were counting almost anything in the main processor as a core to provide a ‘full core count’. This meant that GPU segments became ‘cores’, special IP blocks for signal and image processing became ‘cores’, security IP blocks became ‘cores’. It was absurd to hear that a smartphone processor had fifteen cores, when the main general purpose cores were a quartet of ARM Cortex A7 designs. Users who follow the smartphone industry will notice that this nonsense stopped pretty quickly, partly due to anything being called a core, but some hints towards artificial cores potentially being placed in the system. If allowed to continue, this would have been a pointless metric.

The same thing is going to happen if the notion of ‘Platform PCIe Lanes’ is allowed to continue.