The impacts of enabling encryption on Samsung's Portable SSDs had been evaluated in the review of the T1 itself. The controller (responsible for the encryption, amongst other things) has not changed between the T1 and the T5. So, we ran a few tests to confirm that enabling encryption didn't have any discernible performance impact.

The Portable SSD T5 is a bus-powered device, and it is given that the peak power consumption can't go beyond 5W to maintain compatibility with as wide a range of systems as possible. It is still relevant to take a fine-grained look at the power consumption profile. Using the Plugable USBC-TKEY, the bus power consumption for both SSDs was tracked while the CrystalDiskMark workloads were processed. The workloads were set up with an interval time of 30s. 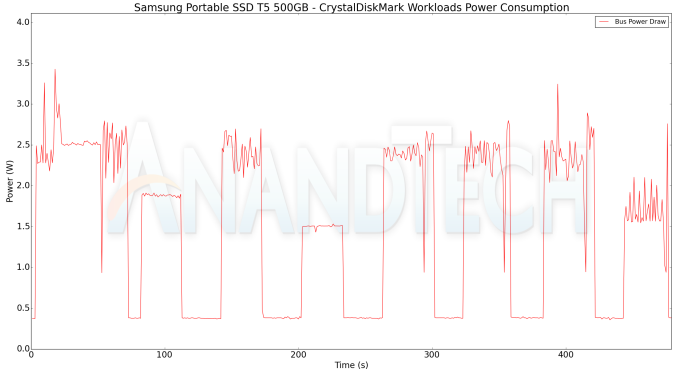 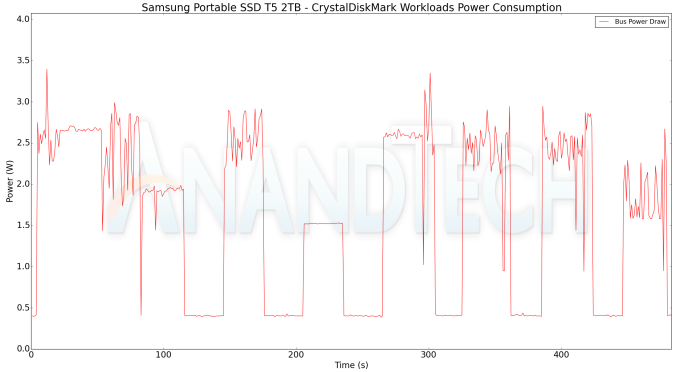 Support for TRIM is a much more interesting feature, given that neither the T1 nor T3 supported it. Though Samsung doesn't officially claim TRIM support for the T5, we formatted one of the drives in NTFS to verify the status. 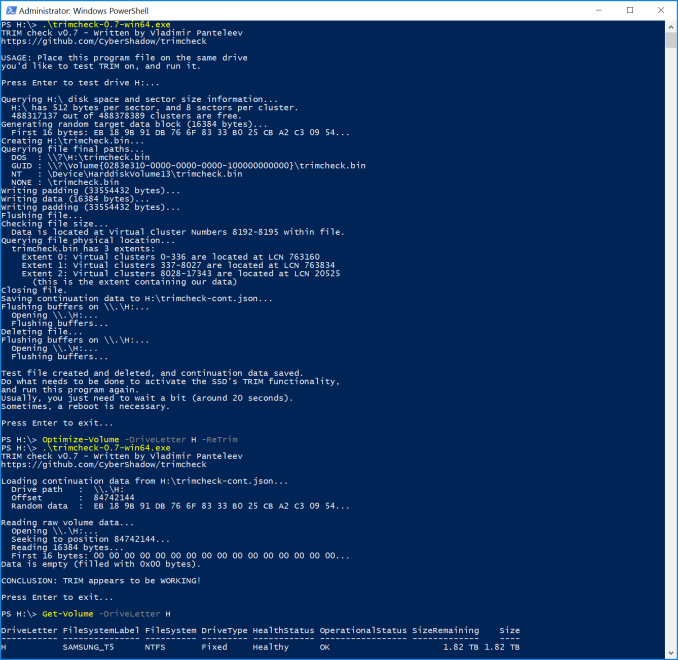 We were pleasantly surprised to find that TRIM was enabled. It is likely that the new ASMedia bridge chip has contributed to the availability of this feature.

Moving on to the pricing aspect, it must be remembered that the Portable SSD T5 is a pilot vehicle for Samsung's 64-layer V-NAND as its production ramps up. Samsung naturally expects this to be a low-volume, high-margin part. Therefore, despite the higher density, consumers should not expect much difference in the cost per GB compared to other external SSDs in the market. The 2TB variant will have a MSRP of $800 and the 500GB will retail at $200. At 40 cents/GB, it is priced close to other such products currently in the market. 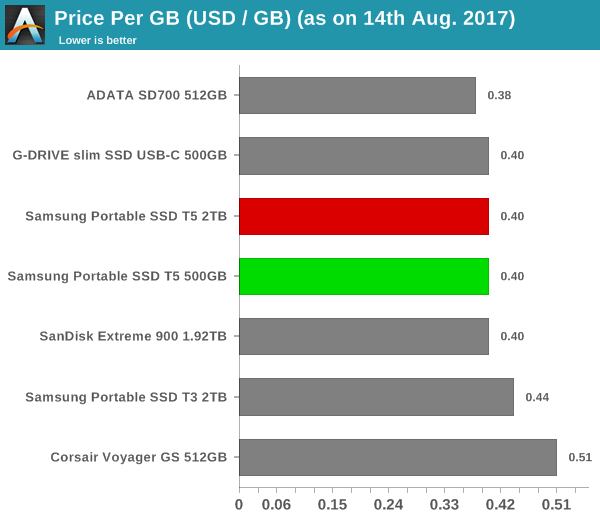 Coming to the business end of the review, Samsung must be commended for finally enabling TRIM in the Portable SSD series. The thermal design for such compact products is always challenging, and Samsung has done a decent job of keeping temperatures below 70C even under extreme stress. However, there is always scope for improvement.

In terms of future products in this lineup, Samsung could experiment with more compact form factors / thumb-drive type designs (similar to the Corsair Voyager GS / GTX series). Samsung had talked about targeting the content capture community with the T5 SSDs. Making an impact in that market segment requires additional features - water-proofing and dust-proofing are appreciated. For example, the ADATA SD700 available at a slightly better price point (in terms of USD/GB) carries an IP68 rating. In addition, a RAID-ed design similar to the SanDisk Extreme 900 or Netac Z5 can also help in boosting performance to take advantage of the full capabilities of the USB 3.1 Gen 2 interface.