We have reviewed at least one BRIX in each generation over the last four years. Using Skylake, GIGABYTE launched a wide range of solutions targeting different market segments within the UCFF space. The Kaby Lake version of their BRIX-H lineup builds upon that success by tweaking a few of the Skylake models to provide consumers with more choices (while taking advantage of some new Kaby Lake features). Compared to other Kaby Lake UCFF PCs such as the MSI Cubi2-005B and the ASRock Beebox-S 7200U, GIGABYTE's KBL-U BRIX lineup has a number of advantages.

The KBL-U BRIX units provide user-friendly support for M.2 2280 PCIe NVMe drives. The Cubi2-005B doesn't support M.2 2280 drives at all, while the Beebox-S needs a riser due to its smaller chassis dimensions. In addition, unlike the GB-BKi7HA-7500, the Beebox-S doesn't have thermal pad protection for the M.2 SSD.

The KBL-U BRIX H units (such as the GB-BKi7HA-7500 that we have reviewed here) offers simplified installation and cable management for 2.5" drives. The SATA power and data cables are integrated and come pre-installed on the board. In the other two UCFF PCs that we have reviewed before, the power header and data cable are separate and a pain to install within the space constraints imposed by the form factor.

GIGABYTE provides more choices to the end user, with the right unit for purchase being dependent on the intended use-case. The KBL-U BRIX lineup has Core i3, i5 and i7 varieties, while the Beebox-S has only the first two. The Cubi2 lineup does have all the three, but, GIGABYTE outscores MSI by having a Thunderbolt option as well. In addition, GIGABYTE has USB 3.1 Gen 2 on all their Kaby Lake BRIX units. The Cubi2 doesn't have it in any of their offerings.

The KBL-U BRIX units support HDCP 2.2. They can be used to play back Netflix 4K content. Unlike the MSI Cubi2-005B, the GB-BKi7HA-7500 does have a LSPCon for HDMI 2.0 output with HDCP 2.2 capability. Like the Beebox-S 7200U, the GIGABYTE BRIX unit can also deliver 4K Netflix - one of the primary reasons that make Kaby Lake mini-PCs attractive for use as a HTPC.

Despite the above positives, there are certain areas that GIGABYTE can improve upon. The UEFI BIOS is pretty basic, particularly when compared to ASRock's Beebox BIOS. The latter features more fine-grained user control over the DRAM timing settings, online automatic BIOS updates and other value additions. The system also needs a better sound profile. Subjectively speaking, the fan in the GB-BKi7HA-7500 makes more noise compared to the other two UCFF PCs that we have analyzed before. The choice of fan, as well as the default fan curves in the BIOS, needs some attention from GIGABYTE. Finally, a flagship UCFF PC with a Core i7 processor definitely needs a 2x2 802.11ac WLAN solution. GIGABYTE should upgrade to either the Intel AC8260 or AC8265 from the currently install Intel AC3168 solution. 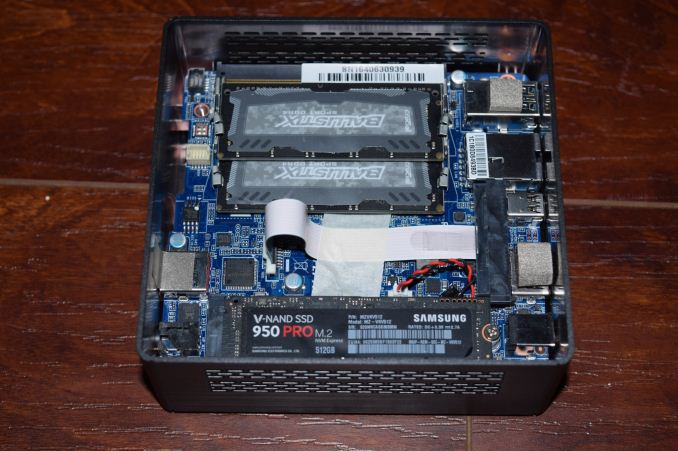 The GIGABYTE GB-BKi7HA-7500 has a selling price of $500 on Newegg. But, the Thunderbolt version with an additional SDXC slot is just $10 more. Given that the version that we reviewed does not seem to be stocked anywhere in the US, it is a no-brainer to go with the GB-BKi7HT-7500 and get similar performance with additional future-proofing (Thunderbolt 3) capabilities. Given the absence of any significant premium for the Thunderbolt version, we believe GIGABYTE should focus only on Alpine Ridge (instead of the ASMedia ASM1142) for USB 3.1 Gen 2 support in the BRIX lineup.