The Surface Studio is the first desktop that I have used which is designed to have only the power cord running to it, and even the power cord is well thought-out and has a very solid friction fit into the base. The rest of the peripherals all connect over Bluetooth for a cable-free experience. This is somewhat important on the Studio because when you want to use it in drafting mode, the peripherals need to get out of the way, and not having cables to deal with makes this a much easier task.

Microsoft ships the Studio with a Bluetooth keyboard and mouse, both finished in the same gray color as the Studio and other Surface devices. The keyboard is a full keyboard with number pad on the right side, and the top row of function keys are half-height. The key travel and feel is very similar to the Surface Book laptop keyboard, with short travel and a clicky feel. The shallow height of the keyboard does allow it to be tucked up against the base of the device when the display is tipped down, but there is a bit of interference with the display at it’s lowest angle, so it should be moved out of the way when used like that. It has two AAA batteries, and Microsoft says they can last up to twelve months on a charge. As a standard keyboard, it works well, but it would be nice if it held additional batteries to allow for some backlighting. People who prefer mechanical keyboards are not going to love the design, but it fits in well with the design and feel of the Studio. For those wondering, it does come paired with the Studio in the box, and you just have to pull a tab to have the included batteries power it up. 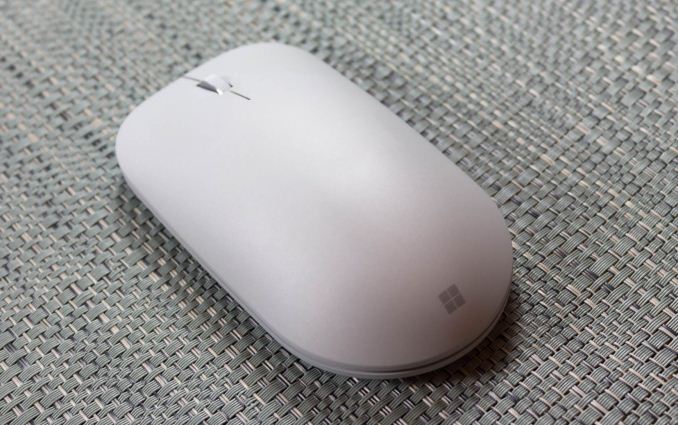 The mouse is similar in design and feel, and also comes paired out of the box. It is small, light, and features a blue light for tracking. It seems to track very well even without a mouse pad, which is not surprising since Microsoft has a lot of experience designing mice. The overall fit and feel is a bit too flat for my liking though, and I would prefer a mouse with more buttons to increase the functionality. It is a rather simple two button mouse with a scroll wheel, but luckily there are plenty of other mice to choose from if you prefer something else. 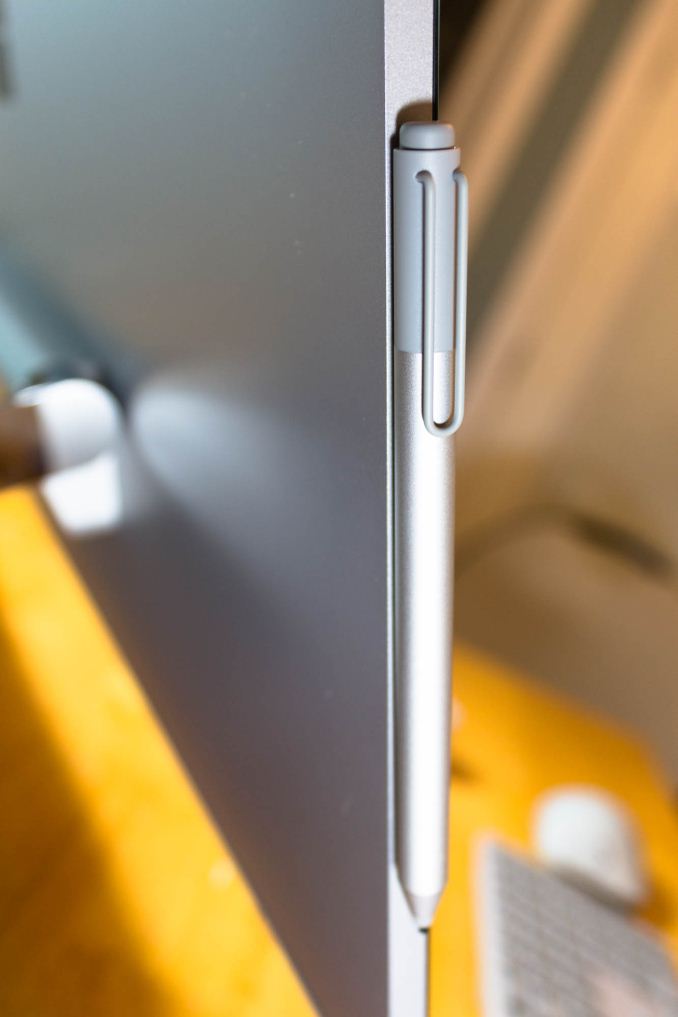 The final piece that comes in the box is the Surface Pen. Talking to Microsoft, they made it very clear that they wanted to ensure that the same pen could be used across the Surface Pro, Surface Book, and Surface Studio. That sounds simple enough, but with the much larger screen on the Surface Studio, it can be difficult to have precise accuracy without increasing the voltage on the pen itself. With some engineering, they were able to avoid this issue, allowing them to keep the same pen design across their consumer products, with only the Surface Hub pen having a different design. Microsoft even stated that the Surface Studio further increases the accuracy of the pen experience, which is something they have continued to work on since the Surface Pro 3 switched from Wacom, used on the first two generation devices, to N-Trig. And while the pen “only” supports 1024 levels of pressure sensitivity, it can quickly and easily be adjusted in the Surface app on the device to make it suit your own preferences. 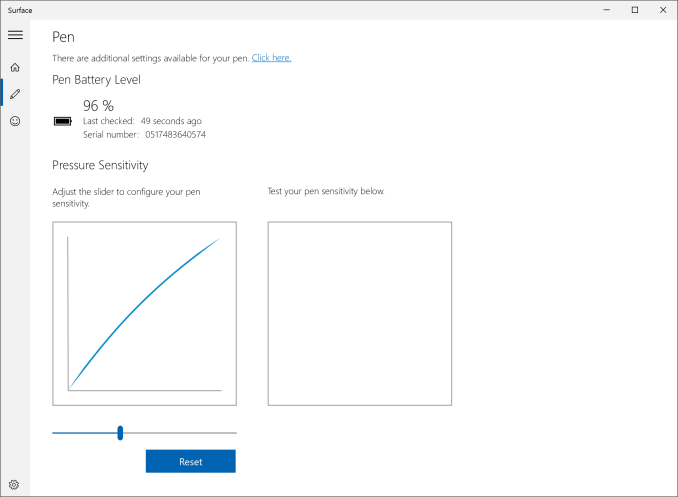 I have always enjoyed the Surface Pen, and especially the latest model which first shipped with the Surface Pro 4. Microsoft has really nailed the friction level between the pen and the display, and the pen has just the smallest amount of drag which makes it feel like you really are writing with a real device, and not just sliding across the screen like on the older models. There is an eraser on the top, which also houses a button you can configure to do different tasks based on a single click, double click or click and hold. 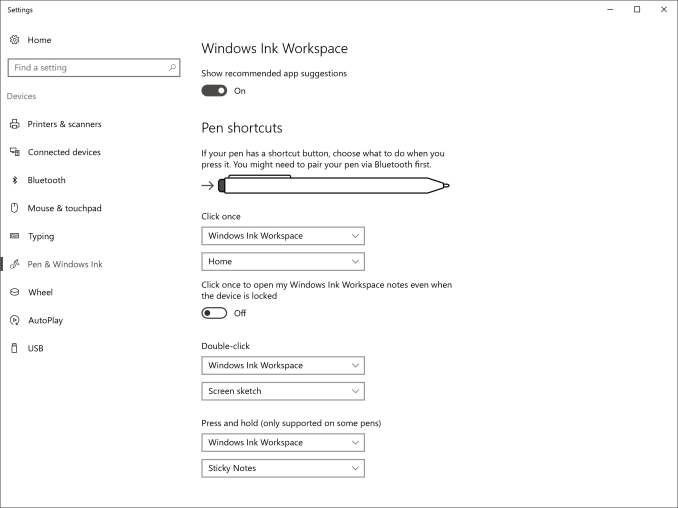 Some of the issues with the pen, especially being able to draw extremely straight lines, have been fixed, not through a hardware change, but through software. The introduction of rulers built into Windows 10 may seem like a small thing, but they are incredibly useful when drawing, and it’s kind of crazy they didn’t exist from the start, but with the Windows 10 Anniversary Update, this software construct makes the hardware implementation even better. As someone who has actually tried to use a physical ruler on a tablet, having one built in that is much more flexible makes the experience even better. The pen continues to be a focus at the company, so hopefully they will improve the hardware as well as time goes on. Some digital artists love it, but others are still firmly in the Wacom camp. Wacom has been at this a long time, so it’s not a big surprise they have a technology advantage with precision, sensitivity, and features like tilt support.

That is it for accessories that come in the box. You get a keyboard, mouse, and pen, and all three are available to purchase on their own as well. Perhaps the most exciting accessory announced with the Surface Studio is the one that will cost an additional $99.99 on top of the already pricey Studio, and that is the Surface Dial. 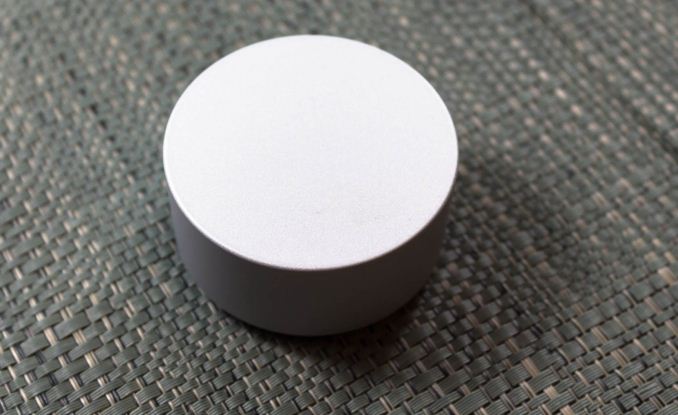 The Surface Dial is exactly what you would expect, and also so much more. It really epitomizes the collaboration of the Surface hardware team, and the Windows team, now that they all fall under the same group in the company. There are other features in the Surface Studio itself which demonstrate this as well, such as the ability to choose the color gamut in the Action Center, but having the Surface team develop a hardware accessory, and Windows not only supports it, but with a full API and customizability for developers, is really a great sign of the teams working together. 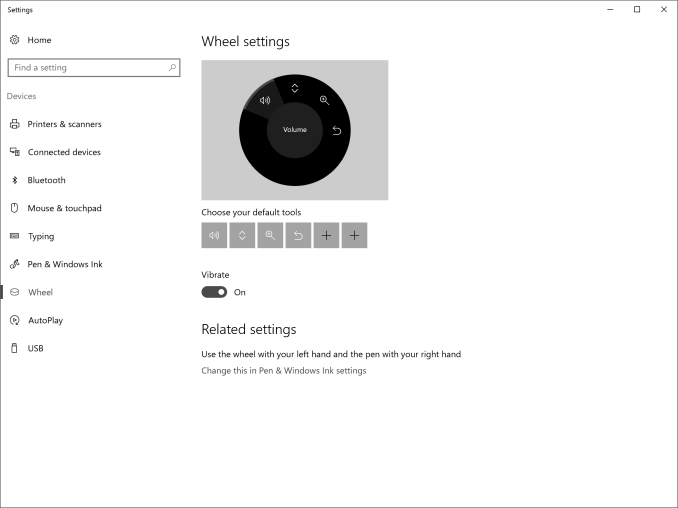 But let’s dig into the Dial. It connects over Bluetooth, just like all of the Studio accessories, and it can be used on any Windows 10 PC since the APIs and functionality is built right into the operating system. The difference on the Surface Studio is that it can detect the Surface Dial right on the display itself, allowing it to be used directly on a project, allowing for a more immersive experience. Microsoft looked at the experience of pen input, and designed a peripheral which works with the off-hand, which is normally doing nothing. Most people would use the pen with the same hand as they would use the mouse, and their non-dominant hand ends up not being utilized. The Surface Dial solves this problem, and with proper software support it can add a lot of functionality and usability to the drawing experience. It is important to note though that almost none of this requires the Surface Studio, since all the same functionality would be available off the screen. Using it on the screen is a bit more immersive, but that is it. 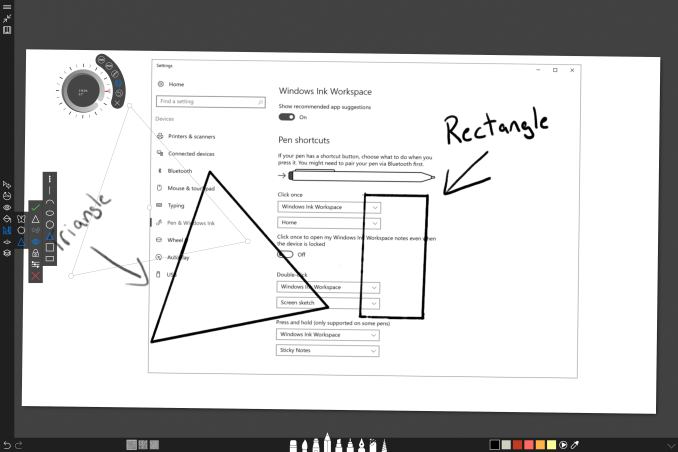 It's a simple device, with just a rotating dial with haptic feedback, and it can be clicked. It sounds almost too simple, but it can really expand what you can do. You can quickly use it to zoom or rotate. You can use it to set the color, or even adjust the color as you are using the pen. If you are using it just in Windows, you can use it to scroll or set the volume. Since the API is available for developers, it will be interesting to see how it is supported over time in professional apps. At the moment, it is supported in a handful of apps like Sketchable and Drawboard PDF with full support, and also works in almost any app as a scroll wheel and more. It is early days for the Dial, but it could easily become a powerful tool over time. Already at CES just a few weeks ago, Dell already showed off their own version of it. Simplicity is the key, and with just a clickable wheel, it’s surprising just how much you can already do with it through turns, clicks, or click and holds. It’s even made out of aluminum, so it feels great in the hand. 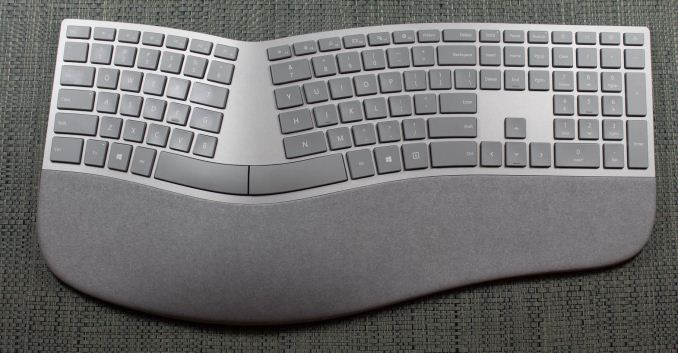 The final accessory announced at the Studio launch was a second keyboard. The Surface Ergonomic Keyboard is the latest ergonomic model available from Microsoft, who has been building ergonomic keyboards for what seems like forever. I switched to an ergonomic Microsoft keyboard well over a decade ago, and I find them much more comfortable to work with. The latest Surface Ergonomic Keyboard slightly changes the design from the most recent model in the Sculpt Ergonomic Keyboard, with the major change being adding the number pad back onto the keyboard rather than have it as a separate component. I prefer this, but there are people who are cramped for space that may prefer the Sculpt design.

The new keyboard features the same gray coloring as the Studio, although it’s made from plastic rather than the aluminum of the Studio, which is a disappointment only because of the cost of the keyboard at $129.99. As with the normal keyboard, it features laptop style keys, but they feel great to use if you like a short throw. It would be great to see backlighting on this keyboard as well, but that is also absent. The keyboard does feature an Alcantara wrist rest, which feels great to use.

Anyone used to Microsoft’s ergonomic keyboards will prefer this model, but as already said, it doesn’t come cheap.