During its presentation, Qualcomm highlighted six key areas of focus for Snapdragon 835: battery life, connectivity, security, photo and video, VR and AR, and machine learning. The common thread that ties all of these together is heterogeneous compute, which is deeply woven into the 835’s hardware design.

Power consumption and heat production are the primary constraints for any smartphone or mobile device activity, especially for the advanced workloads mentioned above. Despite promises of better performance, Qualcomm says Snapdragon 835 uses less power overall than Snapdragon 820. The shift to a 10nm FinFET process certainly helps, as does the shift in architecture for the Kryo 280 CPU. Qualcomm paid special attention to reducing the efficiency cluster’s power consumption, because, according to the company, the CPU spends up to 80% of its time running tasks on the lower-power cores. Optimizations to other areas, like the GPU, also help reduce power consumption in specific situations, and updates to Symphony System Manager give it finer grained control over voltage and frequency scaling. 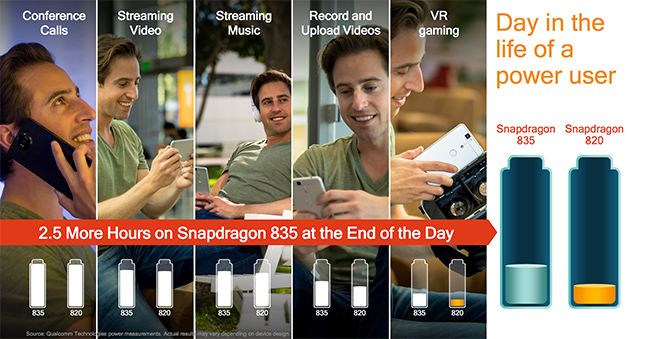 Qualcomm says Snapdragon 835 consumes 25% less power than Snapdragon 820 and 50% less than Snapdragon 801, but that’s for an unspecified workload. In a phone with a QHD display and 3000mAh battery, the 835 should provide 3+ hours of continuous 4K video encoding and 2+ hours of VR gaming. The 835 also supports Qualcomm’s Quick Charge 4 fast-charging technology that promises up to 20% faster charging and 30% higher efficiency than the previous generation Quick Charge 3.

Snapdragon 835 includes an integrated X16 LTE modem that delivers up to 1Gbps (Category 16) on the downlink using 3x20MHz carrier aggregation and 256-QAM modulation. The higher downlink speed is achieved by using 4x4 MIMO on two aggregated carriers plus 2x2 MIMO on the third carrier to create 10 unique data streams. It also delivers up to 150Mbps (Category 13) on the uplink using 2x20MHz carrier aggregation and 64-QAM. 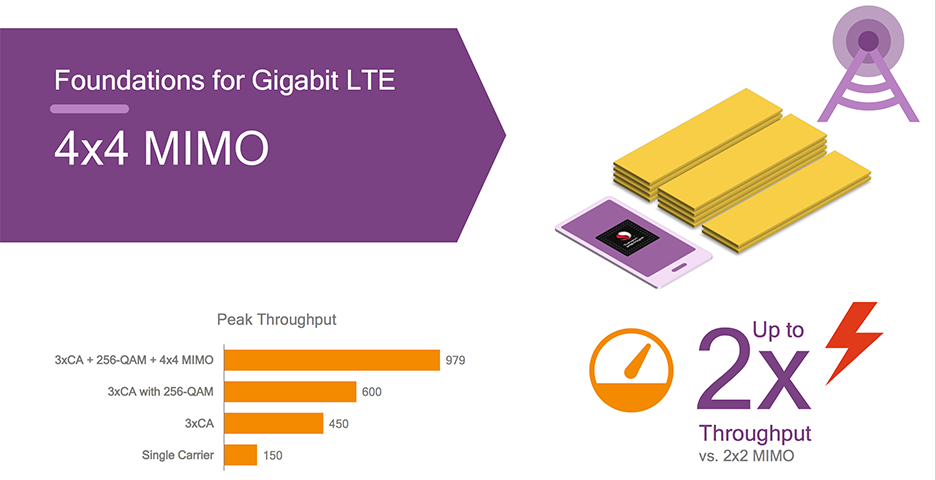 As the industry continues down the path towards 5G, Qualcomm sees gigabit-class LTE as an important bridge, providing higher bandwidth coverage over a wider area while operators work to bring short-range, millimeter-wave 5G networks online. To make this work, phones using Snapdragon 835 will need 4 cellular antennas (plus additional antennas for Wi-Fi, Bluetooth, NFC, etc., resulting in phones with 7-10 antennas). Due to limited space, OEMs will likely use smaller antennas for higher frequencies, limiting 4x4 MIMO to the mid and high bands between about 1.8GHz and 2.6GHz, while the lower bands use 2x2 MIMO. Carrier support for gigabit LTE is not widespread at this point (Qualcomm says carriers should begin rolling out network support in 2017), so it will be interesting to see which OEMs that use Snapdragon 835 actually include 4 antennas. Even if a network does not support 4x4 MIMO, the phone can still take advantage of 4-way receive diversity, like Samsung’s Galaxy S7, to improve signal strength.

Snapdragon 835 also supports 802.11ac Wi-Fi with 2x2 MU-MIMO, Bluetooth 5, and FM radio when paired with the WCN3990 companion chip. This is the first certified Bluetooth 5 solution, offering up to 2Mbps of bandwidth, which is twice that of BT 4.2, or up to 4x the range of BT 4.2. Other advantages include a 60% reduction in Wi-Fi power consumption relative to Snapdragon 820, and the ability for LTE/LAA/Wi-Fi to share antennas, reducing the total number of antennas in a phone by up to three. There’s also support for 802.11ad Wi-Fi at up to 4.6Gbps, although this remains a discrete solution that requires an additional companion chip. 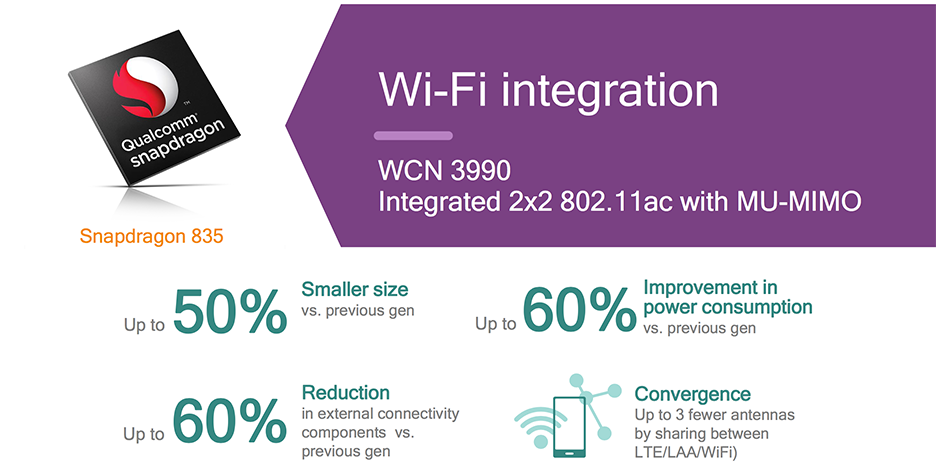 Smartphone OEMs are always looking for ways to differentiate their products. Several years back software was the focus; then it was bigger, higher resolution screens; then materials and design; and now it’s the camera. In 2016 we saw several flagship phones incorporate dual rear cameras, a trend that will continue to gain momentum this year.

Snapdragon 835’s Spectra 180 ISP, which supports dual 16MP cameras, gives OEMs the ability to use two lenses with different magnification ratios, like the iPhone 7’s wide-angle and 56mm lenses or the G5’s wide-angle and fisheye lenses, and use its “Smooth Zoom” feature to switch between them. OEMs can also use Qualcomm’s Clear Sight algorithm to combine the output from two different camera sensors. The first sensor captures color data using an RGB Bayer color filter array, but the second black and white sensor, which is used to gather luminance data, does not, allowing it to capture significantly more light. This technique promises to produce a brighter image with better contrast and less noise than one taken with a single color sensor.

Snapdragon 835 continues to support Google’s Halide language for hardware accelerated image processing using the Hexagon 682 DSP. Google took advantage of this feature in Snapdragon 820 to enhance image quality when using the Pixel’s HDR+ camera mode. The 835’s DSP can also be used for face detection and recognition when using the camera. OEMs can use this to enhance autofocus performance by quickly locking onto faces or to apply beautification algorithms. 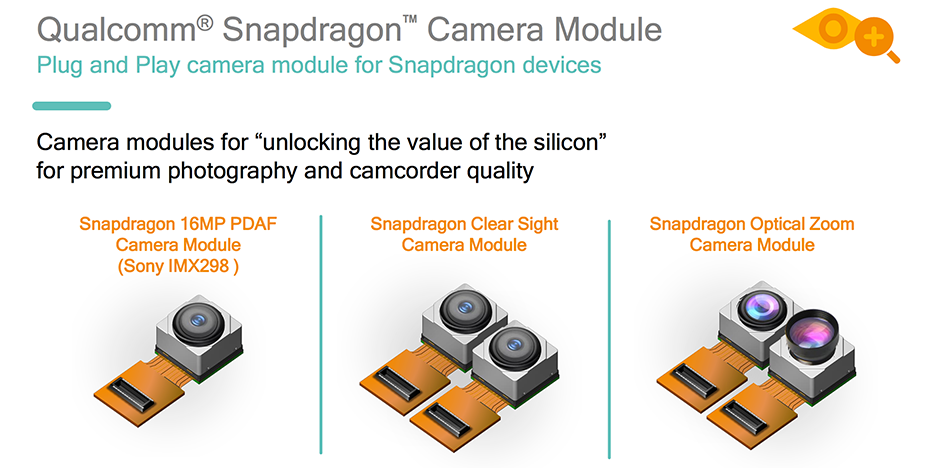 Because many of these advanced imaging features require significant hardware and software development, Qualcomm is introducing its Snapdragon Camera Modules. These prefabricated, integrated hardware/software modules are already tuned and ready to use, giving OEMs faster time to market—and more incentive to implement new features—by significantly reducing the engineering effort. There are three modules currently available, including a single camera with PDAF and two dual-camera configurations covering both options discussed above.

Snapdragon 835 includes new video capture and playback capabilities too. The 835’s VPU and DPU can now decode and display 4K Ultra HD premium (HDR10) video. The DPU is capable of outputting 2160p60 video with 10-bit color to a wide color gamut 10-bit internal or external display, although we have not seen any 10-bit panels for mobile devices yet. The DPU also supports Q-Sync, which allows a Q-Sync capable display to refresh as quickly as the GPU can render frames. 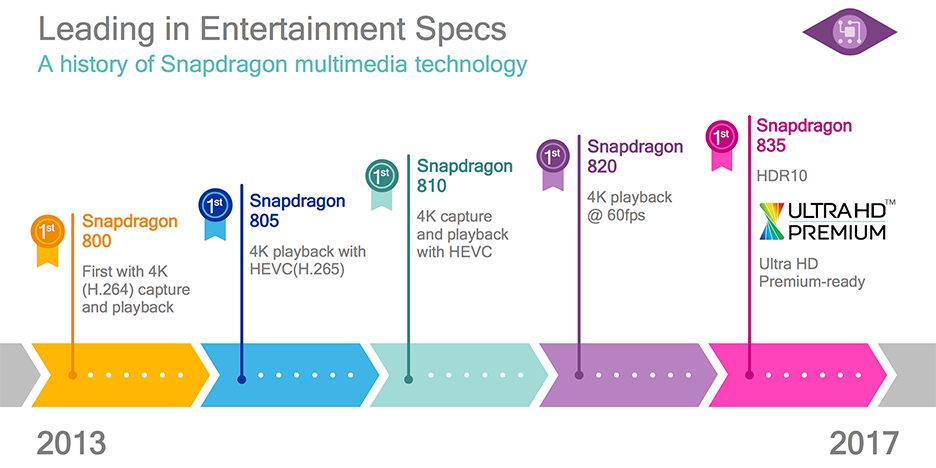 Qualcomm continues its push into virtual and augmented reality with Snapdragon 835, targeting both dedicated HMDs and smartphones with Google Daydream support. VR’s combination of high-resolution 3D visuals, positional audio, spatial tracking, and gesture recognition place a significant burden on an SoC, requiring good performance and tight coordination between each onboard processor. One of the many challenges in creating a believable virtual environment is motion to photon latency. Qualcomm says Snapdragon 835’s latency is 15ms, down from 18ms for Snapdragon 820, reducing the lag between head and scene movement that can cause motion sickness. 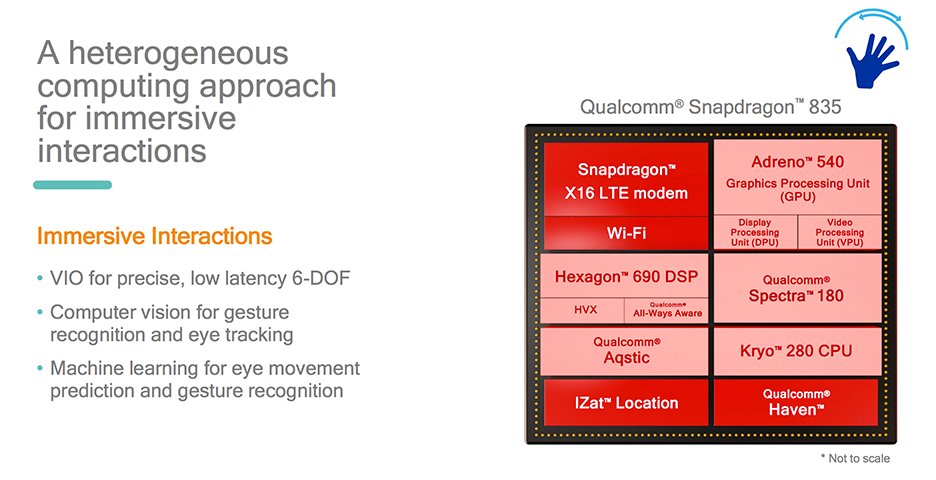 Qualcomm’s Visual Inertial Odometry (VIO) system for head motion tracking uses the Hexagon 682 DSP to process streaming video from a camera at ~30 fps and the All-Ways Aware DSP to capture accelerometer and gyroscope data at 800Hz or 1000Hz. It then combines this data to determine position and orientation in 6 degrees of freedom. Qualcomm says using the DSPs for this function is almost 4x more power efficient than using the CPU. 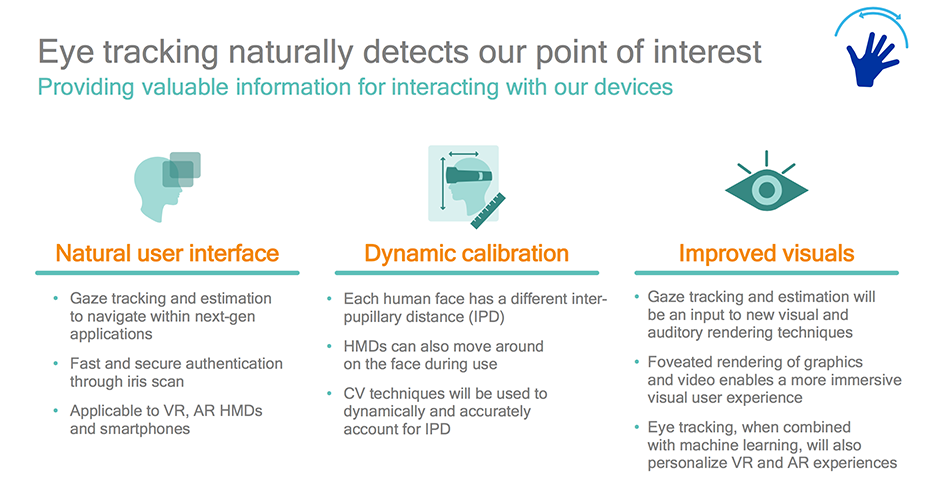 Qualcomm sees computer vision as another key component of VR and AR. Eye tracking aids foveated rendering, where objects centered in your field of view are rendered more sharply, and could provide another way to interact with a user interface. Gesture recognition allows you to interact with virtual objects without the need for physical controllers or accessories. The computer vision data from the DSP could also be an input to the GPU for rendering virtual hands, improving immersion within the virtual world. 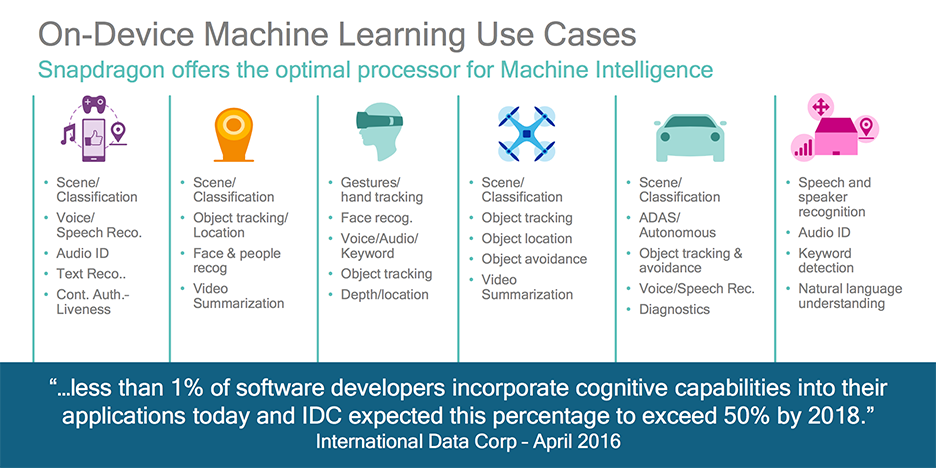 Qualcomm remains focused on using heterogeneous compute to enable new experiences, such as VR/AR, intelligent assistants, and advanced imaging. Snapdragon 835 is a logical extension of the 820 in this regard but does offer several improvements. The move to 10nm FinFET, a new CPU architecture, and tweaks to the other processors should result in a higher-performing and more power efficient SoC, but we’ll need to verify those claims with our own testing. Other notable additions include the X16 LTE gigabit-class modem and support for 4K Ultra HD premium video display.

Snapdragon 835 is in production now and will begin shipping in commercial products in the first half (or probably quarter) of 2017.