Much like with the cheaper gaming-focused GA-Z170X-Ultra Gaming, the core selling features of the GA-Z170X-Designare are its Thunderbolt 3 support and U.2 port. With the exception that the GA-Z170X-Designare actually lacks any 3.1 Type-A ports on the rear panel, there is no particular difference between the two boards as far as these two features as concerned. The main differences between the two boards are aesthetic improvements, dual LAN support and higher rated ICs. 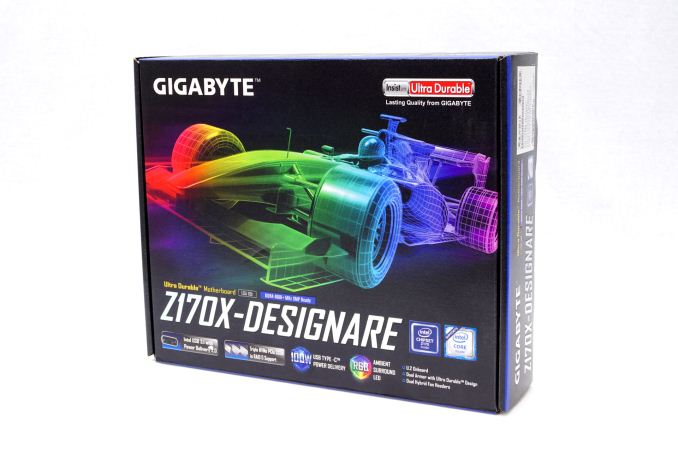 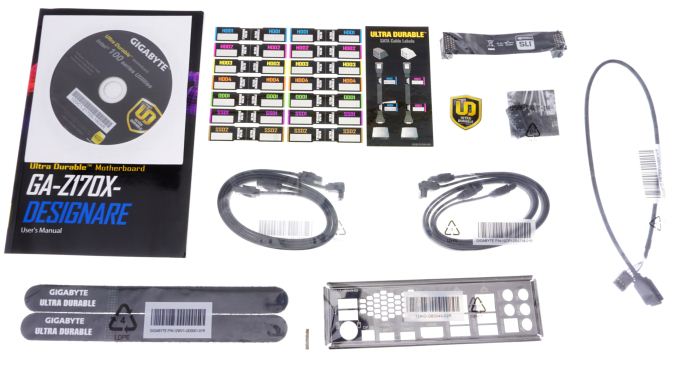 The bundle of the GA-Z170X-Designare is virtually identical with that of the GA-Z170X-Ultra Gaming, with the sole exception being that the door notice is missing and an LED strip cable is now present. There are four SATA cables included, which should be adequate for most users. Yet, considering the price range of the motherboard, one might have hoped for a key bundle item, such as an active Type-C or Thunderbolt 3 cable when considering that the motherboards lacks a USB 3.1 Type-A port.

GIGABYTE's design team made a real effort trying to make the GA-Z170X-Designare aesthetically appealing, much as if the primary target group of the motherboard are advanced modders and not professionals. The motherboard has RGB LEDs installed, lighting the yellowish stripes that can be seen across its sides and, in extend, subtly illuminating the system area around it. These LEDs are controllable via software, with a header for the connection of extra (optional) LED strips. The black heatsinks now have white/blue geometrical designs on them and, alongside with the silver PCIe/DIMM slot shielding, they are breaking the plainness of the all-black theme. The metal braces that form the shields of the PCIe and DIMM slots also have a functional purpose and that is enhancing the mechanical strength of the motherboard, preventing wrapping and damage due to excessive force, weight, or the combination of the two. It can be highly practical for users who transport their system or change cards/DIMMs often. An extra metallic shield covers the area of the motherboard where the audio codec is at, reducing interference. 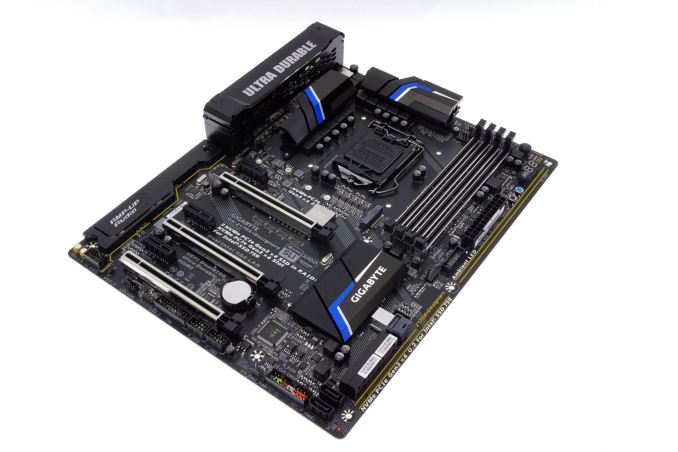 While it initially seems very similar with the cheaper GA-Z170X-Ultra Gaming, the GA-Z170X-Designare does have quite a few differences. It is still built on a six-layer PCB, and again there is no mention regarding thicker 2 oz copper layers like those implemented on some of their Ultra Durable series motherboards, even though the Ultra Durable branding does appear on the I/O shield of this board. Long-term reliability measures are provided through the use of anti-sulfur resistors, quality solid-state capacitors by Fujitsu, ESD LAN and USB protection and metallic braces increasing the mechanical strength of the DIMM/PCIe slots. GIGABYTE actively advertises the GA-Z170X-Designare as being a compatible solution for professional graphics cards, like the NVIDIA QUADRO series, but there really is not any special feature on the motherboard that would in any way improve compatibility or functionality with these cards over any Z170-based compatible motherboard, other than additional QVL testing. 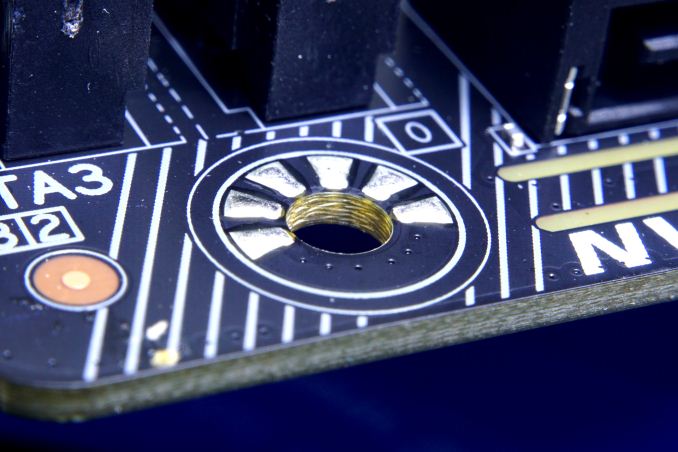 The layout of the GA-Z170X-Designare is well thought out. The designer moved nearly all of the onboard headers to the bottom of the motherboard, where they will be easily accessible from and will not interfere with any installed devices. The space between the two primary PCIe 16x has been expanded, allowing for better cooling when two cards have been installed. There is one PCIe 4x M.2 slot between the top PCIe slot and the CPU socket, offering support to one M.2 device up to 110 mm long (22110 type). Between the CPU socket and the DIMM slots, we can see two fan headers, one for the CPU fan and one for the liquid cooling pump. This combination is especially useful for users that will install liquid cooling systems with an extra fan that provides airflow around the socket area. The three system fan headers are found to the right of the DIMM slots, the center left side of the motherboard and to the bottom right of the motherboard. 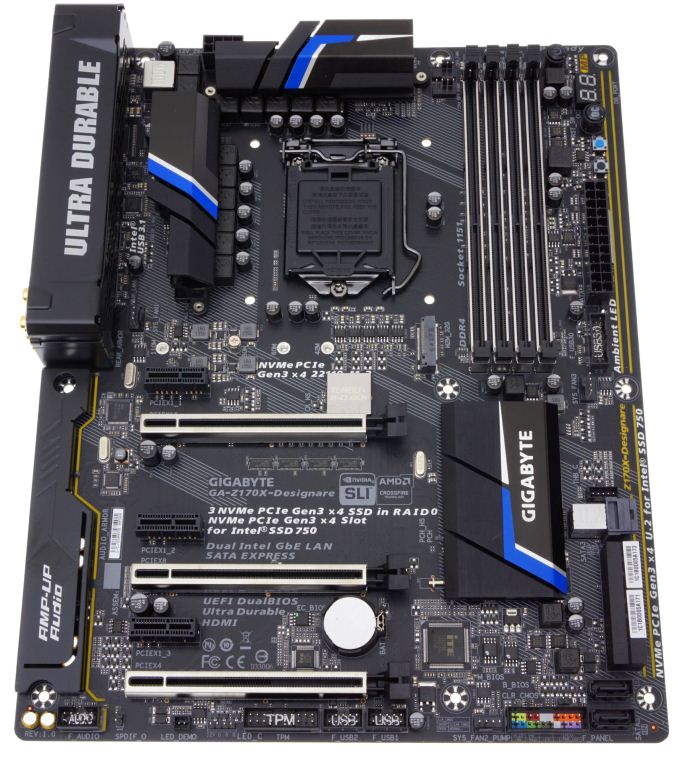 At the rear panel of the GA-Z170X-Designare we have a PS/2 port, two USB 2.0/1.1 ports, two Thunderbolt 3/Type-C ports, one Mini DisplayPort In, a DisplayPort 1.2 out, a HDMI 1.4 port, four USB 3.0 ports, two LAN cable connectors, five gold-plated 3.5 mm audio jacks and one optical audio cable insert. There are two major oversights that we can identify here, with the first one being the use of a HDMI 1.4 connector. While that was not a major issue with its gaming-oriented sibling, supporting decent refresh rates on 4K resolution monitors and TVs can become an issue with a professional system in mind, plus the price range of the GA-Z170X-Designare does not really justify such an omission.  The second is the omission of a COM port or header on a motherboard that is being targeted towards designers and engineers. Myriads of laboratory devices and instrumentation still require a COM port and a few do not really play well with USB adapters either. 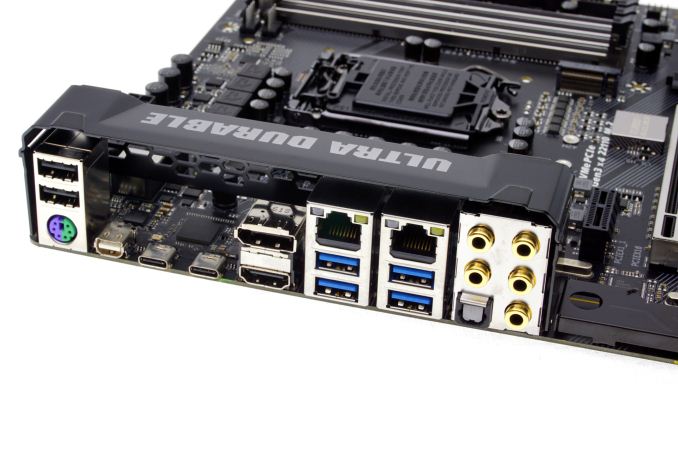 When we removed the heatsinks of the motherboard, we once again found out that the chipset heatsink makes poor contact with the chipset core. It does not have high cooling requirements and the current application should be more than adequate for most users, but serious overclockers will certainly be wanting to do something about it. 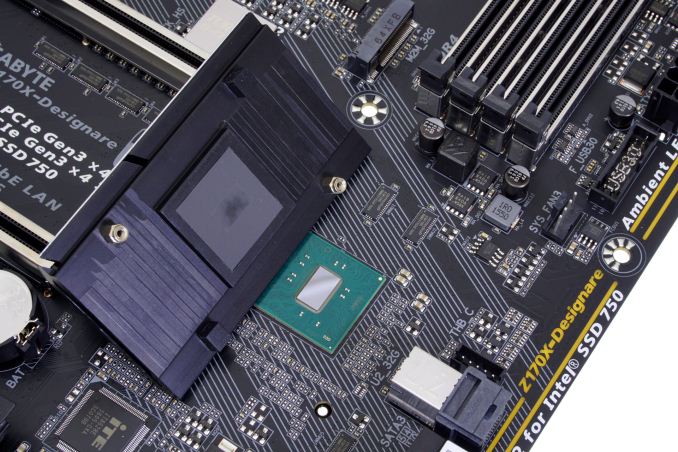 The CPU power delivery circuit on the GA-Z170X-Designare primarily consists of a Intersil 95856 primary controller driving a combination of Vishay SIRA18 and SIRA12 MOSFETs, but there are several secondary 5AZ (Intersil 6625A) drivers supporting it. The combination of controllers is driving a 3-phase rail for the Graphics and a 4-phase rail (8-phase virtual) for the Core. Considering the low power requirements of 1151 CPUs, these are capable of providing more power than such a processor could ever require. A two-phase circuit using Vishay SIRA12 MOSFETs powers the RAM modules. Near the I/O panel we can see the Intel's DSL6540 (formerly known as Alpine Ridge) Thunderbolt 3 controller, two Intel network controllers (I219V + I211AT), the TPS65982 USB Type-C power delivery controller and the NXP PTN3360DBS HDMI/DVI level shifter. The Realtek ALC1150 can be seen once the metallic shielding has been removed, in between a few audio-specific capacitors. An ITE IT8628E provides onboard monitoring is supported by an IT8792E, supposedly offering better overclocking and thermal controls. Numerous Asmedia ASM1480 multiplexer chips can be found thorough the board for the PCIe lanes. 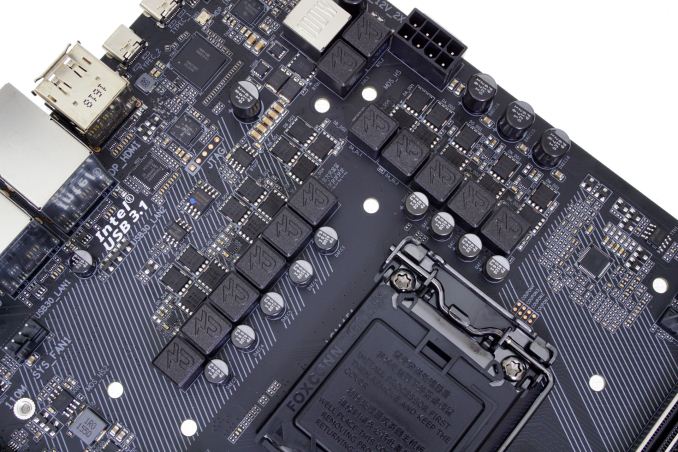