We've mentioned before that Intel has no intentions of significantly ramping up the clock speed of their Pentium 4 processor until the second half of this year when they introduce the first 90nm Prescott core. The move to 90nm will provide for smaller, faster and cooler running transistors that will enable clock speeds of greater than 3.2GHz with relative ease (compared to on the current 130nm core), but until that time comes Intel is relying on improvements on the platform side of things to keep performance competitive.

Today we've seen the launch of Intel's brand new flagship chipset - the 875P (previously known as Canterwood); alongside the 875P, Intel is introducing their newest flagship desktop processor - the Pentium 4 C. The C designates 800MHz FSB support, much like the B designated 533MHz FSB support in the early days of the first 533MHz FSB Pentium 4 processors.

Eventually the C designation will fade away, but we're stuck with it initially in order to remove any confusion when customers see two identically clocked processors with different FSB frequencies. You actually won't have to deal with that confusion for another several weeks, as the first and only 800MHz FSB Pentium 4 processor being released at this time doesn't overlap in clock speed with any other Pentium 4.

The first 800MHz FSB CPU from Intel is the Pentium 4 3.0C which, as you can probably guess, runs at an even 3GHz - just 66MHz shy of the previous champ. There will be other 800MHz FSB processors to come, both lower and higher clocked than today's 3.0C, but for now this is all Intel is introducing. 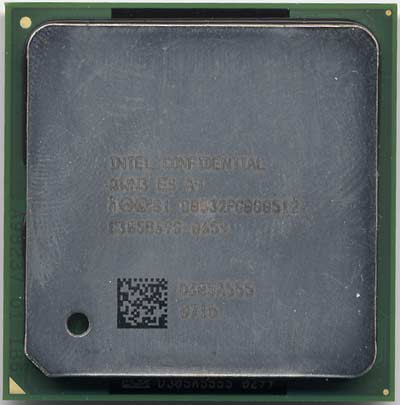 Other than 800MHz FSB support, these new C processors will feature Hyper Threading (HT) and sell for a slight premium ($20 - $40) over other non-HT Pentium 4's courtesy of the improved performance provided by HT.

We've already provided quite a bit of information on the platform that Intel is launching with the Pentium 4 3.0C, so be sure to read our 875P review to get the details before continuing with this review.