The Plextor M8Pe cannot keep up with Samsung's 960 Pro, but otherwise it is a solid contender in the PCIe SSD space. Its overall performance is near the Samsung 960 EVO and the Toshiba OCZ RD400. All of them offer better real-world performance than Intel's SSD 750, showing that the PCIe SSD market has progressed and expanded greatly since that first consumer NVMe SSD. This level of performance now represents the middle range of the PCIe SSD market, where the Intel SSD 750 was a very exclusive top of the line product. 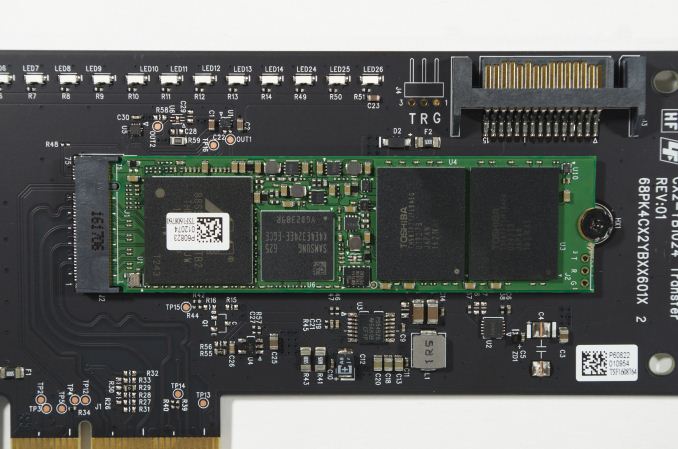 The M8Pe has once again shown that M.2 PCIe SSDs walk a fine line with with their power and temperature management. Comparing the M8Pe with and without its heatsink shows large performance differences on many of our long-running synthetic benchmarks, but minimal differences on our AnandTech Storage Bench tests that replicate real-world I/O patterns. Even though the M8Pe uses more power than most of its M.2 PCIe competitors, a heatsink is still not necessary for ordinary use. This is the same conclusion we came to with the Samsung 950 Pro and the Toshiba OCZ RD400. For users with unusually heavy storage workloads or with a concern for the aesthetics of their SSDs, Plextor offers two different cooling options: the M8PeY LED-lit add-in card with a substantial heatsink over the drive, or the similarly styled heatspreader on the M8PeG variant.

The performance differences between the Plextor M8Pe and the Toshiba OCZ RD400 are small enough that it will usually make sense to get whichever is cheaper at the moment. The RD400 does seem to have better write speeds while the M8Pe has better read speeds, but this adds up to only a slight advantage for the RD400 on our more realistic AnandTech Storage Bench tests. The RD400 also has lower power consumption than the M8Pe, which makes it less susceptible to thermal throttling during sustained loads.

The one big surprise from the Plextor M8Pe was its steady-state random write performance. With the heatsink it performed in the same league as the Intel SSD 750 and Samsung's 960 Pro and EVO. Even without the heatsink, it performed better than most consumer SSDs. Furthermore, when given the benefit of some extra spare area to work with, the M8Pe with a heatsink turned in the fastest steady-state random write speed we've measured on a consumer SSD. This shows that the Marvell 88SS1093 controller is quite capable of competing against Samsung's Polaris controller and even the enterprise-grade 18-channel monster from Intel. The Marvell controller can support 3D NAND, so we hope to soon see an even faster product using 3D MLC NAND. The steady-state performance of the M8Pe is also a credit to Plextor's custom firmware development, providing substantially higher performance and consistency than Toshiba delivered with the OCZ RD400 that uses the same NAND and a controller with comparable capabilities.

At the moment, Samsung's 960 Pro and EVO are still only available as pre-orders, and several other PCIe SSDs have limited availability. This makes price comparisons tricky, but the general trend seems to be that the Plextor M8PeGN is slightly cheaper than the Toshiba OCZ RD400. This also puts it right around the MSRP for the Samsung 960 EVO. When it becomes available and assuming prices don't shift dramatically, the 960 EVO will be the clear pick out of those three models at the 1TB capacity point: Samsung's SLC caching implementation is top notch and the 1TB 960 EVO has plenty of room to handle typical write loads. At smaller capacities, RD400 and M8Pe will have the performance advantage, especially for heavier workloads.

The big question for most users will be whether any of these PCIe SSDs are worth the price premium they carry over SATA SSDs. As compared to the Samsung 850 Pro, the M8Pe is at least 66% faster on each of our AnandTech Storage Bench tests. With the 850 Pro pricing around 42¢/GB, the PCIe SSD offers quite a bit more performance for the money. The comparison against more mainstream SATA SSDs like the 850 EVO is not as easy. At about 33¢/GB, the 850 EVO is just over half the price and the M8Pe can't always deliver twice the performance. It's even less often that the performance of the M8Pe would feel twice as fast, since it's hard to improve on something that already feels instantaneous. Ultimately, the SSD market has broadened to the point that there's nothing close to a one size fits all recommendation, but for now the Plextor M8Pe is one of several reasonable high-end options.