Although the rest of their Spring line (sounds almost too fashionable to be computer hardware, no?) is built on TSMC's 0.13-micron process, NVIDIA went with the more mature 0.15-micron process for their entry-level part - the NV34.

Remember from our explanation of the codenames in the intro, the NV34 is the successor to the GeForce4 MX but unlike the MX, it is not an overly castrated version of its older siblings. In fact, the architecture of the NV34 is, according to NVIDIA, virtually identical to the NV31; the only official differences being the memory controller and clock speeds.

The NV34 128-bit memory controller is devoid of any of the NV30/31's compression algorithms, mostly to keep die size down on the larger 0.15-micron process. The NV34 is aimed at the mass market, and thus must be as cheap to manufacture as possible. Featuring only 47 million transistors (compared to NV31's 75 million), the NV34 is missing more than just the NV31's compression engine. Because the NV31 is geared for higher clock speeds its pipelines, although functionally equivalent to the NV34's, do have extra stages to help gear the part for higher clocks. Around 15 - 20% of the NV31's die is reserved for the compression engines, with the remaining 10 - 20% of the die difference being reserved for those extra pipeline stages. The combination of the two aforementioned differences make up the vast majority of the 28 million transistor difference between the NV31 & 34.

Obviously on a 0.15-micron process, the NV34 can't reach as high clocks as the NV31, which is why it shouldn't be a surprise that one of its first incarnations - the GeForce FX 5200 Ultra will be shipping at a 325MHz core clock. This 325MHz core clock is still quite high, you'll note that it is higher than the GeForce4 Ti 4600 built on the same 0.15-micron process. The difference is that the 5200 Ultra's NV34 GPU is slightly less complicated than the GeForce4 and thus can run at higher speeds without producing as much heat and adversely impacting the overall manufacturing yield of the GPUs.

The GeForce FX 5200 Ultra features a 325MHz DDR memory clock, and although it's only 7% lower than the 5600 Ultra, the performance will be significantly less because of the lack of any compression engine. 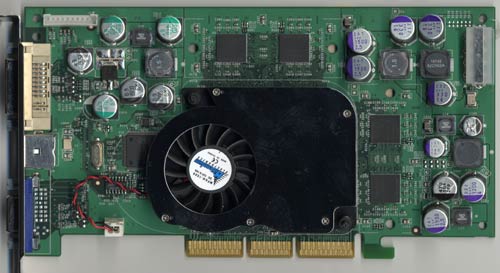 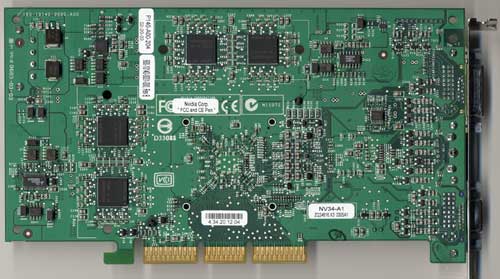 The 5200 Ultra will retail for $149 and at that price, it will deliver the exact same feature set as the GeForce FX 5800 Ultra - mainly DirectX 9 compliance. There will be a regular GeForce FX 5200 that will sell for under $100, also with the same feature as the 5200 Ultra, 5600 Ultra and 5800 Ultra cards. NVIDIA wasn't kidding when they said that they would bring DirectX 9 support to their entire line of GPUs, and they have delivered.

ATI has no competition to the 5200 series, simply because their Radeon 9200/9100/9000 do not offer DirectX 9 support, they are based on a DirectX 8 class of GPUs. Granted that there won't be any use of DirectX 9 specific features in games for quite a while, but the tables have definitely turned; ATI is now the one that isn't delivering all of the features possible to the entry-level, and NVIDIA is clearly learning from their own past mistakes.