The NV31 is a 0.13-micron GPU, and as we mentioned earlier, is a direct descendent of the NV30. The GPU itself can render a maximum of four pixels per clock (four single textured pixels, or two dual textured pixels), making it effectively half of a NV30. This is reflected in its transistor count, which is 60% of the NV30 and still greater than the GeForce4 (125M vs. 75M vs. 57M). Since NV31 is feature-identical to the NV30, it is fully DirectX 9 compliant, meaning anything you can run on NV30 you can also run on NV31 (and NV34 for that matter). This is the beauty of NVIDIA's more componentized design process, and you'll see its benefits even more as we look at the NV34. For an idea of the features supported by NV31/34, be sure to read our GeForce FX Technology Preview.

The NV31 also retains the GeForce FX's 128-bit memory interface, although only with DDR-I support; thus memory clocks will not be as high as what we're used to seeing on the FX. The other downside to not supporting DDR-II is that memory power consumption is going to be higher on NV31 boards, but with the GPU's 80 million transistors already eating up quite a bit of power, the dent that DDR-I puts in the board's power envelope compared to DDR-II isn't significant.

NVIDIA's Color & Z Compression algorithms have also been improved on the NV31, once again, not as improved as what we'll see with NV35 but definitely superior to NV30.

The RAMDACs from NV30 also make their way down to the NV31, with dual 400MHz units finding their way onto the GPU. Unlike the NV30 however, the NV31 does have an integrated TMDS transmitter for DVI output. NVIDIA has historically left TMDS transmitters out of their highest end parts because of the difficulties in including such a high speed transmitter in a very noise-sensitive GPU; ATI is actually of a differing opinion and has no qualms about outfitting even their Radeon 9800 with an integrated TMDS.

The first incarnation of the NV31 GPU is the GeForce FX 5600 Ultra, which is shipping with a 350MHz core clock and 350MHz DDR memory clock. The GeForce FX 5600 Ultra thus has more memory bandwidth than a GeForce4 Ti 4600, and makes more efficient use of the bandwidth thanks to a much improved memory controller and color/Z compression. Although the 5600 Ultra has a higher core clock than the Ti 4600, it has a lower multitextured fill rate (the NV31 has four pipes with one texture unit per pipe vs. GeForce4's four pipes with two texture units per pipe) which will hurt performance significantly in situations that aren't overly memory bandwidth limited. 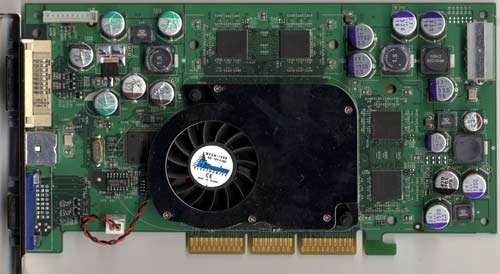 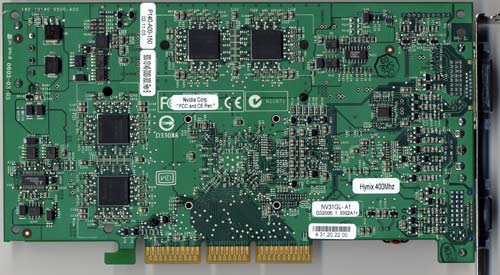 The 5600 Ultra will retail for $199 and will be competing directly with ATI's Radeon 9600. Remember that the Radeon 9600 will be similarly equipped (4 pipes, 1 texture per pipe), but will feature a higher core clock (400MHz) and a lower memory clock (300MHz DDR). Keep that in mind when you're looking through the benchmarks of the 5600 Ultra later on.