Intel provided a slide diagramming the enhancements to the Prescott core, which is what you'll find below: 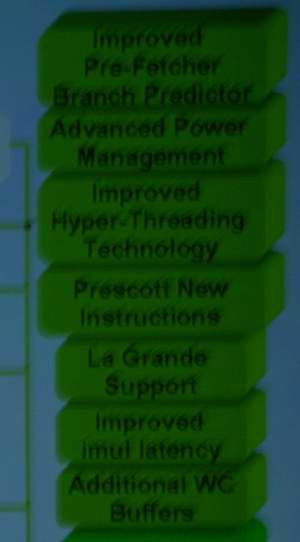 The Prescott core does feature an improved pre-fetching algorithm, which helps avoid extremely costly pipeline stalls that can wreak havoc on the deeply pipelined Pentium 4 core.

Intel did mention advanced power management with Prescott, but has yet to disclose exactly what they mean by that. We'll be touching on the improved HT and Prescott New Instructions in the next page, so we'll leave them out of discussion here. With Prescott, Intel will also be introducing LaGrande Support, which is something Intel has talked about at a very high level in the past as a hardware level security standard.

The Prescott core will also have reduced latency on integer multiplies, although we're not told exactly how much of an improvement at this point. And finally there are additional write combining buffers within the core itself.