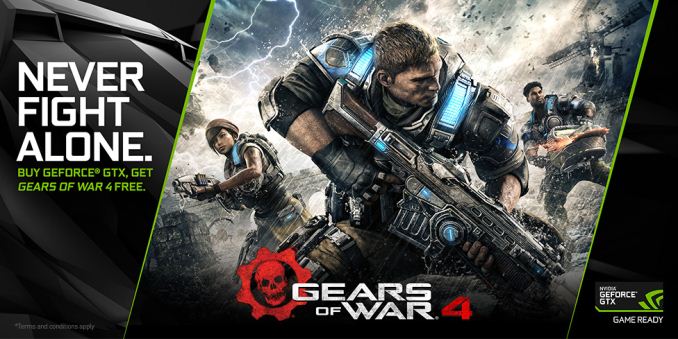 As we enter the AAA blockbuster season and leave the avalanche of GPU releases behind us, we are beginning to see the first game bundles approach. Those considering an upgrade, but perhaps not quite convinced thus far, may see an enticing offer sway them over in these coming months.

Kicking off this week is a new bundle for high-end cards that will see Microsoft's upcoming Gears of War 4 bundled with GeForce GTX 1070 and 1080 graphics cards, including notebook variations thereof. Interestingly, this title is one of Microsoft's first AAA "Xbox Play Anywhere" games, which means purchasing (or in this case, receiving) a game allows it to be played on either the PC or the Xbox One. Along these lines, the game is receiving a simultaneous launch on both platforms on October 11th, nearly 10 years after the original's Xbox 360 release.

Interesting features here will be cross-platform online campaign co-op, cross-platform online Horde mode gameplay and platform specific competitive multiplayer.  Of course it is worth noting the PC version provides enhanced graphics and supports 4K and 21:9 resolutions. Along with this we have the usual gamut of graphics options we’ve become accustomed to such as lighting, Anti-Aliasing, and texture settings with GeForce Experience available for those who don’t want to tinker.

It's worth noting that Microsoft's official "recommended" spec calls for either the GeForce GTX 1060 or the Radeon RX 480, which NVIDIA says is good for 1440p. Meanwhile for those gamers receiving the game as part of the GeForce bundle, the GTX 1080 meets Microsoft's "ideal" (4K) specification, and the GTX 1070 won't be far behind. Otherwise, as is usually the case, this bundle isn't being extended to the top-tier Titan X Pascal, nor is NVIDIA running any bundles with the GTX 1060 at this time.

This offer will run from now until October 30, 2016 or until supplies last. There are a couple of important notes to keep in mind though. This game is only available on Windows 10 Anniversary Update, hence customers will be able to redeem the code, but unable to view or download it on any previous version of Windows. Also, shoppers are encouraged to verify that a seller is participating in this bundle before buying, since NVIDIA cannot give codes to those that didn’t purchase from participating retailers/etailers.