Sadly, the CML174 does not have all of the neat space features found on the Samsung 172T. When we first opened the packaging our original impression was that this would be a no frills monitor. 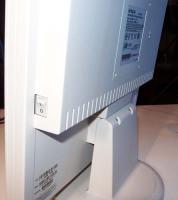 The most notable feature we see from the pictures inside includes an integrated DC converter.  This adds to the bulk of the monitor but clears a lot of clutter from already stressed workspaces.  The CML174 produces a slightly higher amount of heat emissions compared to the 172T and other monitors we have looked at, but the tradeoff seems to be worth it.  The fact that the CML174 has a slightly higher working power requirements may be due to the fact that the onboard DC converter may not be as efficient as the traditional “brick” unit found on the 172T.  We noticed similar phenomena on the Daewoo L700C which also had an integrated DC converter.  We should also note that the heat generated by the monitor emits primarily from the bulky rear panel rather than the sides of the bezel like the 172T.

Hitachi mounted the screen on a round plastic base, but the base does not swivel.  Unlike the Daewoo and Albatron LCD’s we looked at, the CML174 does not employ any sort of counter weighting on the base.  Since the DC circuitry resides on the monitor itself, the CML174 is a very top heavy display.  Even though the base provides a very sturdy platform, do not expect the easy free movement of the Albatron L17AT.

The CML174 tilts only 30 degrees, although this should be plenty for most users.  The CML174 is not nearly as flexible as the 172T, and unfortunately requires an additional arm to be wall mounted. 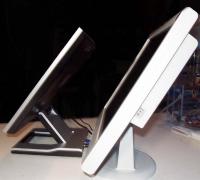