We mentioned before in our Daewoo LCD review that the LCD manufactures must have all gotten together and decided on silver as the color of the year.  Apparently ViewSonic did not want to let the LCD world down and thus put a dull silver finish over the bezel of the LCD.  Moving onto more important things about the monitor, we found ourselves with a plethora of unusual substance.

The major difference between this monitor and other LCD’s on the market right now is the unusual aspect ratio.  For whatever reason, ViewSonic chose a very unconventional path with the VG800 monitor when they decided upon a 4:5 aspect ratio as opposed to the near standard 3:4 ratio in currently available LCD’s on the market.  This is hardly a bad idea, since the native resolution of 1280 x 1024 matches a 4:5 aspect ratio.  Even though next generation LCD monitors are creeping toward 13:9 ratios, it is nice to see an LCD that supports the same aspect ratios of their CRT counterparts without distortion. 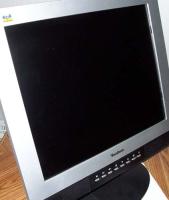 The major discrepancy we had with the monitor was its contrast ratio of 600:1.  To date, we have not seen an LCD with this high of a contrast ratio, so we were fairly skeptical when we saw this rating.  As many of you may know, contrast ratio is the judgment between the lightest light and darkest dark that the LCD can produce.  The unfortunate problem with contrast ratios is that everyone seems to judge them differently.  When looking at contrast ratios, it is also important to notice the brightness, which is measured in candela per sq meter. At 250cd/m2, the VG800 should be much brighter than the average CRT (with the exception of Samsung’s MagicBright series).  However, while comparing the VG800 against other LCD and CRT monitors in the lab, we found that the monitor appeared dimmer and seemed to have a lower contrast ratio than advertised. 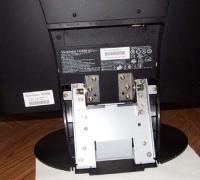 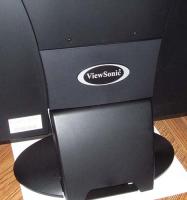 Further along the lines of the monitor brightness, we had several issues with the time it took the VG800 to start up.  When we turned the monitor on, or the monitor came off standby, there was sometimes up to a 2 minute delay before the LCD was able to shine its brightest.  Needless to say, this did not improve on our opinions of the monitor. 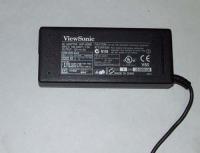 Our other impressions of the monitor were fairly average.  The monitor does incorporate a guard on the back for cabling to run down.  This keeps clutter to a minimum and really is a nice feature; however it cannot compete with the Samsung 172T which simply places the ports are the bottom rear of the unit.  The LCD itself has a large bezel, around 1.5” along the sides.  We do have to give ViewSonic credit for keeping the monitor depth down, the depth of the footprint was around 6.5” inches.