We have to check for ourselves of course, but IBM claims that compared to a dual K80 setup, a dual P100 gets a 2.07x speedup on the S822LC HPC. The same dual P100 on a fast Xeon with PCIe 3.0 only saw a 1.5x speedup. The benchmark used was a rather exotic Lattice QCD, or an approach to "solve quantum chromodynamics".

However, IBM reports that NVLink removes performance bottlenecks in

Those got our attention as, they are not some exotic niche HPC applications, but wide spread software components/frameworks used in both the HPC and data analytics world.

NVIDIA also claims that thanks to NVLink and the improved page migration engine capabilities, a new breed of GPU accelerated applications will be possible. The unified memory space (CUDA 6) introduced in Kepler was a huge step forward for the CUDA programmers: they no longer had to explicitly copy data from the CPU to the GPU. The Page Migration Engine would do that for them.

But the current system (Kepler and Maxwell) also had quite a few limitations. For example the memory space where the CPU and GPU are sharing data was limited to size of the GPU memory (typically 8-16 GB). The P100 now gets 49-bit virtual addressing, which means CUDA programs can thread every available RAM byte as one big virtual space. In the case of the newly launched S822LC, this means up to 1 TB of DRAM, and consequently 1 TB of memory space. Secondly, the whole virtual address space is coherent thanks to the new page fault mechanism: both the CPU and GPU can access the DRAM together. This requires OS support, and NVIDIA cooperated with the Linux community to make this happen.

NVLink, together with the beefy memory subsystem of the POWER8, ensures that CUDA applications using such a unified 1TB memory space can actually work well. 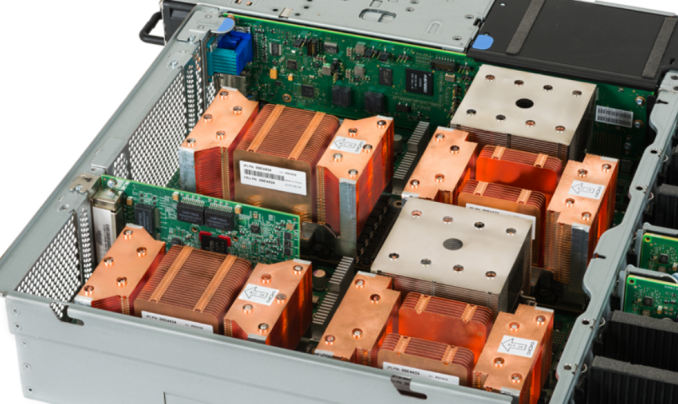 The POWER8 - al heatsinks - looks less hot headed now that it has the companion of 4 Tesla P100 GPUs...

Last but not least, note that once you add two or more GPUs which consume 300W each, the biggest disadvantage of the POWER8 almost literally melts away. The fact that each POWER8 CPU may consume 45-100W more than the high performance Xeons seems all of a sudden relative and not such a deal breaker anymore. Especially in the HPC world, where performance is more important than Watts.