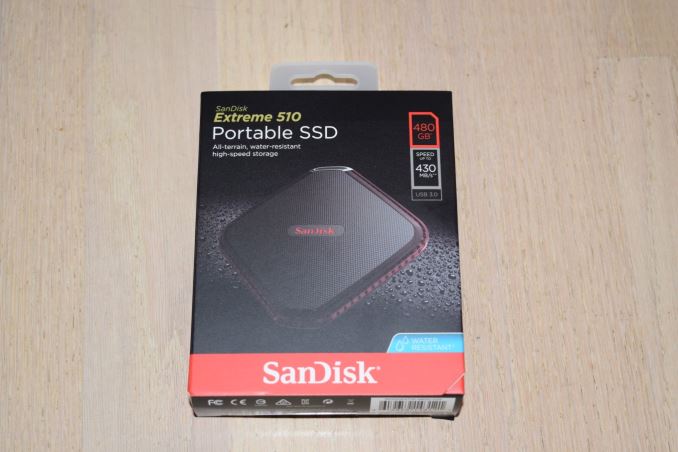 Rapid advancements in flash technology has coincided with the rise of USB 3.0 as an ubiquitous high-speed interface on computers. This has led to the appearance of small and affordable direct attached storage units with very high performance for day-to-day data transfer applications. We have already looked at many flash drives with SSD controllers and a USB 3.0 - SATA bridge over the last year.

SanDisk launched the Extreme 510 Portable SSD at the 2016 CES. In terms of external appearance, it looks very similar to the Extreme 500 Portable SSD that we reviewed late last year. The only differences lie in the fact that the Extreme 510 comes in only one capacity - 480GB. It also carries a IP55 rating (dust and water resistance), thanks to the rubber bumper around the unit. It is targeted towards content creators who want rugged high capacity storage in the field.

Unlike the Extreme 500 240GB sample (which was based on the SSD PLUS series with a Silicon Motion controller), the Extreme 510 480GB version is based on the Ultra II. The 480GB Ultra II sports the Marvell Renoir 88SS9189 SSD controller with SanDisk's 2nd Gen 128Gbit 19nm TLC NAND. 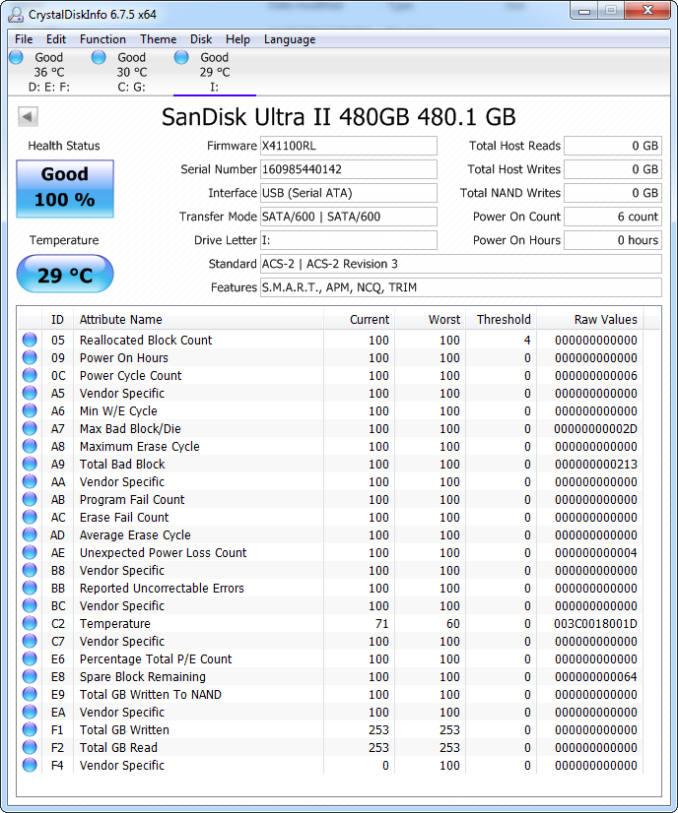 Disassembling the unit was quite similar to the process we adopted for the Extreme 500. The striking difference is the special coating for the PCB and the chips on the board. This makes the chip markings quite difficult to read. This coating does seem to affect the thermal situation, as we shall see further down in this review.

Evaluation of DAS units on Windows is done with the testbed outlined in the table below. For devices with a USB 3.0 (via a Type-A interface) connection (such as the SanDisk Extreme 510 480GB that we are considering today), we utilize the USB 3.1 Type-C port enabled by the Intel Alpine Ridge controller (along with a Type-C male to Type-A female cable). The Alpine Ridge controller connects to the Z170 PCH via a PCIe 3.0 x4 link..

SanDisk claims speeds of up to 430 MBps, and these are backed up by the ATTO benchmarks provided below. Unfortunately, these access traces are not very common in real-life scenarios. 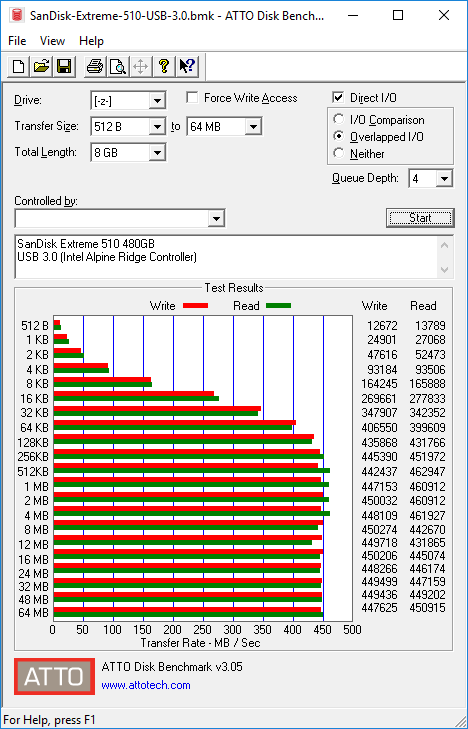 CrystalDiskMark, despite being a canned benchmark, provides a better estimate of the performance range with a selected set of numbers. As evident from the screenshot below, the performance can dip to as low as 20 MBps for 4K random reads. 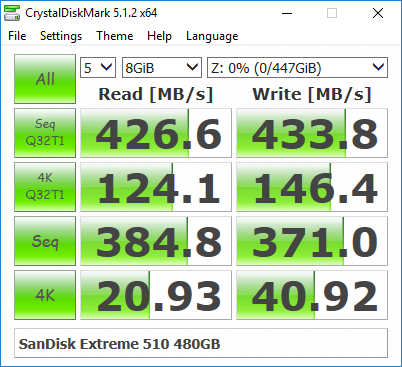 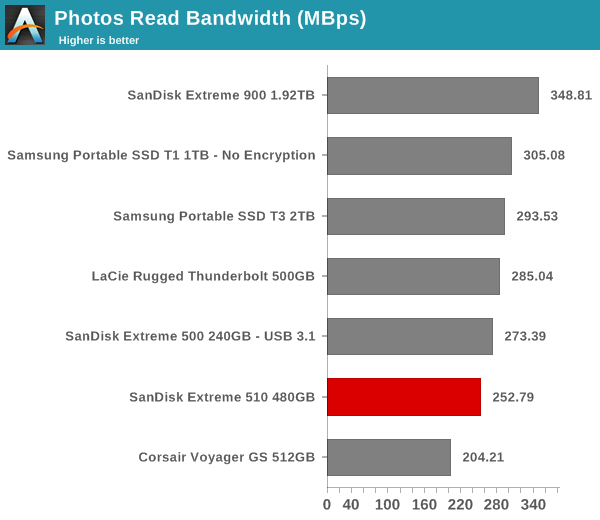 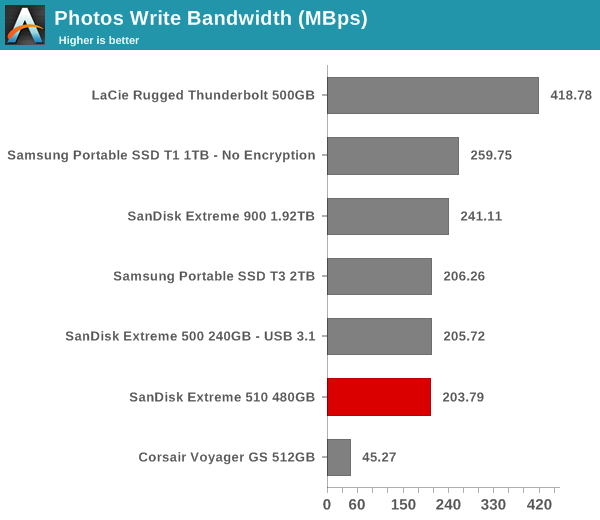 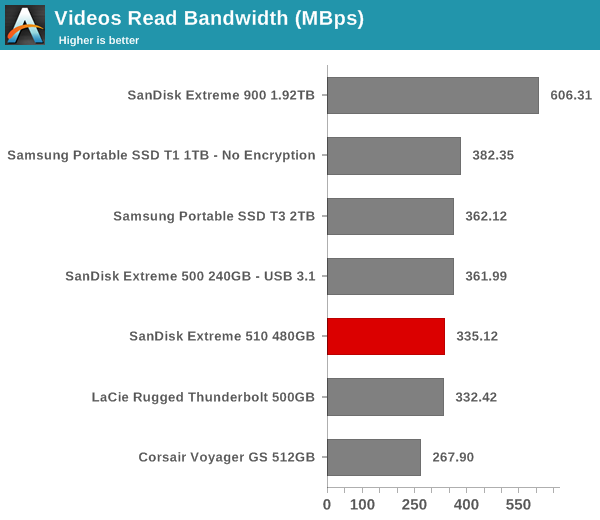 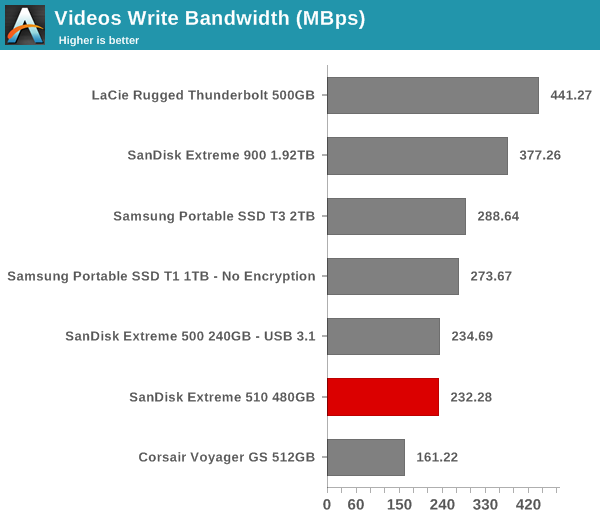 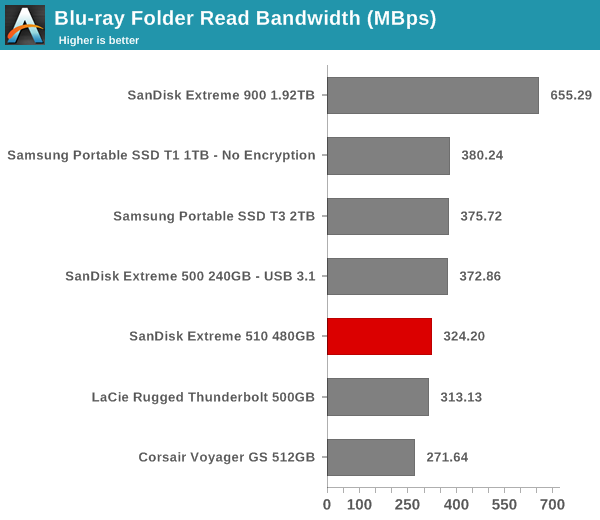 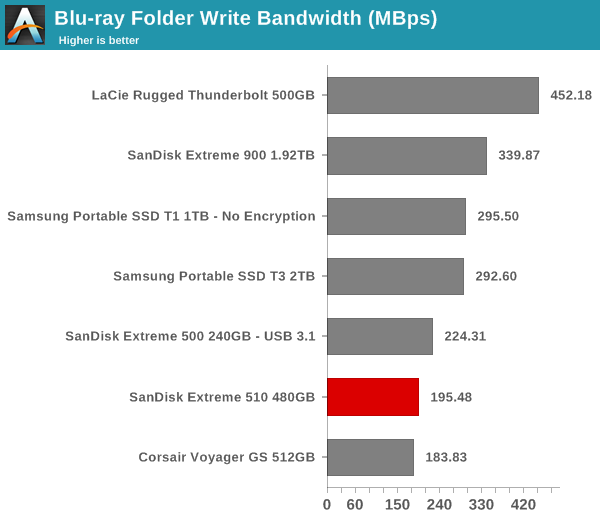 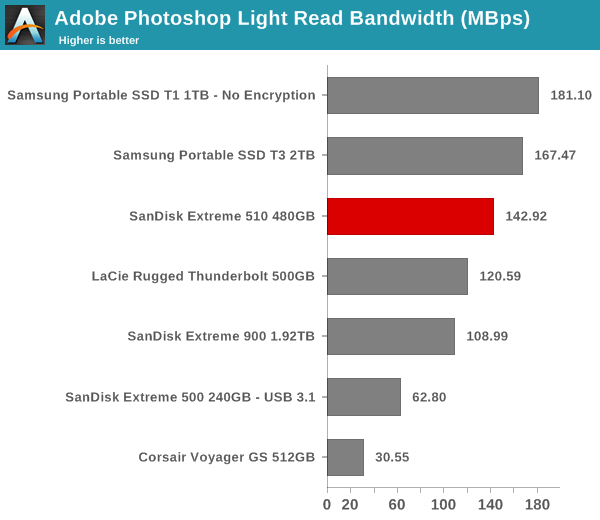 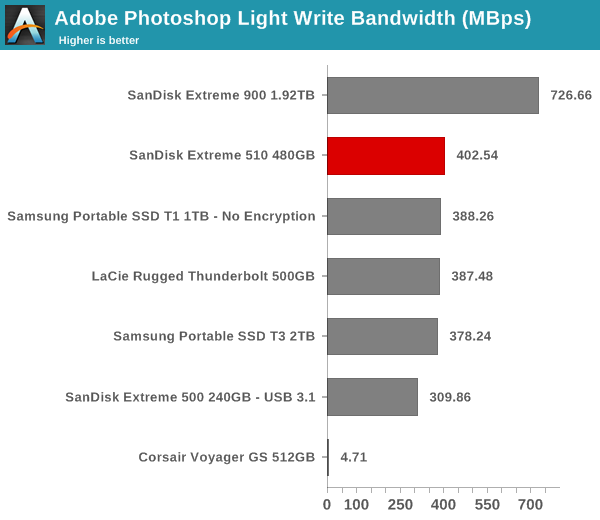 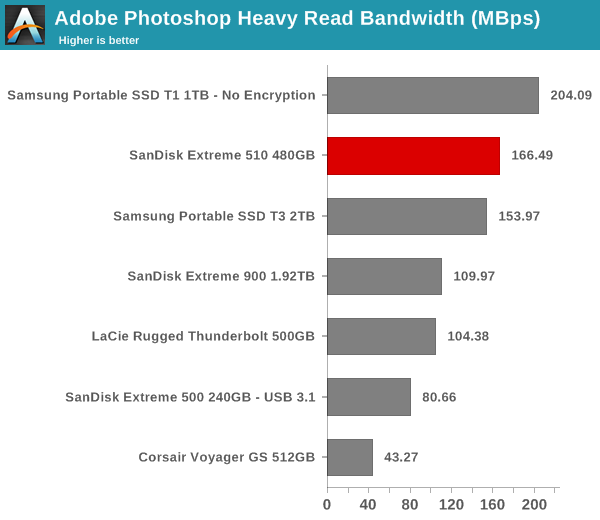 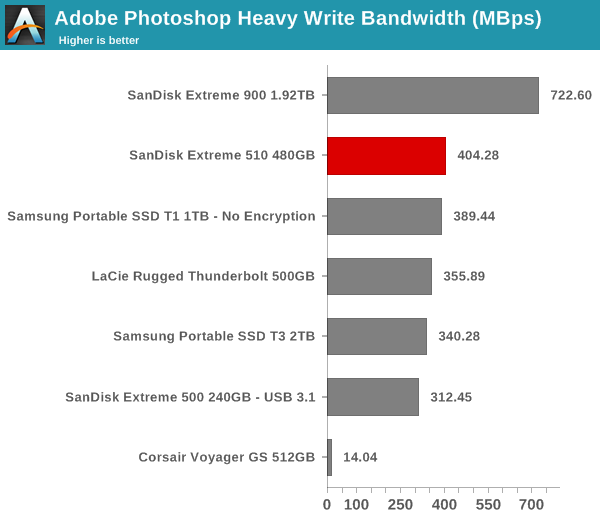 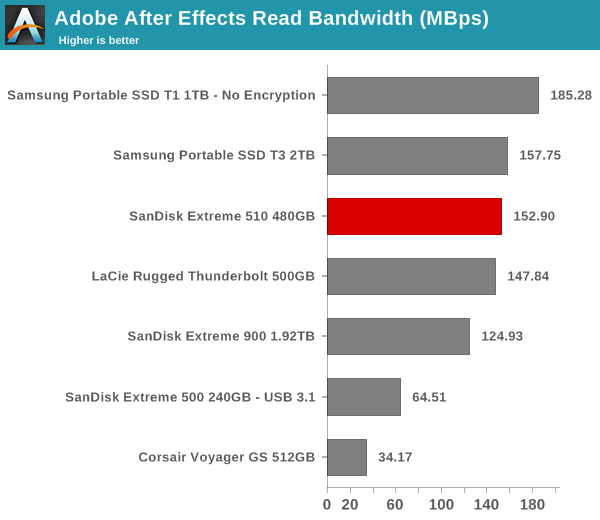 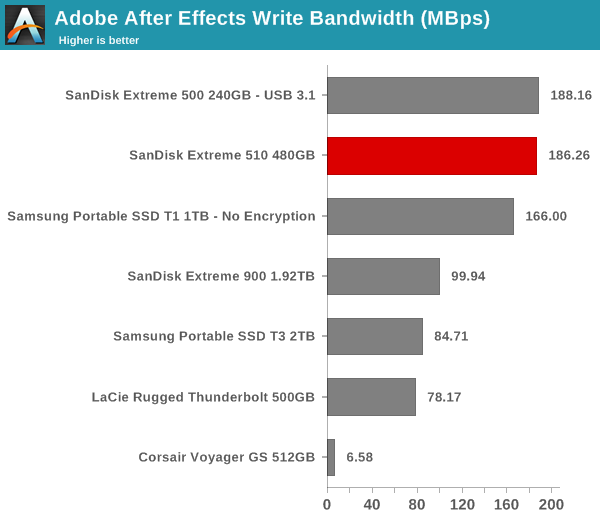 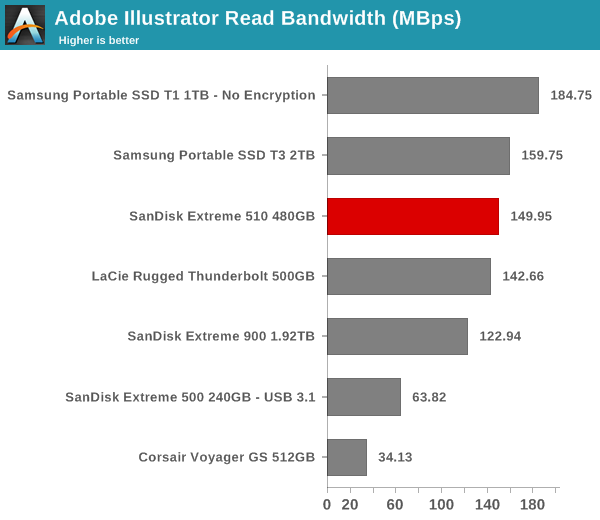 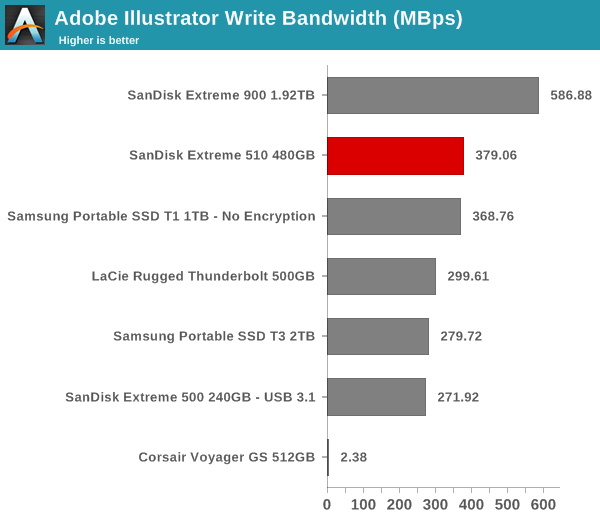 An important point to note here is that each of the first three blue and green areas correspond to 15.6 GB of writes and reads respectively. We do find that the temperature starts increasing sharply within the Photos suite itself. After the temperature reaches 75C (happens after more than 120GB of continuous traffic), the controller starts throttling the transfer rates. 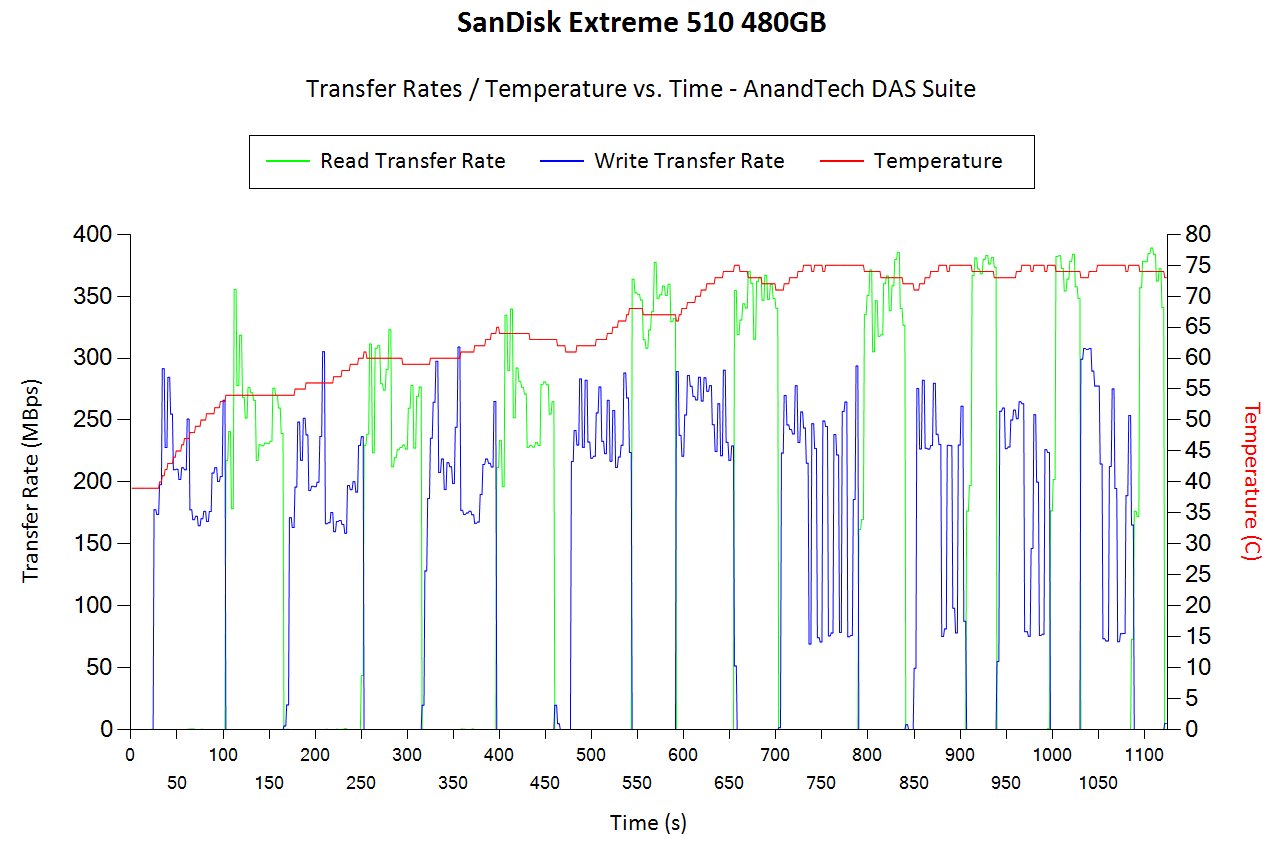 We checked with SanDisk and confirmed that they could also reproduce the problem of extended writes triggering the thermal throttling on the controller. The water resistant coating was cited as the reason. SanDisk stressed that the Extreme 510 is best suited for consumers needing water resistance and durability / ruggedness in their portable flash drive.

Coming to the business end of the review, the Extreme 510 builds upon the proven Extreme 500 design, and adds features required by photographers and other content creators in the field (namely, ruggedness with an IP55 rating).

The thermal throttling under sustained load is a minor point of concern. Given the 120GB of continuous traffic required to trigger the problem, it is likely that consumers are not affected by it in real-world situations. Another issue is that we were unable to confirm working TRIM, even though CrystalDiskInfo states that it is supported. 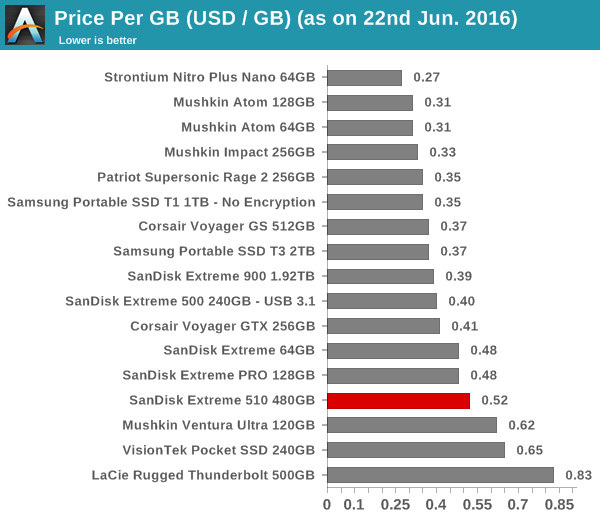 A typical name-brand 480GB GB SSD can be purchased or as low as $110. Even considering a small USB 3.0 enclosure for $20, the combination is definitely a whole lot cheaper than SanDisk's MSRP of $250 for the Extreme 510. The premium is for the smaller form factor as well as the waterproof nature.The IP55 rating does enable the Extreme 510 to effectively target a particular market segment despite the throttling problem. That said, most consumers (who don't need the IP55 rating) are better off with the Extreme 500 Portable SSD compared to the Extreme 510 discussed above.